Another day, another bike ride…

I found this guy slithering down at the stream in the morning.

I set off and soon came upon the first clearing and a deer. It had at least four sucking deer flies, two on its snout. Unfortunately for the deer, they can’t swat them off as easily as we can. Somehow they manage to survive without going crazy though. At least at night the flies go to sleep too. It didn’t take off so there must not be too many hunters up here. 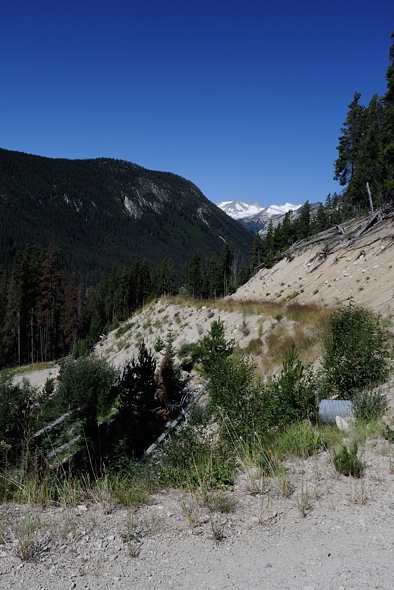 The road climbed up the north side of the valley. It was really hot in the blazing sun. But I knew that I only had about 400 m of climbing to do and it would only take a few hours so I plodded on. I was mostly pushing my bike.

Then the character of the road changed. I was at the end of the forestry road and the beginning of the mining access road. It became narrower and more like a quad track, but still passable for a good 4X4 with a short wheelbase. That mountain is on the other side of the river I wanted to cross. I was actually hoping to get up on to the summit of that alpine plateau there, but I’d have to go way up the valley to get to terrain suitable to climb up.

At the end of the road I found this! 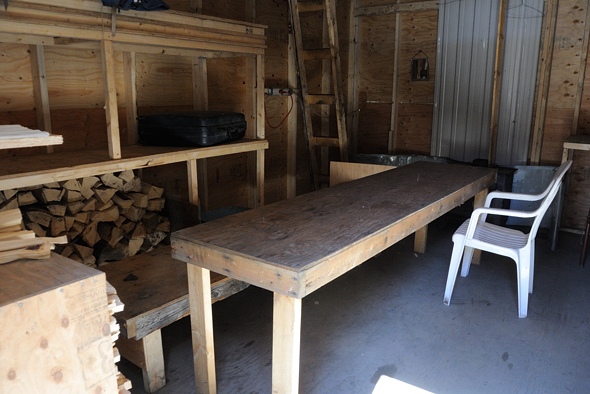 I’ll take it thanks!

Here is a better view from the cabin, across the valley. The river is canyon-like here and too dangerous to cross. And there’s no way I’d be able to drag my gear up that slope. So I’d have to go up to the head of the valley where the river is flatter and the sidehill more gentle.

A hundred meters past the cabin the road ends at a picturesque debris chute (which I didn’t take a picture of).

The penstemon and lots of other flowers were in bloom. The river is glacier fed and silty and therefore not good for filtering as it would plug up the filter element. And it was cold too. But the little stream in the debris chute was clear and warm, not being glacier fed and tumbling down 500 m over black rocks roasting in the sun. It was warm enough that I could have a comfortable splash-bath.

There are interesting hoodoos at the top of the debris chute. There are also some lakes above on the alpine plateau. That’s all whitebark pine at the higher levels. It grows thick here.

I decided to use the cabin as a home base to check out the valley. It was soon apparent that I wouldn’t be able to do my trip in the one week I had off, unfortunately. It would just be too hard to pull my bike up the valley. I thought the road went further up. Tomorrow I’d go hike up the valley to assess just how difficult it would be. So I spent the rest of the day R&Ring.

The flies are attracted to the heat so when I made dinner they were swarming all around and afterwards the stove was full of dead fly carcasses. It reminds me of a funny story from treeplanting in Alberta years ago. You’d think that being the foreman would be the best job — you don’t actually have to do any real work. It’s the planters who are out there grunting in the trenches. Well in northern Alberta our foreman whipped around on a quad checking everything out and hauling boxes of trees around. And of course, the horse flies and deer flies are attracted to heat and CO2 … both of which the quad was producing copious amounts of. So whenever he’d pull up he’d have this massive, I mean massive, cloud of horseflies following him and he couldn’t outrun them. It was pretty funny.

Anyhoo, that Thai Satay dinner was one of the best ones I’ve had in a while… everything seems to taste better when you are pushing hard and need the calories. It started to hit me how isolated I was. With the road closure I had the entire valley to myself. I was a good 60 km by road from the closest person, maybe 30 km as the crow flies if there were campers up in South Chilcotins Park to the north-east. It’s easy to write, “I was totally alone”, but a bit different to actually experience it. It wasn’t a bad feeling; just something I don’t often experience except on these little adventures I do. Few people get to experience that kind of isolation; it’s worthwhile to try to get it IMHO.

In the evening I lay down on my Thermarest on the plywood bed and listened to music on my iPhone. As it got dark I looked out the small window to vaguely see some stars poking through the trees. I wondered about what the chances were that those particular photons, merely a handful of the quadrillions of quadrillions produced by that star who knows how many light years away, happened to travel through so many unbelievably many kilometers, over such a long time, all the while ever-expanding and diluting in intensity to the square of the distance travelled, and somehow manage to get through the atmosphere, between the fir trees above the cabin, through the smudgy little window, and into my eyes and onto my retina, just at the moment I was thinking about them and looking. What journey must that be like from the photon’s perspective? Or is there such a thing as a photon’s perspective? Maybe that reality of the starlight making its way to my thoughts via my eyes only existed because my consciousness brought it into existence. If I wasn’t alive to observe it, was there even any starlight there to see? How is the star any different than me, if it’s all just “One”? I think I need to do some Buddhist practising out here on these trips…

And now back to “reality”:

The next morning (well, more like lunch time) I hiked up the valley. There is a deer trail that is fairly easy to follow. Basically you keep as close to the edge of the river canyon as you can and you’ll find the trail if you lose it. I was encouraged to see that the terrain wasn’t all that difficult, except for a few tricky areas that wouldn’t be too much of a problem.

The trail alternated between forested areas and open clearings like this. 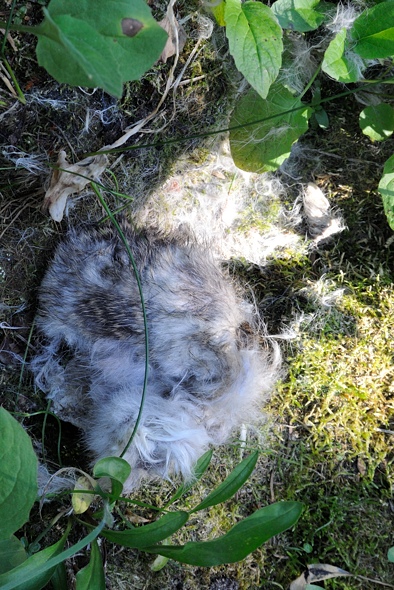 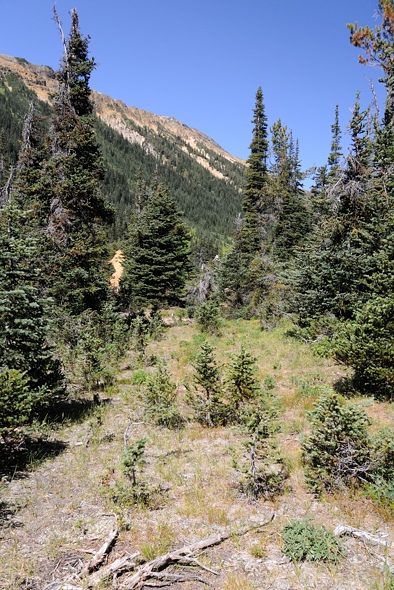 In places I would have been able to ride my bike.

Looking across to the west side of the valley. That green meadow really is a meadow. It’s like your front lawn.

The light green areas are the grassy meadows, easy to walk through. But these are interspersed with willow thickets that get up to head height, substantially more difficult to walk through. Not a problem if you’re just walking but pushing a bike would be a bit more of a challenge. But if you took your pedals off and turned your handlebars it should be do-able.

Looking up to the head of the valley. 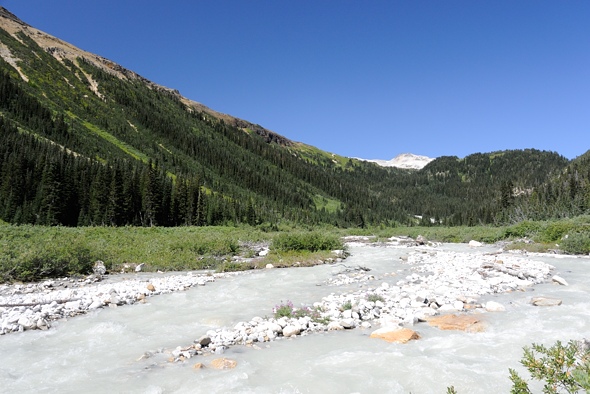 The willow got thicker as I went further up the valley. I went about as far as I felt like going and did some more assessment of the hike up to the alpine. I’d cross the river around here on my packraft and then hike up through the forest at the far end. The willow looked thick, but at least it’s not spiny like devil’s club. The vegetation here is all pretty benign.

I’d go through the forest and emerge in that meadow at the top left.

The flies were driving me nuts but I took out my macro lens and managed to pull a few shots off. If I stayed still for more than five seconds they’d attack me.

And now, for your viewing pleasure, I have put together a video montage of my trip up the valley, including some narration from myself.

I hiked back down the deer trail to the cabin. One person with a saw and clippers could clear a nice trail up that valley in one day. I was disappointed that I couldn’t do my circuit, but what did I expect? I’d never been here before. This was a good scoping-out trip and if I had two weeks I would have been able to do it. Hopefully in September I might be able to get time off and do it then. Otherwise, next year.

The next morning I headed back down.

Looking back up to the upper Bridge River. There is a big icefield up there.

At lower elevations I went through these nice grassy park-like lodgepole pine stands.

Fresh wolf prints were left on my tire tracks from two days before. The grizzly tracks were gone, suggesting that when I saw them they were fresh. I felt like Mantracker, analysing all the tracks I was seeing.

Looking back up the Bridge River. It was like paradise.

There’s even some ponderosa pine here, which likes it hot and dry. 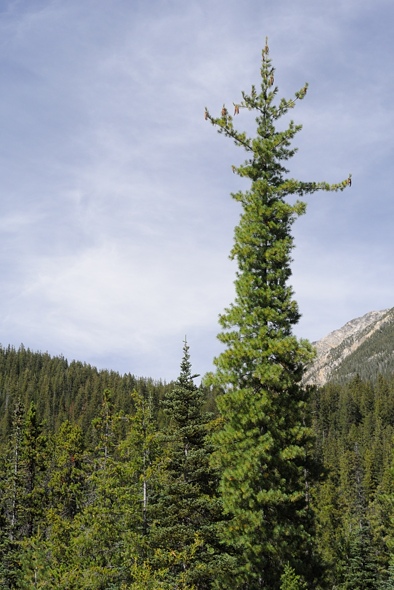 This is western white pine.

There’s lots of wildlife even up here at these higher elevations. 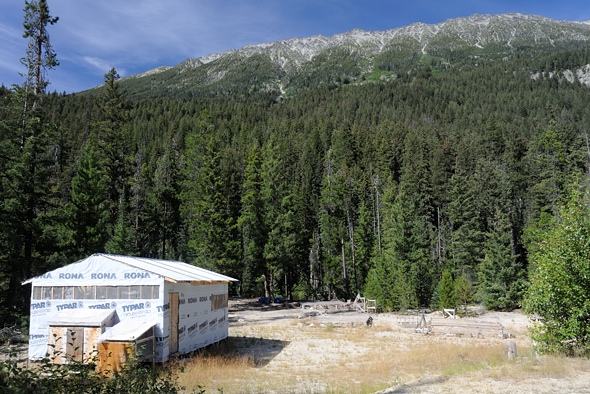 At the Bridge River Bridge is this new building which seems to be some kind of a camp. I took refuge from the bugs there and had some peanut butter on mango.

There were also some more bear tracks here, but this time going my direction so I was coming up behind him. They weren’t very big though.

It was a long day but the kilometer countdown to the car kept me going. 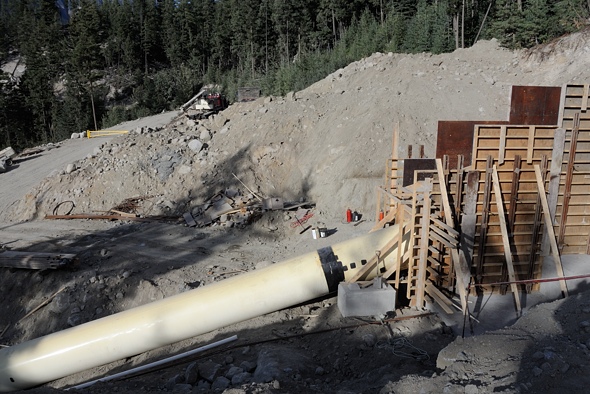 Finally I got to Jamie Creek. 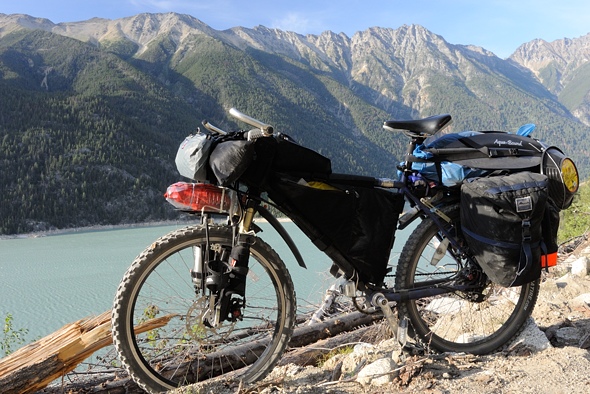 I made it back!

Right across the road was some seepage where I could fill my bottles without filtering.

Here is another video montage of the trip back down, including a demonstration of how to get your bike over a penstock.

This entry was posted on August 30, 2013 by markbc. It was filed under Uncategorized and was tagged with Bridge River.