Like usual I scrambled to get out Saturday morning, not leaving till after lunch. I really need to get packed up a week beforehand so I can just do a final check the morning of, and go.

At Pemberton I turned west and headed up the valley bottom to then turn right onto the Hurley Forest Service Road, which is a fairly rough gravel road that leads northwards over the mountains to Gold Bridge.

Looking back to the thunderstorm that was engulfing Pemberton and areas east. I was worried this might start some forest fires. 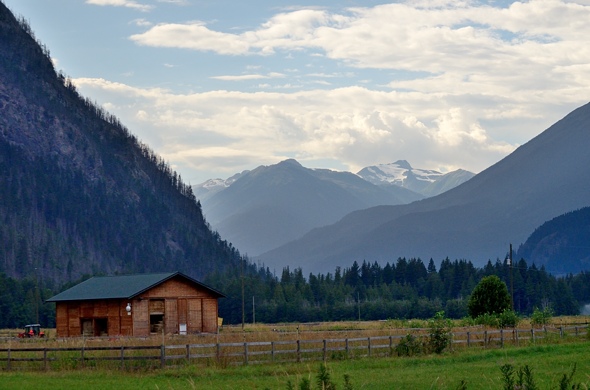 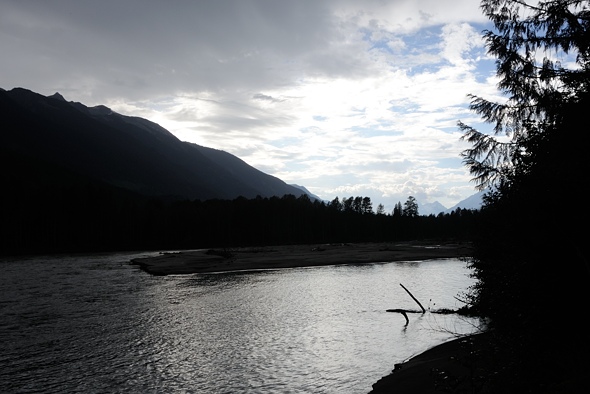 The Lillooet River goes down the Pemberton Valley, feeding Lillooet Lake before becoming a river again and joining the Fraser River near Chilliwack, via Harrison Lake. It would be an interesting circuit to bikeraft someday.

The Pemberton Valley as seen from The Hurley. 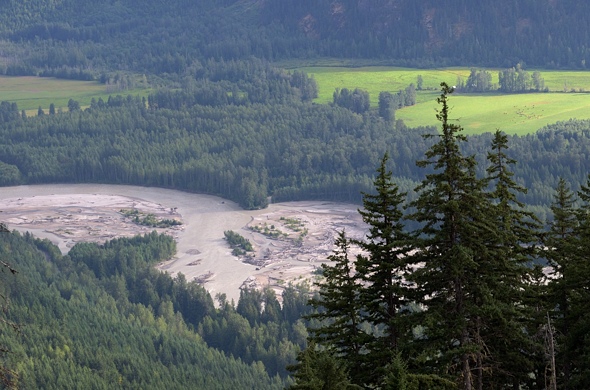 Looking back down to the Pemberton Valley with cows in the fields. 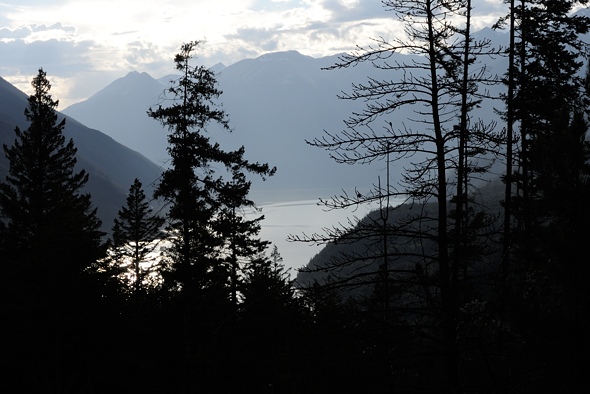 First views of Downton Lake as I descended the other side of The Hurley.

Unfortunately when I got to the Bridge Main going westwards along the lake there were signs saying that the road was closed at km 16.5 due to a run-of-river project under construction. 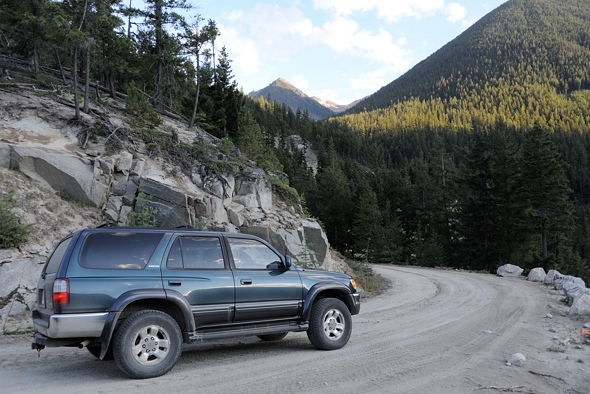 Near the run-of-river works, as far as I could go in the car.

Looking west down Downton Lake, which is actually a reservoir with a dam at its east end.

So I camped in my car at the side of the road a kilometer back. The next morning I spent a couple hours getting my stuff together and noticed that I forgot to pack my morning oatmeal packets! I always manage to forget something. At least this wasn’t critical and I brought excess other food. I finally set off and rode up to the construction site. I immediately met the site safety supervisor who helped me drag my bike under the penstock and up the other side. Here is a video of me riding my bike up to the site and talking like a chipmunk. Unfortunately I didn’t keep the video on as I went under the penstock, which would have been the most interesting part.

The 300+ year old douglas firs being perfunctorily cleared and thrown at the side of the road to make way for the powerline right of way.

A better look at the substantial run-of-river project scarring the landscape.

What all the interest is about: Jamie Creek, which presumably doesn’t have any fish in it. 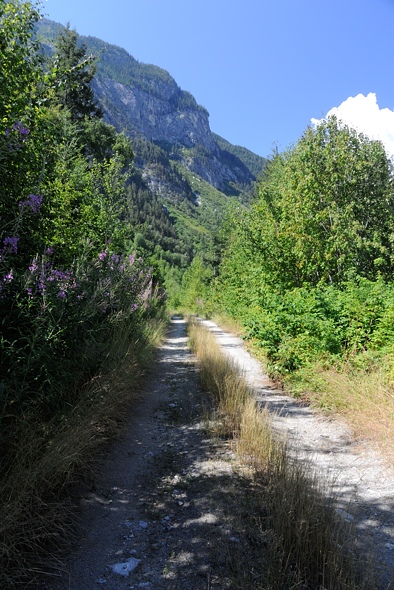 Once over the penstock, I was off. And I had the whole place to myself.

The ground and soil was wet from recent rainstorms. There were butterflies lapping it up and I rode through bursts of colour. I didn’t take any photos though since I was tight on time and their colours didn’t show when they were on the ground with closed wings. 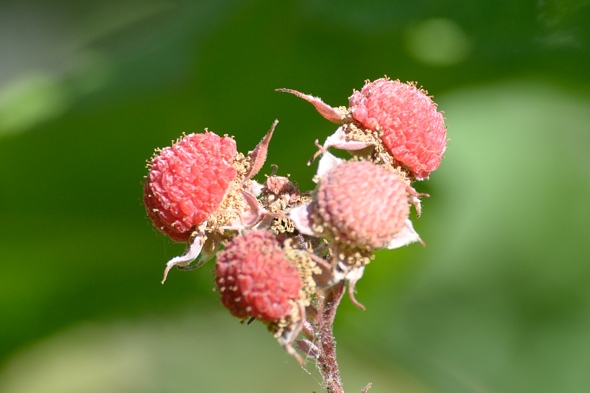 I was stopping every few minutes to eat copious amounts of thimbleberries, which are very sweet and tasty. And there were a few wild raspberries too. Maybe there would be enough berries to make up for my missing breakfast oatmeal.

Here is a GoPro mount on the front fork. It’s a shaky spot but a good view. I’ll have to mount it more sturdily so it doesn’t vibrate.

Here are some more videos. I know they’re shitty but they give an idea of the terrain. 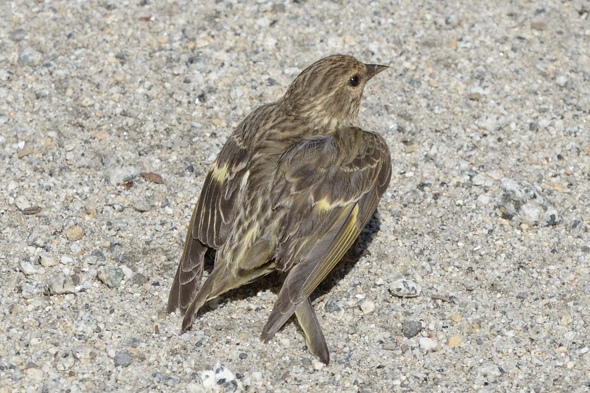 Poor little bird with a broken wing. There wasn’t much I could do. 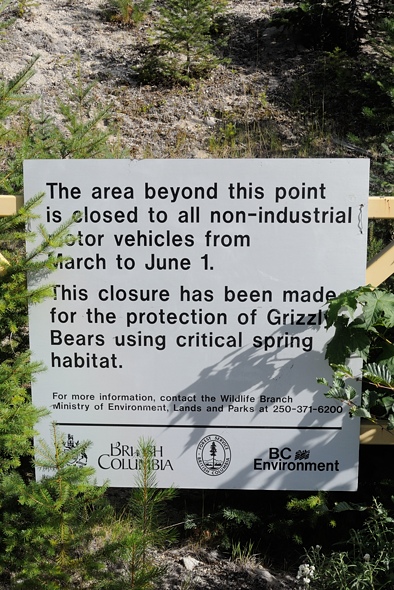 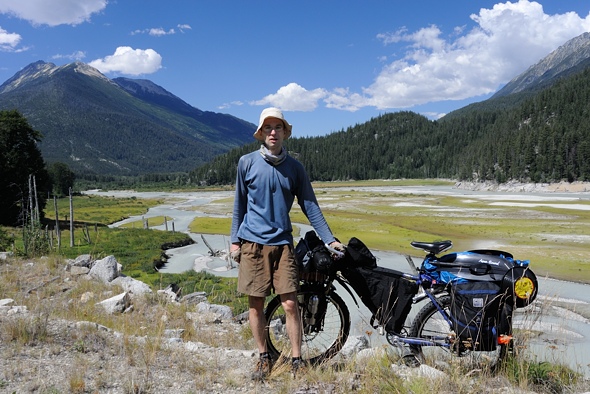 This is at the end of Downton Lake where it transitions to a delta. This is a small provincial park with lots of wildlife (but no bears this time of year). Boy I sure am skinny, eh. But that little body can do some amazing things…

The road began to climb… and climb. I was not thrilled about having to gain over 300 m and then lose most of it again to come back down to the river (although it’s all about expectations. I was expecting a nice flat leisurely riverside ride).

On the descent I caught a glimpse of the Bridge River Bridge at 38 km.

The views opened up to reveal the lush green valley. This is a really beautiful place.

The tree species diversity here is high. It is in the dry douglas fir zone on the east side of the mountains. And since the valley runs east/west, on the north side of the valley you have plants adapted to heat and dryness, while on the south side you have more shade and moisture adapted species. Here on the valley bottom were some larch on the left, spruce on the right, and big douglas firs in the back right. In the foreground are thimbleberries. About the only tree species missing are hemlock and yellow cypress.

Crossing the Bridge River. It is raging here. 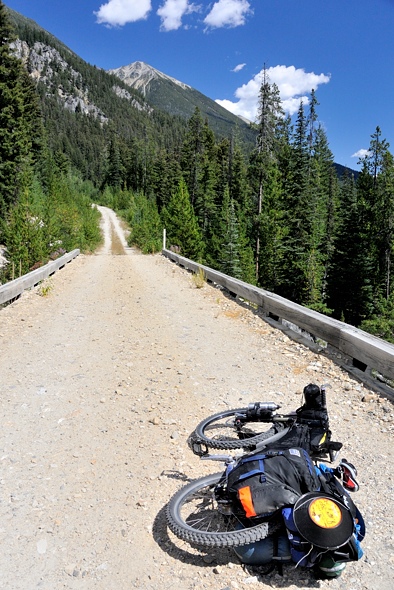 The ride immediately got hotter as I was now on the north side of the valley in the blazing sun. I was really low on water and starting to cramp but thankfully there was a stream a half kilometer past the bridge.

I plodded along and came upon this stash of diesel. 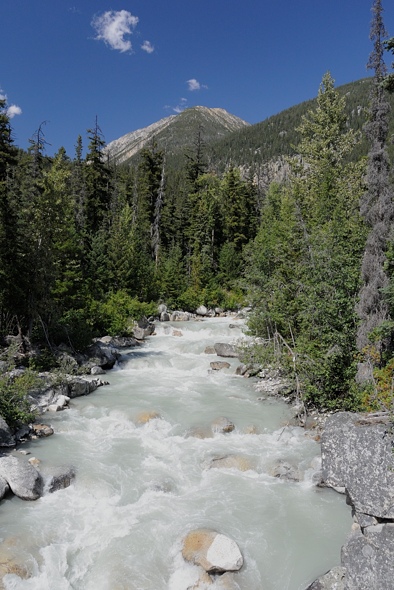 This is Nichols Creek, which is the valley to the east of the unnamed valley I was going to go up. The bridge over this creek is in rough shape, I don’t know how much longer it will be drivable. That creek is too dangerous to cross without a bridge. And the road is deactivated at this point so if the bridge goes, who knows if it will be replaced.

I just kept hammering in the heat. The scenery was very beautiful, but I can sometimes tune out where I am if I am doing intense physical activity. Here I had reached my limit and had to take a break to eat some food and drink some water. I was using Nuun electrolyte tablets in my water which seemed to be working and keeping the cramps away.

The flies were really bad. They were both deer flies, which are pretty big and take chunks out of you, and also smaller house fly-like things that, unlike house flies, bite you. I had to pitch my tent to get away from them for half an hour. While lying there looking at the swarm of flies on the screen of my tent, I noticed a deer fly preening his appendages. Then, seconds later, a wasp came by and grabbed him and ate him on the spot, on my tent. It only took a minute to turn that preening deer fly into mince meat.

This is what I ended up doing on any significant ascent:

I continued on and was concerned about bears. The problem was all these berries at the side of the road where a bear could be hiding, blissfully unaware of my approach until I was on top of him. And the wind was blowing against me, coming down from the mountains from the west, so a bear wouldn’t smell me. Plus the wind was noisy so he wouldn’t hear me either. My bear bell was pretty wimpy, and really more suited for hikers who move much more slowly. I yelled every time I approached a corner.

I came upon this set of prints from the King of the Valley walking in the opposite direction I was riding, meaning I had already passed him. I’m not sure if he heard me coming and took off or just left the road before I came by. I guess I’ll never know… Luckily we didn’t meet. That was a BIG bear. 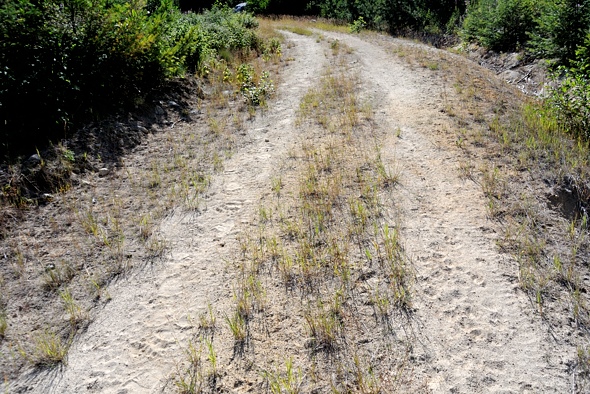 With the road blocked off there was no vehicle traffic. The wheel tracks became highways for wildlife, covered with deer, wolf and bear tracks.

I stopped to filter water at this idyllic little stream. You can’t really see it in this picture, but the flowers were really pretty.

I was mostly climbing in elevation, going up the northern side of the valley. This is looking back to where I came from.

It is a very scenic valley.

I called it quits for the day, about 5-10 km from the end of the road; I wasn’t quite sure how far it went. I found a nice spot where it levelled off and was near a stream. No worries about blocking traffic here… 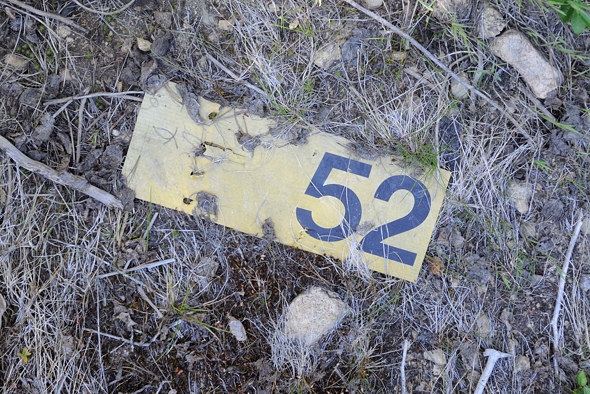 Camp just happened to be at the 52 km mark. I started at 15.5 km that morning, so I did 36.5 km that day. It was a hard ride though, with the heat (30 C +), and altitude (1100 m), and total elevation gain of about 800 m including the little escapade up and down the other side of the valley. Plus I had the weight of all my gear. I was pretty beat and didn’t sleep very well because of that.

This entry was posted on August 20, 2013 by markbc. It was filed under Uncategorized .