I took my new Pugsley out to Buntzen Lake this weekend. I wanted to try out the bike on the packraft but didn’t want to get salt water over everything, and Buntzen is the closet place you can do that without dealing with whitewater in the North Shore rivers. I paddled down the lake with the bike on the raft, then biked back with the raft on the bike. It worked well. It was in part preparation for my upcoming Mexico trip (I’m going to try Salsipuedes Canyon again), but also it’s just great to get out there and have some fun!

This is a nice area just outside Vancouver. It is a gateway to a lot of very rugged back country terrain. Technically you aren’t allowed to overnight here, but I’m sure if you hike back into the boonies no one would know or care. The issue is the parking gates close at night and you aren’t allowed to park overnight.

I got there after lunch, using up about a third of the charge in my car to get there. I had no heat, to conserve battery, and it was just above freezing. But I was all bundled up. While getting the bike together a BC Hydro truck pulled up and and asked if I was going out overnight. I said, “No, I’m just going up for the day.” “Well you look like you’re going camping”. “No”, I replied, “that’s an inflatable boat on my bike”. Oh cool, well have fun! “Sure,” I said, “the gate closes at 6 right?”. So I had a few hours to go up the lake and back. 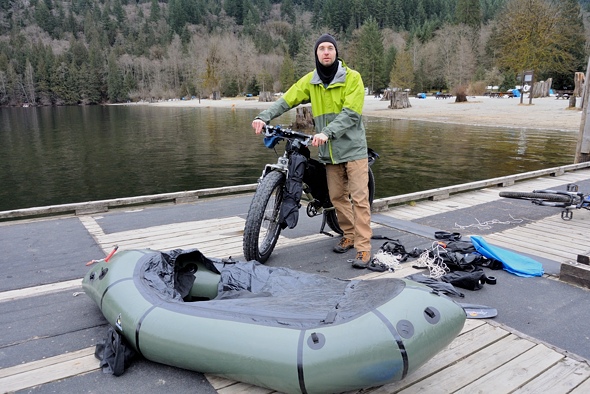 I rode out onto the dock to do the switcheroo. Last time I was here was last winter. It was about the same temperature but blowing hard. It wasn’t pleasant out on the lake that time, especially since I had to paddle back into the wind.

Everyone looks and asks about the bike. That day I had three people ask if the bike is “electric assist”. I’m not sure why. That’s one of the biggest drawbacks to fatbikes, is the attention they attract. It’s fine up here since I love talking to people about all this unusual equipment I have, and to spread the sport. But in certain parts of the world, you really don’t want to attract too much attention. 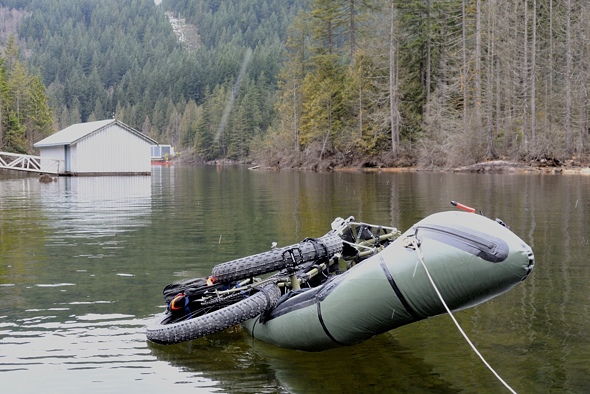 It’s a little lop-sided with no one in it.

Thankfully there were lots of interested people around who were willing to take my picture.

I had a pleasant 45 minute paddle down to the end of the lake. It was spitting a few snowflakes but didn’t amount to anything. Near the end a headwind picked up but I just hugged the shoreline.

At my destination, the dock at the other end of the lake. Another guy came down to ask me about it, and asked if it was electric assist.

No wet feet at all this trip!

Back up and ready to go. I’d cross that bridge and take a multi-purpose hiking / horseback riding trail back. You aren’t allowed to paddle past the bridge as that leads to the intake for the hydroelectric penstock which goes down to the power station on Indian Arm. 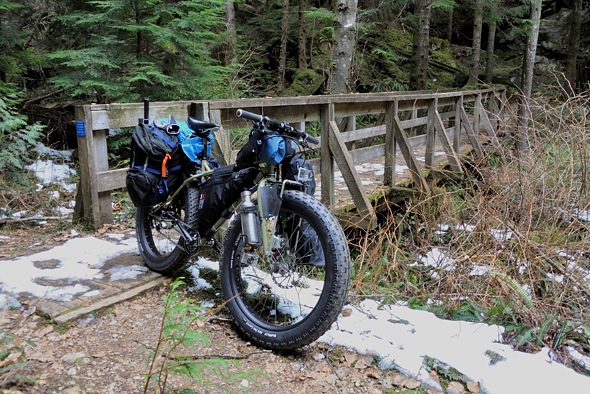 I took the “Lakeview Trail”, which actually only had about one view of the lake, filtered through the trees. It is fairly steep, going up and down along the ridge back south. It was nice forest and somewhat technical. Despite all the gear, the bike remained nimble; mostly due to the weight on the front being centred as close to the fork and bars as possible. I had the tire pressure too high but that was OK because I wanted to see what would rattle off, having just been put together.

During the ride I noticed that something seemed loose in the pedals. It got worse and worse and finally I decided to take a look. The crank arm bolts were coming loose! I tightened them up no problem but I hope the trail grit that was sticking to the grease doesn’t cause any issues. I’ll spin it really carefully at home to listen for any grinding.

This Gopro mount works pretty well. The others I tried vibrated too much; I’ll have to brace them some more.

Before I knew it I was crossing the lake on the floating bridge and back by 4:30. They even had a bike wash station beside the parking lot!

I took off the left pedal and front wheel and threw the bike in the back, and proceeded to drive home heat-less.

All in all, a great time was had by all, and all was me.

This entry was posted on March 3, 2014 by markbc. It was filed under Uncategorized .