I’m reminded why I love bike touring so much. I’ve long been a fan of Lee Lau‘s mountain biking / skiing adventures. So I decided that it was time to get off my butt and do something with my weekend, since it had already been 4 weeks since I finished my latest kayak adventure… (I’ll get back to writing that trip up too, I’m a bit bogged down right now).

A guy at work had recommended High Falls Creek up the Squamish Valley so I pulled up Google Earth, did some Google searching, and put together plans for an overnight mountain biking trip. I was going to circumnavigate Cloudburst Mountain by riding up the gravel road to the pass at Tricouni, then descend down the other side to the Cheakamus Valley, and then climb back up over to the Squamish Valley, where I left my car.

After a lazy Saturday morning I barely got out of the house before noon. I had been fighting a weird lung infection for a few weeks and it felt a bit better, but not really. I wasn’t sure what to expect of my body but I wasn’t going to waste a perfectly good weekend.

I drove through all the tacky “development” along the Sea to Sky Highway until finally getting away from that madness when I turned off into the Squamish Valley which thankfully hasn’t changed at all over the years.

I pulled up beside the golf carts to plug in at Camp Squamish. Is that what my car is? A glorified golf cart? 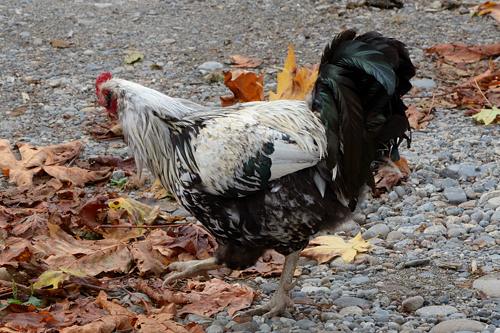 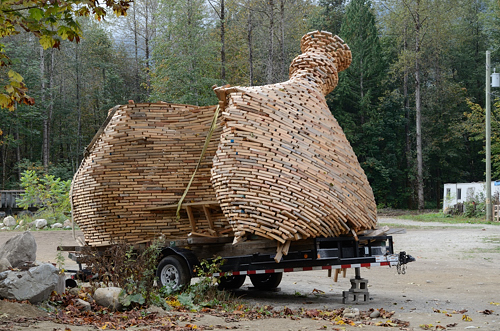 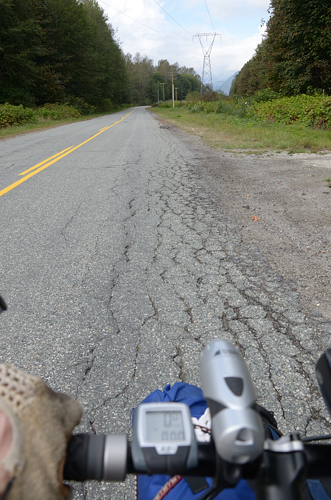 A little intimidated by what I was in for, I set off. I had 10 km of flat valley bottom riding before the spur road climbed the sidehill. 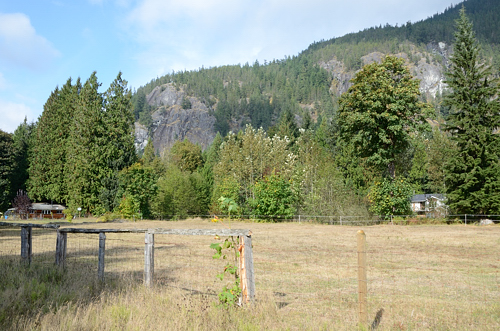 Nice pastoral scenery along the valley bottom. It has been very dry, with only one rainstorm in the last 3 months.

Shortly afterwards the pavement ended and I left the private lands and entered “Tree Farm License 38” which, despite being logged out, is still publicly owned Crown Land. There was a First Nations settlement agreement recently however which transferred title of a large amount of land over to a group that will hopefully better manage the resources than our culture has. 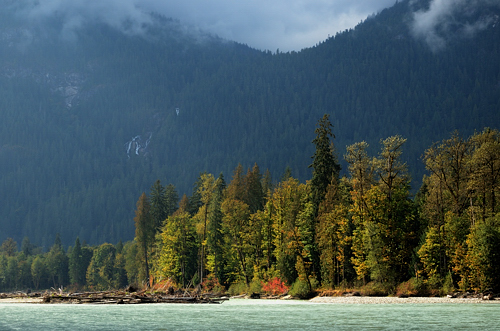 A hydro power plant on a tributary of the Squamish. The water comes all the way down those penstocks from above. The amount of power produced is proportional to the pressure (height of water), so you can see they get lots of power from that.

Soon after the power plant is the trail for High Falls. Unfortunately it is way too steep for a bike so I had to ride up the gravel road that hikers who hike up the falls hike back down to return to their cars. 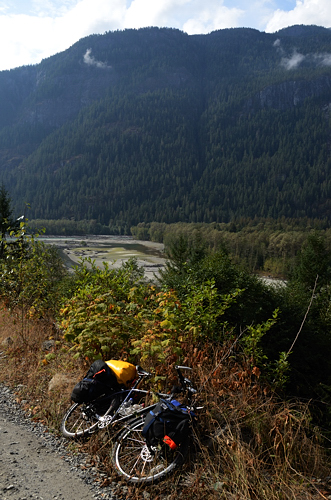 The views got better and better as I climbed.

And climb I did… Thankfully, my lungs and body performed admirably. 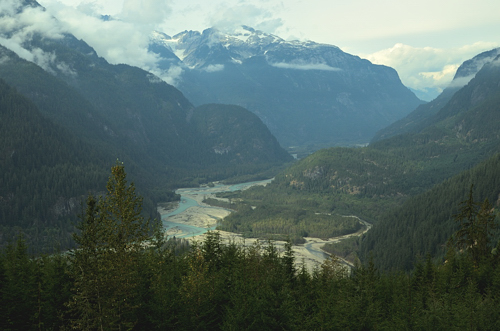 Looking Up the Squamish Valley

I passed three groups of hikers heading back down. They were all impressed with me riding my bike up, not seeming to give themselves credit for hiking up the falls themselves. It’s harder walking…

As I rounded the valley the road levelled off a bit. That’s Cloudburst Mountain poking through the clouds.

Crossing High Falls Creek in the high valley above the waterfalls.

Up and up some more

After a few hours of hard climbing I reached 820 meters elevation, up from 50 m where I started. This was near the end of the road.

The fireweed had finished for the season, going to seed. This is very near the end of the road, at least as far as I went on it. 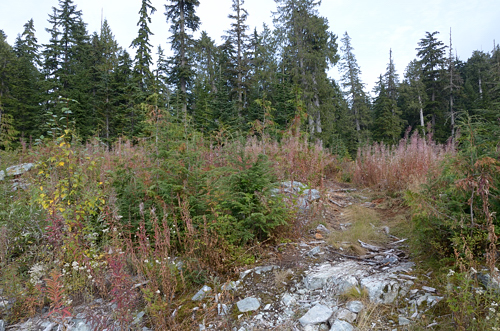 Since logging roads go up to the pass from both sides, the Cheakamus and Squamish valleys, and almost but not quite meet, being only a kilometer apart, my intuition and Google Earth skills convinced me that there must be a way between the two valleys. My intuition proved correct, as this quad trail led from the cutblock through the old growth forest to the other side.

I set up my GoPro video camera on my chest for the trail ride but unfortunately it was aimed too low and the footage was ruined.

Yeah! So stoked that everything worked out as planned. Here I had just emerged on the other side, in the Cheakamus drainage now. I had good cell phone reception so I called my mom.

From here I could see across Cheakamus to Garibaldi Park and Black Tusk. I have hiked up there many times, but never actually climbed the Tusk itself out of a fear of heights (and large falling rocks from climbers above). That’s the microwave tower to the left, which may have be providing the cell signal, I’m not sure. 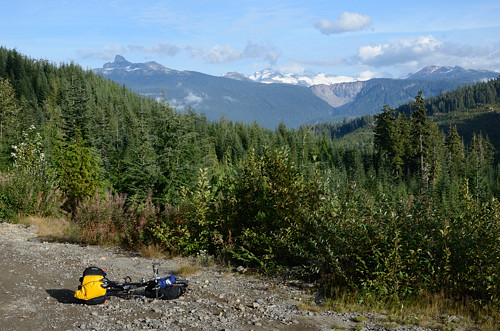 Wider panorama of Black Tusk and The Barrier

This is The Barrier. It is a crumbling cliff face that holds back the quite large Garibaldi Lake. I imagine some geologists have probably studied it, but I would not want to be anywhere near that valley in a big earthquake.

I turned back up the road going up to Tricouni to get away from the cooler and noisy valley bottom creek so I could set up camp. I found a great spot just up the hill. 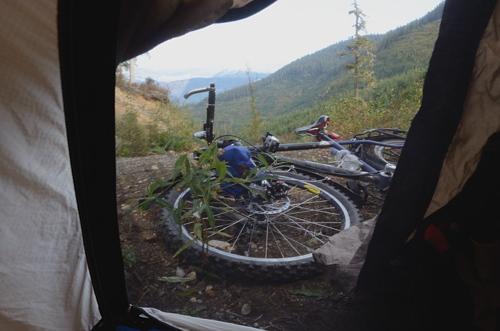 What every man wants to see outside his tent.

I pulled out my iPhone and surfed the internet. Internet in the wilderness! I was so content. Everything had worked out perfectly. My bike worked great, and my body was fine. My worst booboo was from when my D7000 camera that was strapped around by back came flying to the front while going down a steep section and whacked my funny bone. Man that hurt!

Poking my head out the tent before sunset 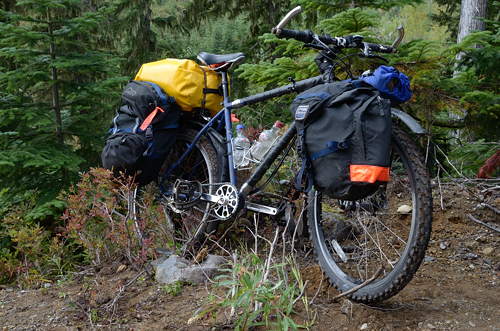 Ready to go in the morn

Good to see the bears are getting their phytonutrient antioxidants.

Some valuable yellow cypress left behind. I don’t get it. Each of these logs is probably worth $10,000 but they were just sitting there. 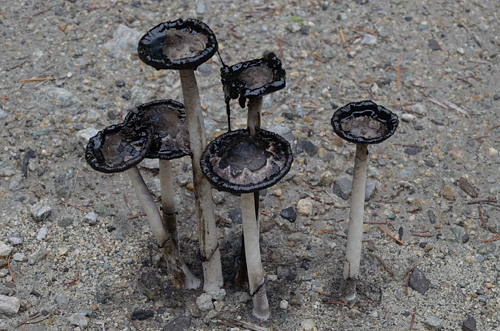 Slimy mushrooms growing out of the road 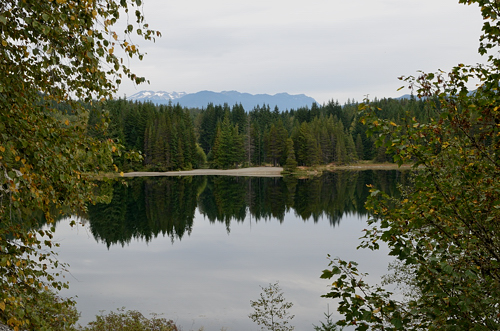 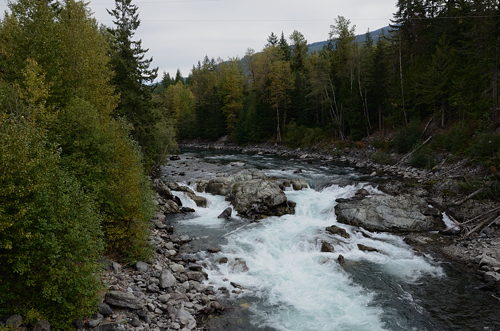 Crossing the Cheakamus River. It’s quite a bit smaller than the Squamish.

Yet another view of Cloudburst Mountain, partially obscured by clouds. 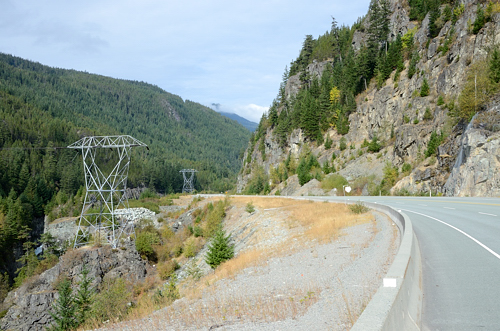 Unfortunately there doesn’t seem to be a way of avoiding a few kilometers of Sea to Sky Highway for this circuit. At least all that “development” brought good bike lanes.

Tantalus Range, on the west side of the Squamish Valley (right where I parked my car) 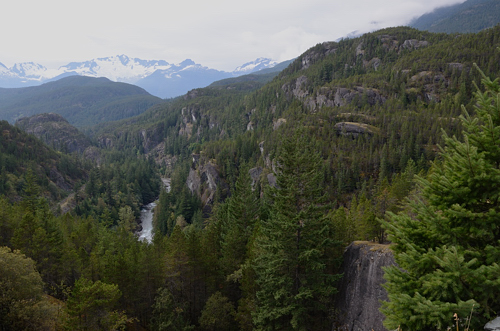 There is a trail that follows the Cheakamus Canyon and spits out on the highway. It was here that I left the highway and descended into the canyon. It is an old cattle drive trail from the 1850’s. I also rode up it many years ago in the Cheakamus Challenge mountain bike race.

This is why the trail goes up to the highway and ends — an impassable canyon, and the railroad crosses the river. I am unsure if there is a trail going north on the west side of the canyon, following the railroad. It would be nice if there is since that means the highway section could be avoided.

It’s a little eroded in places.

Nicely upgraded … yeah right! More like shale hell! I guess they hadn’t finished their work and there were lots of sections like this with unridable loose shale thrown down. I hope they’re going to fill that in with some fine material, otherwise they’ve ruined the trail! I had to stop and tighten my racks at one point as they were rattling around. For this kind of offroad riding (which is basically all I want to do) I would like to try to get set up more like a bikeback, which doesn’t use racks and panniers, instead strapping sacks and bags strategically around on the bike frame. Less stuff to weigh you down and rattle off. Less space too, which forces you to take less stuff.

There is a pedestrian bridge across Cheakamus River. 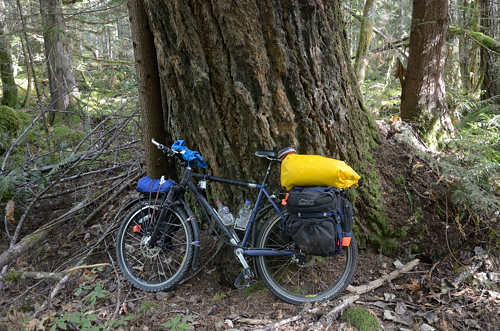 From the bridge there is a trail that goes up to meet a road leading to Butterfly Lake at the top of the hill. This road starts from right where I parked my car. So my plan was to go up this trail and ride down the road on the other side to complete the circuit. 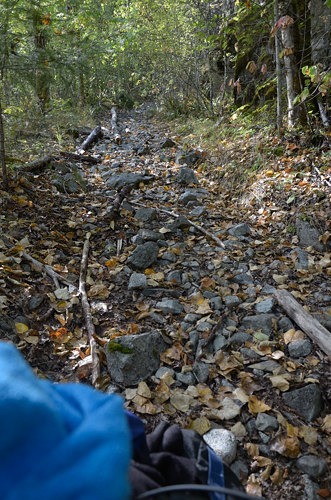 Once away from the part of the trail that serves the private residences along the river, the trail seemed disused. At the first switchback it turned steep. And washed out. Brutal. 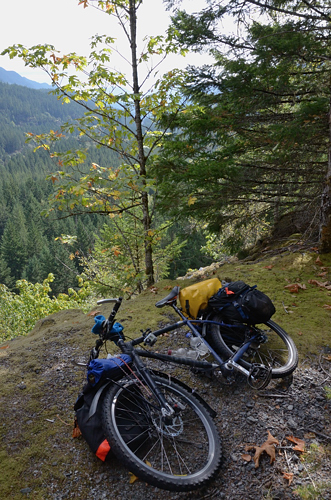 The washed out brutal steepness continued for quite a while. I was hoofing my bike up for about an hour and a half. I had only brought 500 mL of water and there are no creeks. I ran out. I was getting worried. There were a few places with views across Cheakamus to brighten my spirits. 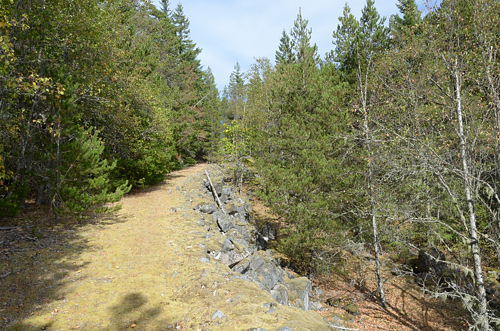 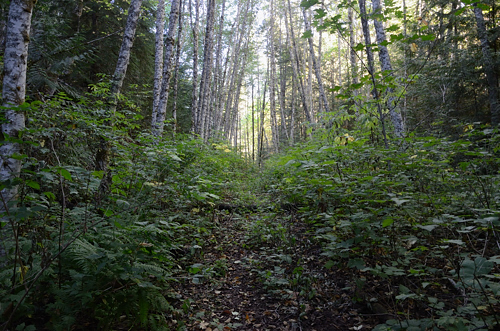 As I was beginning to get a really dry mouth and an uncooperative body I summitted the pass into the Squamish Valley. Whew! After some equally brutal, unridable descent I met up with the well groomed road. 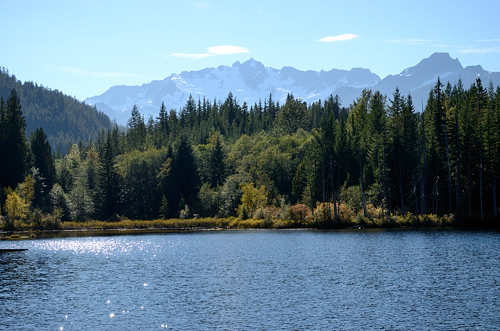 Within a minute I reached Pilchuk Lake. What a wonderful relief that was! As I was getting my water filter set up an SUV came by. They were residents up at Butterfly Lake. This road is private but they were friendly and I don’t think they minded that I was there when I told them where I had come from. They told me that the trail I hauled my bike up used to be their road in! Wow, I guess they only used quads before… 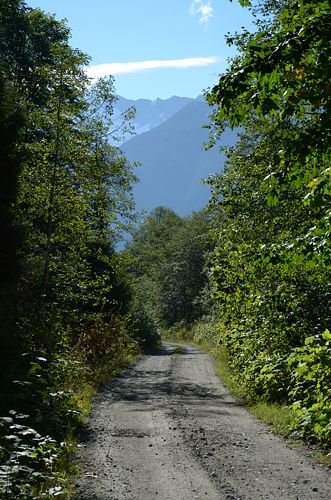 Nice scenery riding down towards the Squamish 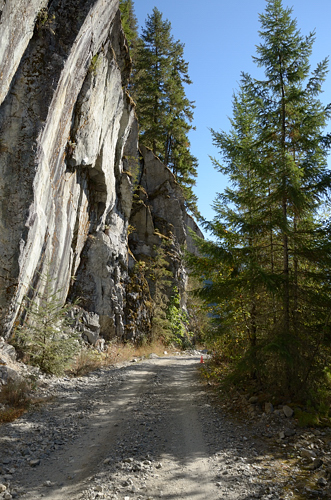 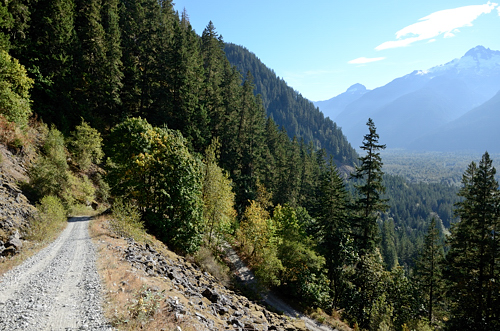 My only damage, from getting whacked by my pedal. I also lost my front mudguard.

Well I had made it. I was so glad how it all worked out, and it was only like 3:30 in the afternoon! All the distances seemed to go by so fast! I think that has to do with spending so much time in my kayak lately where I’m thankful if I can maintain walking speed. Total distance: 52 km.

The daytime heating had created an inflow wind at Squamish and the windsurfers and saiboats were out taking advantage of it.

Well that was a fantastic trip. I have been out of commission for a few years due to my physiotherapist-inflicted leg injuries, limping for 2 years and on crutches for 6 months, and I was wondering if I’d ever get back up to speed. One day, years ago, I had done a big adventure where I drove up to the Black Tusk microwave tower, left my bike there, drove down to the Garibaldi Parking lot, then hiked up to the Tusk and rode back down to my car, all in the same day. Well this adventure was along those lines so I guess I haven’t lost it! I’m back baby!

This entry was posted on October 7, 2012 by markbc. It was filed under Uncategorized and was tagged with Butterfly Lake, Cloudbust Mountain, Tricouni.