This year I decided to drive up to Port Hardy and park the car in the airport lot for the duration of the paddle ($30).  A bit more gas money, but cheaper in other ways. But WAY more convenient. Cars do have their advantages…

After sleeping in the back of the car at the downtown Port Hardy wharf, I showed up to the airport mid-morning and wandered in and heard an announcement for a flight to Ocean Falls, then asked the counter girl if that would have bee the flight I wanted. She said no, the one I wanted, to Owekeeno (a village up Rivers Inlet), was just about to leave. So I ran back to the car to get my stuff organized, ran back in to get a parking ticket, ran back out to put it on the dash, then started organizing my stuff into bags on the lawn. We were already late leaving so the pilot and counter girl came out and helped carry my stuff on as I ran onto the plane. My kayak is so versatile…

I had four fellow passengers, government officials who appeared to be on a First Nations treaty negotiation trip out to Owekeeno. 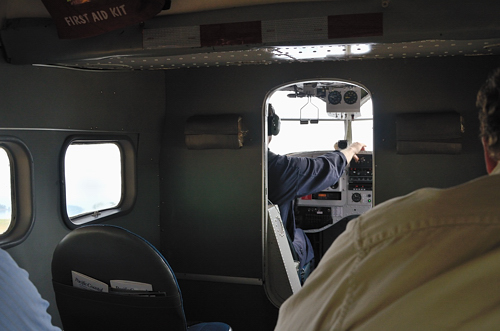 Back in a Grummand Goose 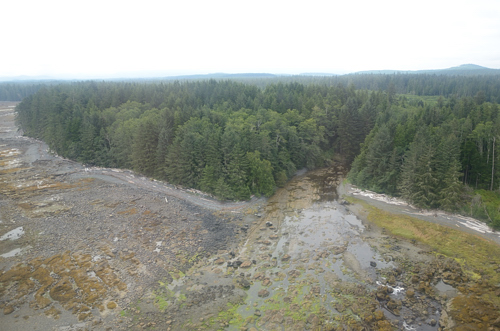 One of the rivers of Vancouver Island emptying into Queen Charlotte Strait.

The weather was low marine cloud and we were soon above it as we headed north across the Strait. I saw a whale down in the open waters. 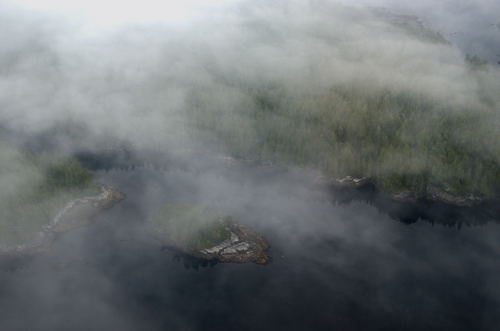 The clouds soon parted enough to reveal islands below. 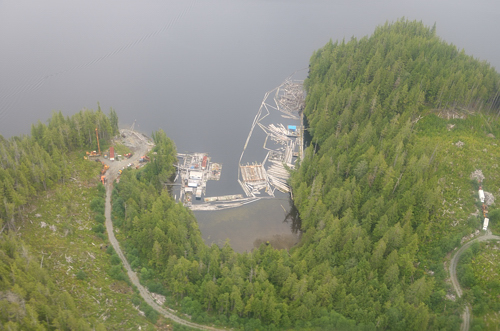 It was a little hard to figure out where we were going with the clouds but it turns out we were headed up Belize Inlet! That’s the empty logging camp I stayed at the first year when I was heading back out across to Port Hardy! 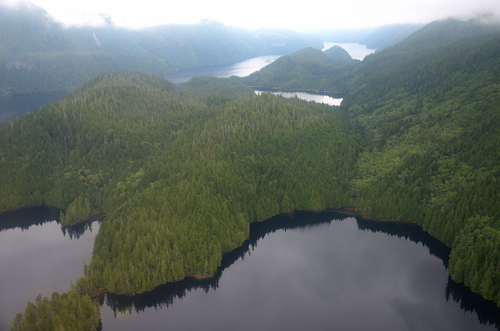 That’s looking east across to the inland section of Mereworth Sound in the far back, with the 12 km logging road portage I did the previous year being off frame to the left. 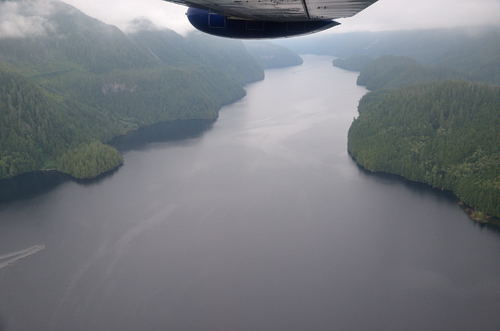 Looking east up Mereworth Sound from above the logging camp where my portage last year started (to the left of frame). Then we flew up Mereworth, where you’re looking. It was a great treat to be flying over the places I had paddled previously. I thought we might fly over the pass to Long Lake where my first failed bushwhack attempt took place. But then we turned around. I’m not sure why we took this detour. Maybe the pilot thought we could get over to Owekeeno faster via Long Lake but then decided the clouds were too low. 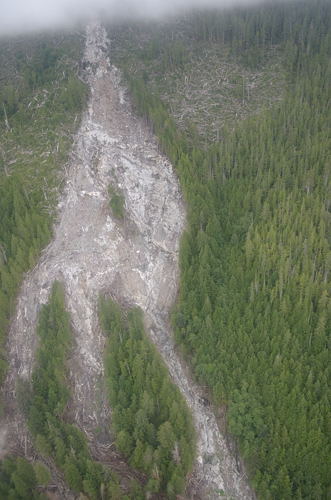 A fresh slide above Mereworth. There was  more fresh logging up the Sound this year but I don’t think this contributed to the slide. They just seem to happen. We went back out to Belize Inlet and crossed over to Smith Sound behind Cape Caution. 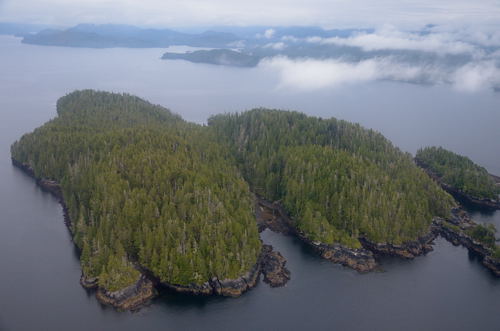 One of the islands in Smith Sound. 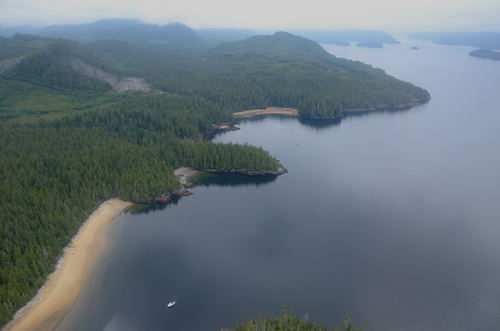 The brown beaches I encountered last year during the heavy rains were still brown. 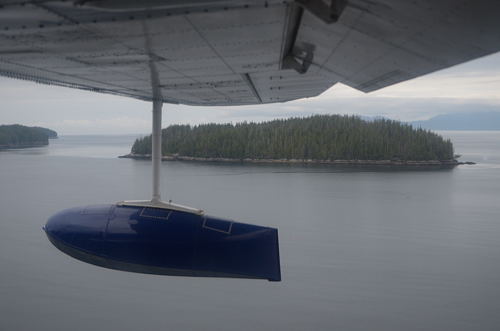 We crossed over to Goose Bay to drop me off. 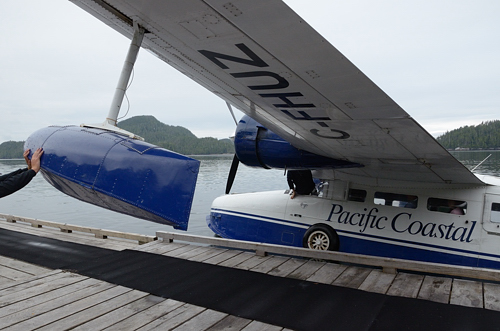 They look kind of awkward in the water, leaning to one side. 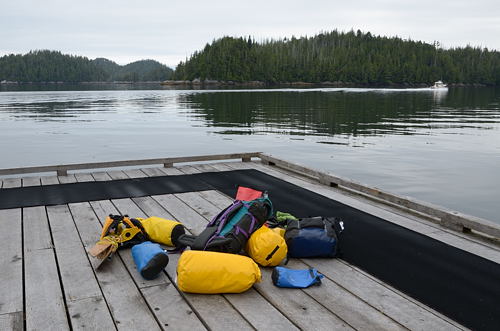 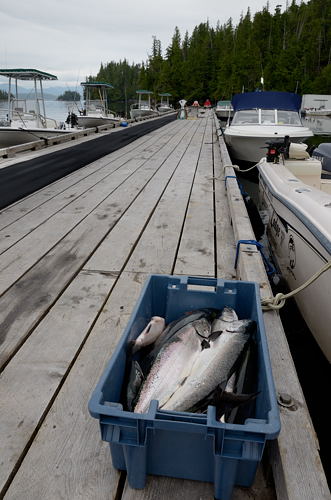 Lots of fishing charter boats came back for lunch with their catches. These are chinook and coho. I asked if there were sockeye and he said they are prohibited. Owekeeno has a big lake, which sockeye need as part of their life cycle, but the run was fished out a century ago. “You have to go to Alberni for sockeye”. Ironic how out here in the wilderness the sockeye are in worse shape than in Alberni. Although Long Lake had a nice run the previous year. I’m sure we’ll pounce on that soon enough. 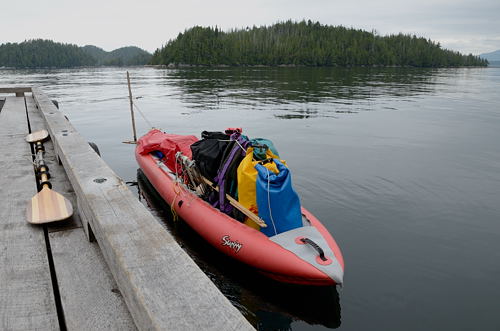 After lunch and topping off my laptop battery, I was ready to go.

Soon another Goose took off near me. 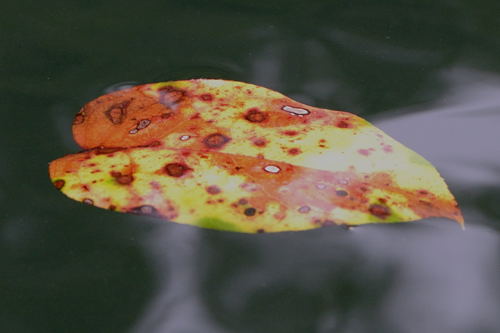 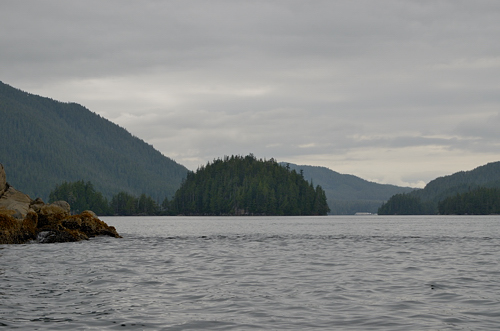 Looking back to Goose Bay. Duncanby Landing is hidden behind the islands left of center. 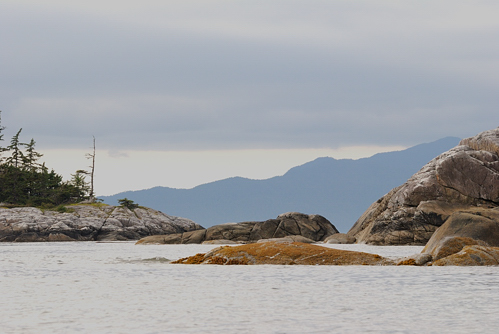 The rocky islands of Penrose Island Marine Park are a haven for seabirds. 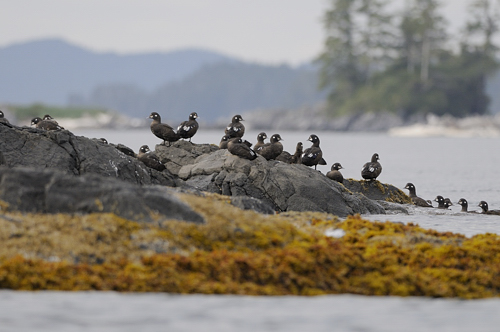 What kind of duck is this? 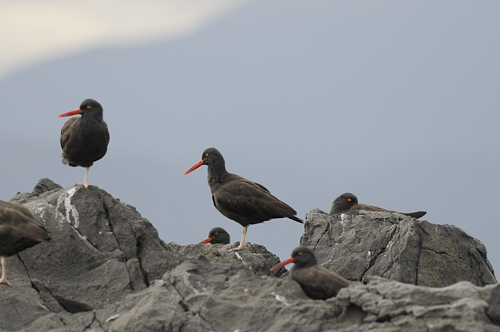 I came upon a colony of my buddies, the oystercatchers. 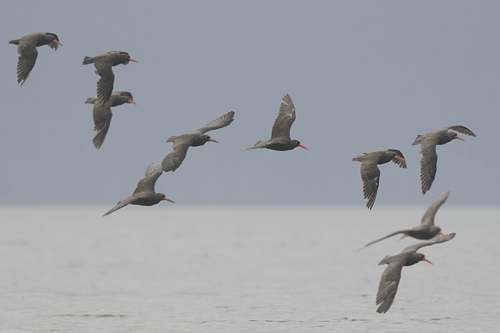 They decided to go for a spin around me. 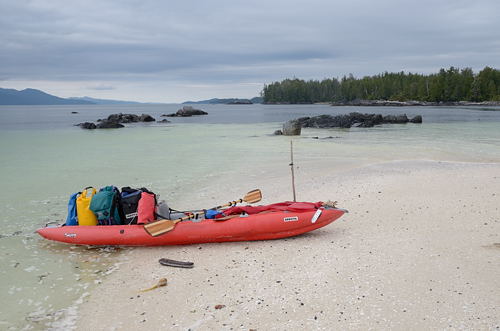 The Penrose Islands are nice and my destination was Fury Cove at the far north-west end, where you can see on Google Earth that there are some nice white sandy beaches. Indeed. 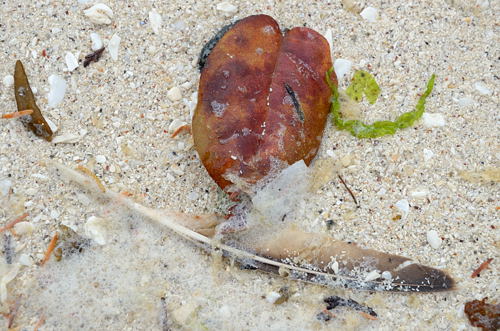 It’s so nice to be somewhere that has natural debris and foam on the tidelines, not garbage. 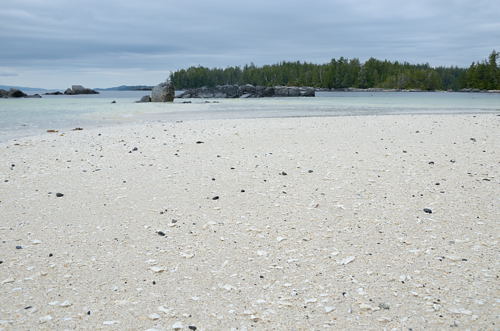 This is a stunning pure white crushed shell beach, reminiscent of a tropical coral reef. It goes all the way down to low tide and beyond. I am wondering how these beaches form, how so much crushed shell can accumulate in this spot. We don’t see these on the South Coast. It must be a midden beach, which is the “dump” site from First Nations clamming activities. There was likely a village here long ago. 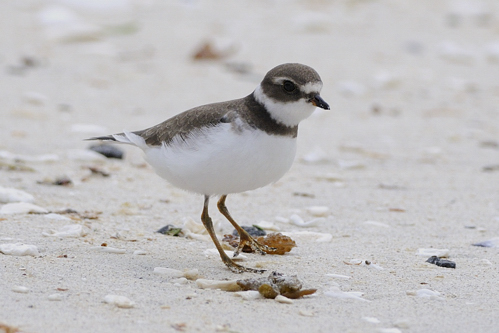 I don’t know what this is. A sandpiper of some sort? They should be breeding in the Arctic this time of year. There was a pair poking around the beach tideline. 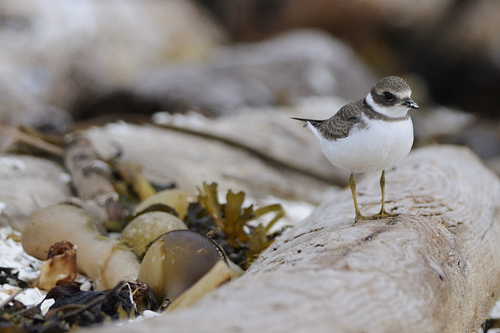 Its mate, on the other side of the beach. They called to each other and then they were off. 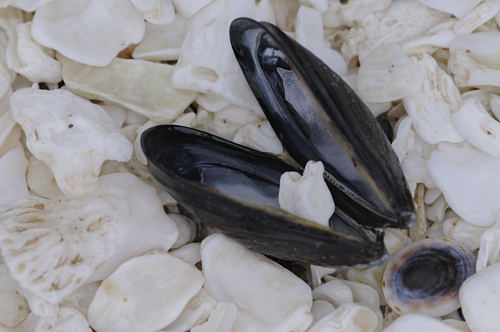 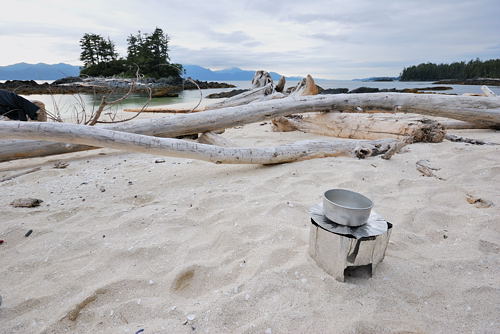 These crushed shell beaches are fantastic for camping because the sand is coarse enough that it doesn’t stick to everything and get everywhere. 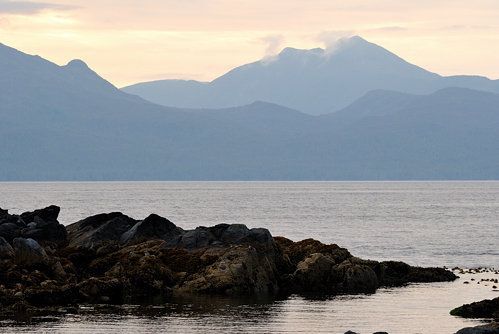 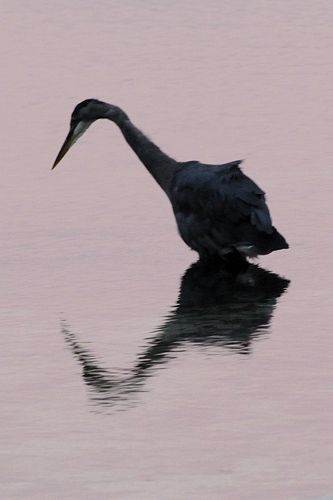 As the sun was setting and I was half asleep I looked out my tent to see this pterodactyl fishing in silhouette  of the sunset.

I took some videos too and I will upload them when I get it sorted out. Soon, hopefully. 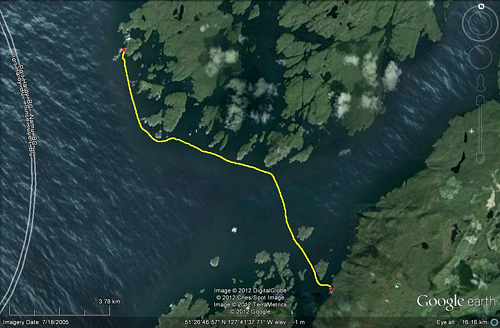 This entry was posted on September 24, 2012 by markbc. It was filed under Uncategorized .