July 12 – Heading Back Out Smith Inlet

The rain started at 6 in the morning -- right when I wanted to get up. I poked my head out and got this shot before retreating inside.

As usual, I sat in my tent, getting really bummed out, until it finally ended at 11. I packed up with everything mostly wet.

I was getting my boat loaded when a fairly large boat came by and then doubled back around after it passed me to check me out, probably just to make sure I was okay because I don’t think there are many kayakers up here. It was a nice gesture, but in doing all their twists and turns they sent some big wake my way which really caused havoc with my precariously placed half-loaded kayak. I then headed out.

Up close at that big slide

A zodiac zoomed by. I couldn't figure out where they came from since it is a long ways to anywhere up here. Your closest neighbours are 20 km away at least.

Looking back to where I came from

The weather was fairly calm for the most part. I played with my underwater video camera as I went. The water was brown from all the river runoff. The vegetation here never really dries out so decomposition is incomplete, and lots of tannins are produced which make the runoff water look like tea. The intertidal life isn’t too diverse up here because the salinity can get low when it rains hard. But mussels, barnacles, and rockweed all flourish. There were also tons of giant sunstars along the steep rocky subtidal slopes here up the inlet. These are the monsters of the sea and they can get over a meter across. They are the fastest starfish in the world. Most of their prey around here deploy unique escape mechanisms when they smell an approaching sea star. Clams stick out their feet and try to walk away, and if they’re lucky they’ll go in the right direction. California sea cucumbers start doing the wave and try to squirm away. Swimming scallops do what their name suggests — they swim away, just like in the cartoons. Sea urchins lay down their spines flat, exposing thousands of little pinchers called pedicellaria, with which they pinch the sensitive tube feet of the star.

After a while a headwind started picking up as usual in the afternoon when it isn’t raining. I tied off to an overhanging cedar and had a 45 minute break for lunch — Clif bar, dates, and peanut butter — what else. I battled the winds for a few more hours and made it as far as I thought would be practical — no point wasting energy fighting the wind when in the morning it would likely be calm. There was a little peninsula sticking out that became an island at high tide and it looked ideal to camp on. It was bare rock up top.

I landed on the thickly mussel-infested protected beach in the leeward bay behind the peninsula, but as I pulled one of the bags off my kayak the force of this pushed it up against some mussels and gave it a big gash. Not deep enough to cause a leak, but it would need attention. 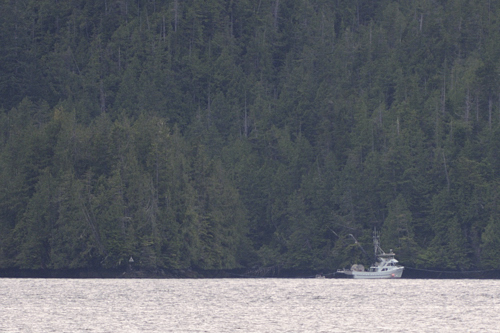 The poachers, this time with a different boat, were still at it a few kilometers away across the channel. 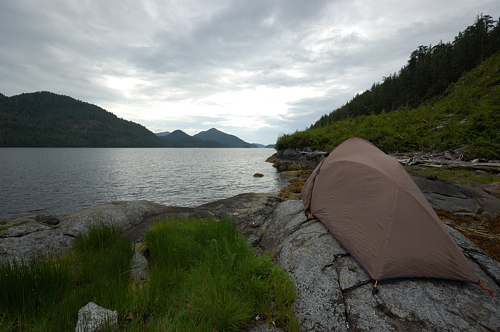 What a great view I had out towards the opening of the inlet.

I had zucchini lasagna for dinner and took advantage of the relative dry to put some Aquaseal on the gash. I would only need a few hours of dry for it to set.

At midnight, under a full moon, the tide came way up, floating my boat which of course was tied off since I take no chances, this time to a big rusty shackle lying around. All that stuff in the middle would be covered with water if I didn't move it. It came to within about 8 inches of my tent. Not only that, but I also had the low drone of the poachers going all night to keep me awake, which wouldn't normally bother me, but these guys did.

This entry was posted on August 6, 2011 by markbc. It was filed under Uncategorized .