The breeze died down overnight and it was dry and calm in the a.m. I awoke really early to noisy birds and a seal fishing beside my tent, which sounded like it was within 10 feet. Geez, how can a guy get some sleep around here? Have some respect, guys… And I soon put two and two together to figure out that this is how the perch ended up on the dock — the seal chased it there and it jumped out. 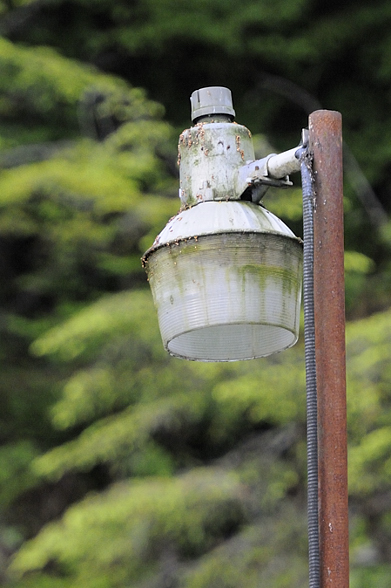 They were nice enough to leave me a lamp post.

Looking south-east down the blind arm of the channel that goes no further than you can see.

Looking north-east up the main part of Smith Inlet that goes for another 6 km to the head where the Nekite River enters in a big estuary, populated by grizzly bears at certain times of the year.

Looking west back out Smith Inlet

I rounded the corner after crossing the inlet and this merganser family did not like me there one bit. They scurried away with a lot of noise and ended up across the channel before they settled down. Sorry, guys.

There is another parallel arm to Smith Inlet which goes all the way back to this point, just behind that hill, starting from around the entrance of Wyclese Lagoon, on the other side of the inlet. 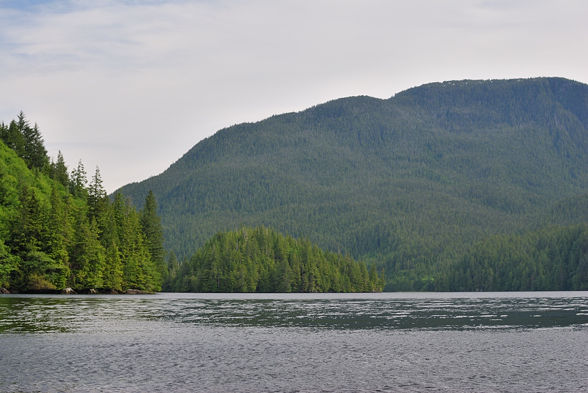 Looking towards Jap Island, in the middle of the estuary.

Finally I arrived at the lodge and had to round a log boom to get to the building. There was a dead baby seal draped over the very end of the boom.

I was a day early unfortunately, and they were all booked up, and would be for a few more days. But the new guests weren’t arriving until mid afternoon so they invited me on a 1.5 hour bus tour up the road to the river blind to see what was there. The problem was there aren’t many bears around at this time of year. In the spring they come down to the estuary to graze on plants, and in the fall they come down to the river to catch returning salmon (there are no sockeye in this river because there is no lake, and therefore nothing running at the moment). But in the summer, the bears mostly disperse up into the higher elevations.

There are always swallows at these remote settlements along the coast. 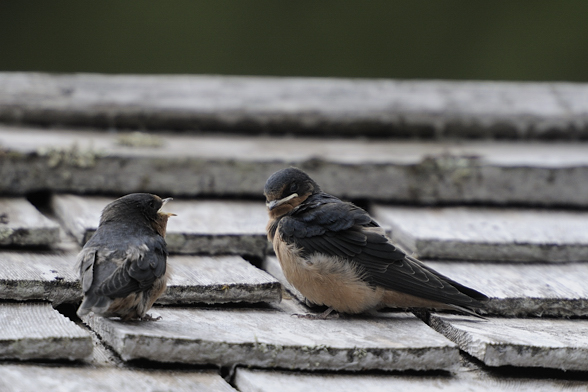 There was a younger Swiss couple here on honeymoon, and an older Australian couple that had just flown in the day before on that plane. He did see me, but didn’t take a photo. They had been all over the world touring big game parks, and he had lots of stories from Africa to tell. He had a big wildlife lens too, a Canon, which seemed much lighter than my Nikon setup. 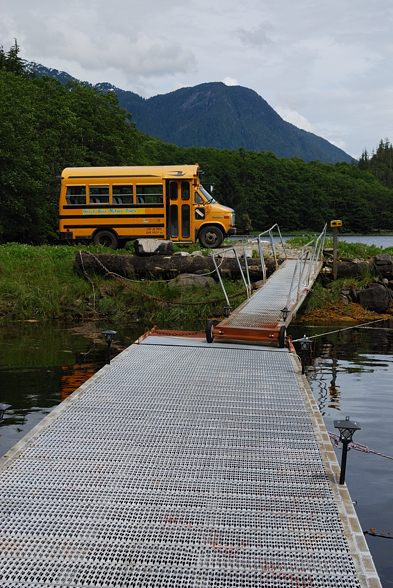 We all piled into the special little bus for our tour.

We drove up a few kilometers to a bear highway. The guides have hiked several kilometers up this trail, which the bears use to move around the valley. 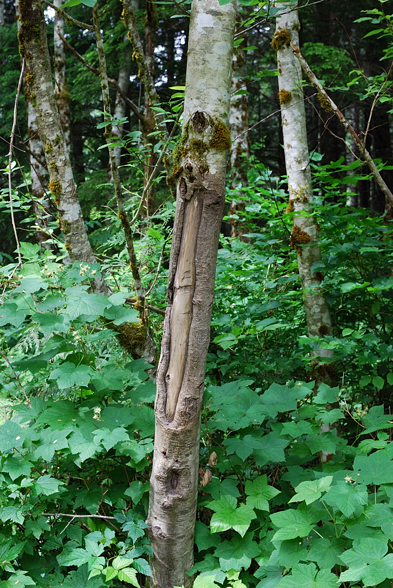 At the head of this trail is a rub tree.

Looking across the Nekite from the blind. When the salmon run this area is packed with bears and they sometimes come in the blind.

A bear wallow where they like to roll in the mud, in a quiet backwater of the river. They like to eat the stems of skunk cabbage in these muddy habitats.

We saw no bears on my tour but that was okay. I filled up my water bottles, got packed up and then the new people came in on their plane. I said goodbye and headed back out. I immediately got hit by a squall with hard rain but I kept to the shoreline and I was fine. The plane seemed to come check me out after it took off, then circled back around. At the time I thought they were worried about me in the squall, but afterwards I realized they were just gaining altitude to get over the mountains.

The weather closing in 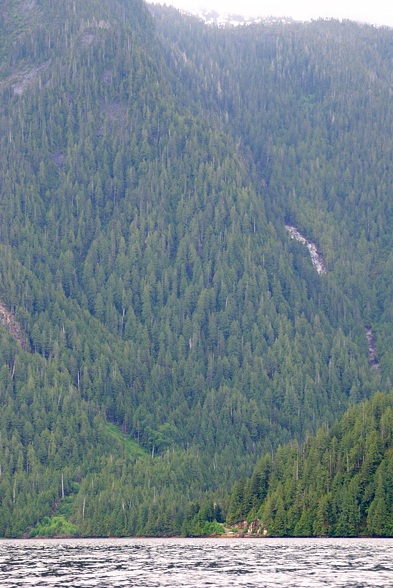 Just for a sense of scale … looking across the inlet to my previous night’s campsite at the logging camp.

I moved my way westward along the shoreline looking for a place to camp and eventually found a suitable spot not too far from where the straight shot out Smith Inlet begins, which I did not want to go past since it would be hard to find a campsite. The rain stopped when I pulled out. 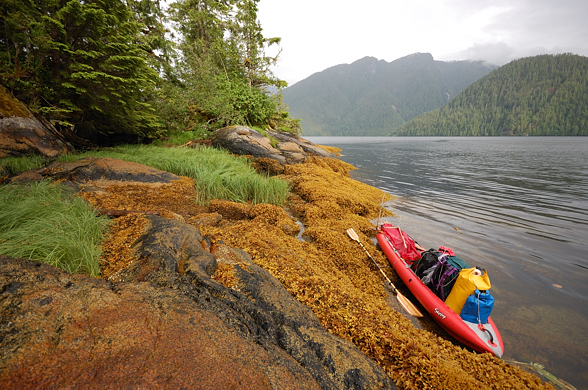 The pull-out wasn’t too bad, just lots of slippery rockweed. I camped on the top of that rock center left. 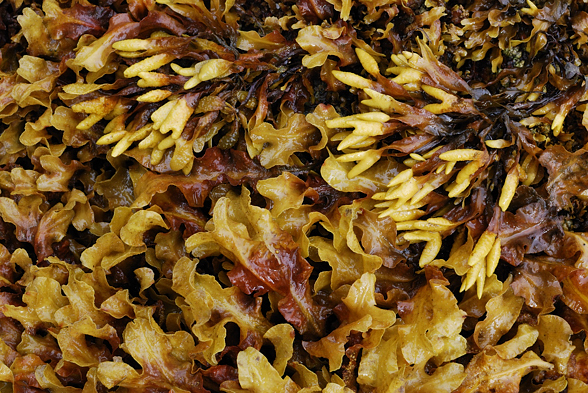 The rockweed really goes nuts in this low salinity brackish water. There seems to be two species here, which you can see in this shot. I will ID them later. 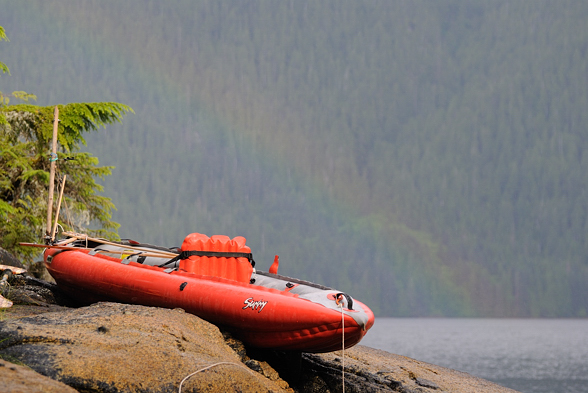 A nice way to end the day!

This entry was posted on August 3, 2011 by markbc. It was filed under Uncategorized .