They were up at 6 a.m. to go count fish. You have to go out there fairly frequently because the fish get concentrated below the fence. Every few hours they have to open it up and then watch from above to count the fish that go through.

The fuel storage shed, along with my deflated boat in that messy heap. 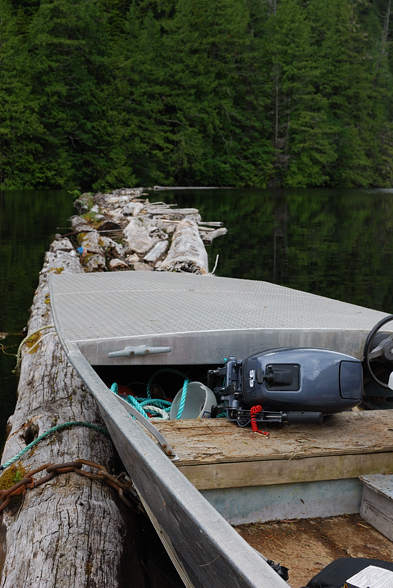 Today we were going to go down to the end of the lake in this speedboat to get sacks of rocks. The rocks are needed to plug up holes in the fence through which the sockeye were sneaking. The only place where you can reliably get enough rocks to fill the burlap sacks, at least during this high water, is at an avalanche chute way down at the other end of the lake. Sounds pretty interesting to me, I’ll go! 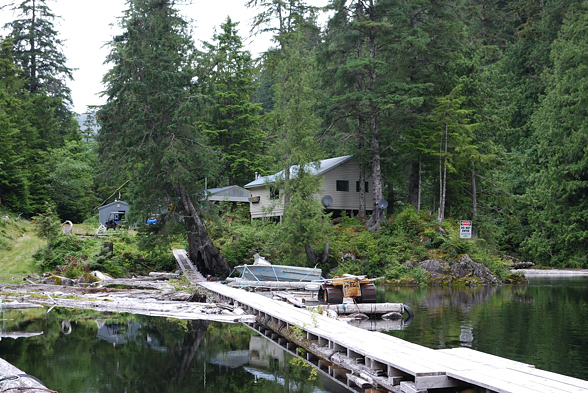 Be careful not to get sucked down the black hole on the right!

The logs accumulate at this end of the lake and every once in a while they will open up the fence and send them all down into the lagoon. 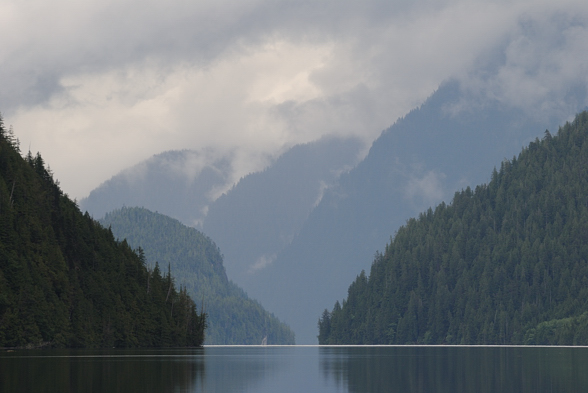 Looking east down the lake from the camp dock. 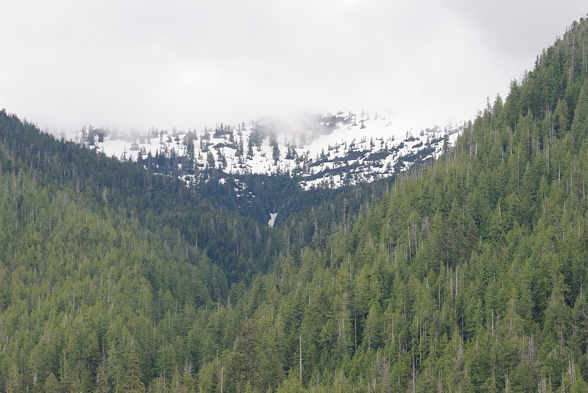 There was still lots of snow in the mountains, unusual for this late in the season. 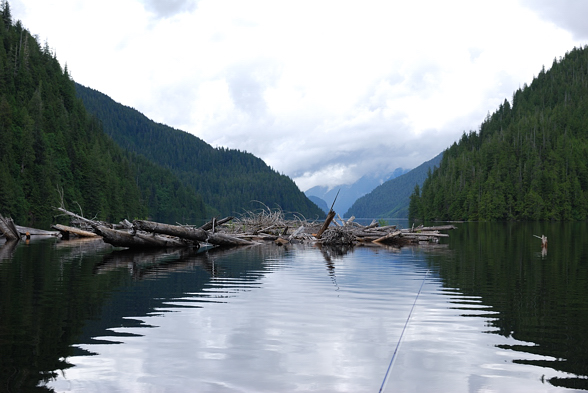 A little ways down is a narrows where logs tend to collect so we had to be careful at this point.

This is actually the other side of the pass which I attempted to bushwhack the previous year. On the far upper right is the pass. I would have had to come down that steep hill, which looks like it is possible, though certainly not easy.

The entrance of the creek draining Triangle Lake, which is a little lake right adjacent to Long Lake.

Fishing is usually good here, and Etienne caught a cutthroat on his first cast. I got UW video of it. But after that, nothing. We presumed the water was just too cold. And it was also very high water; there are usually beaches around here but at this time. 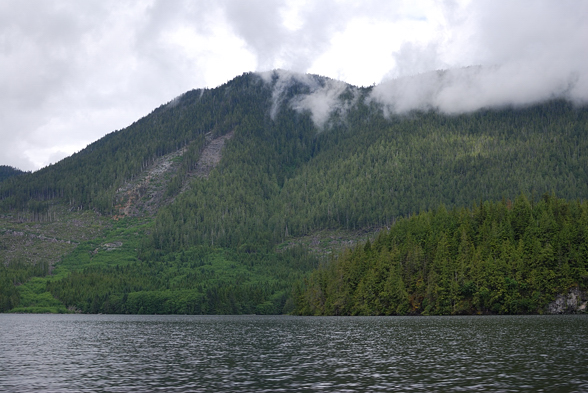 The old cutblocks above Triangle lake, which is just behind that hill on the right. The road goes through these and would take me to the right and then northwards to Smith Inlet.

I would have to bushwhack up to the road, about 300 meters or so, through fairly thick bush. 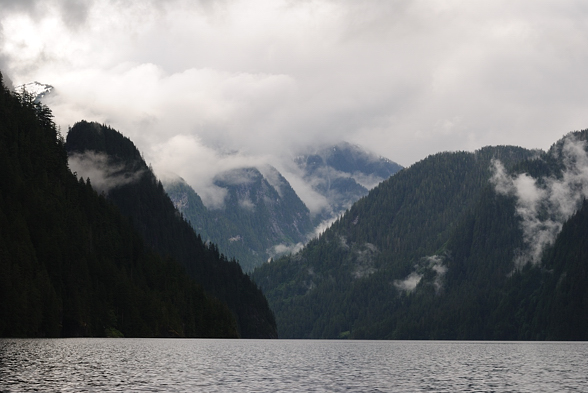 The topography got more dramatic as we headed east down the lake. 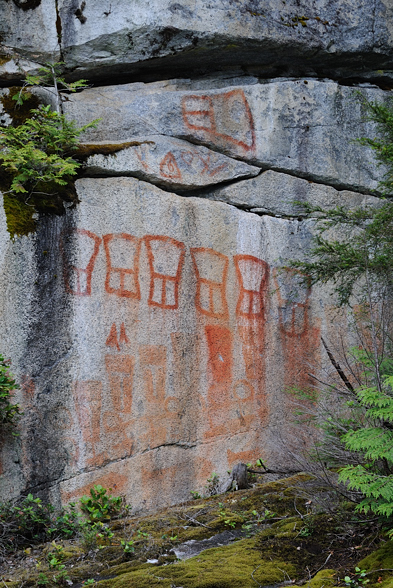 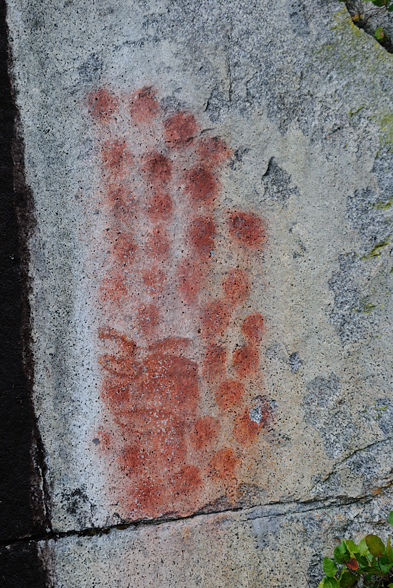 I think those represent fish eggs. 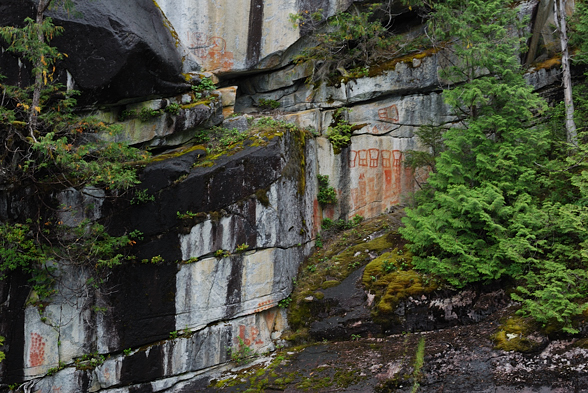 The middle third of a very large waterfall entering the lake.

The lower third of the waterfall. In summer it is a nice swimming spot, but not today. It can actually get quite warm in the lake’s valley, being somewhat inland, and with steep rock walls absorbing the sun’s heat. There are quite a few douglas firs in this area, which need some warm and dry weather in the summer to thrive. So here, inland a bit, we are getting away from the hypermaritime coastal forests and beginning the transition through the coast mountains ecozone.

The south side of the end of the lake is where Canoe Creek enters. We tried casting but got nothing.

Looking northwards across the lake to the main valley where Smokehouse Creek enters. It comes from the right. This whole area, including the entire Smokehouse watershed, is now in a conservancy. 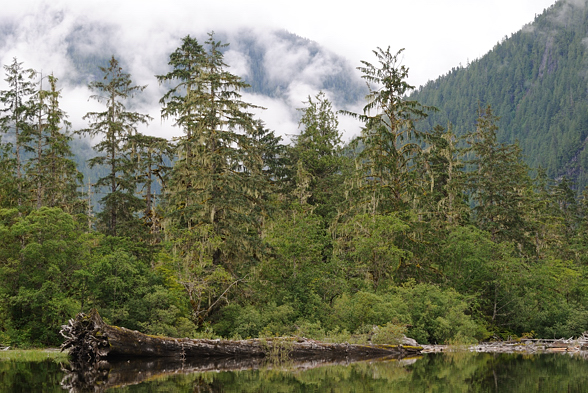 Up near the Smokehouse estuary. This area is usually a big beach but now it is totally inundated. 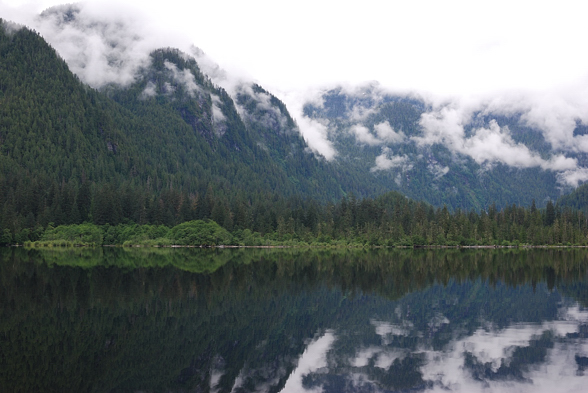 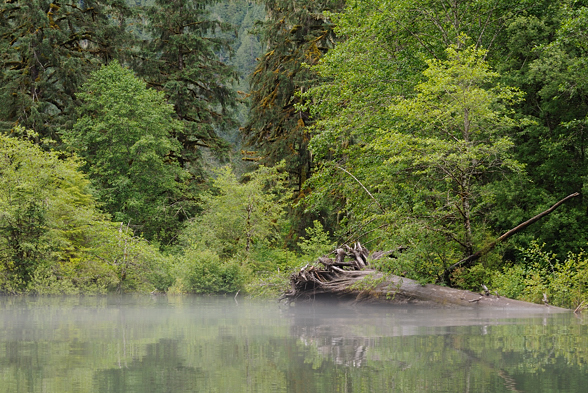 Heading up the river, we encountered eerie mist.

It is a sluggish river with a silt load from the glaciers in the headwaters. 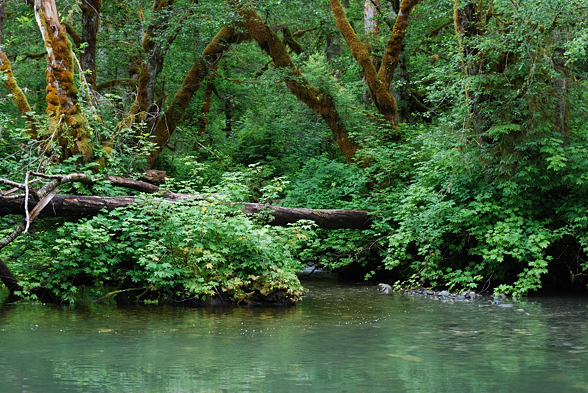 You can see the meeting of the silty river water with the clear water of the stream. 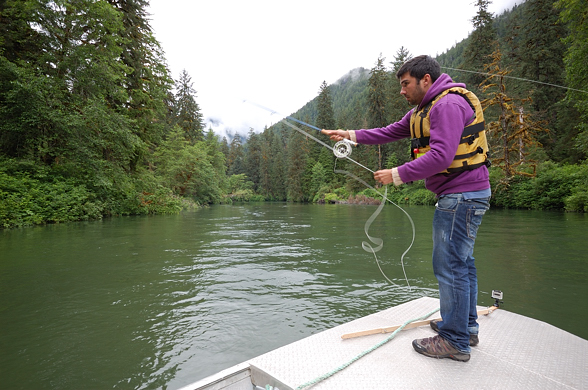 We caught nothing; the water was just too cold.

The river is lined with old growth giant sitka spruce forests. We went up about three kilometers, then decided to turn back. 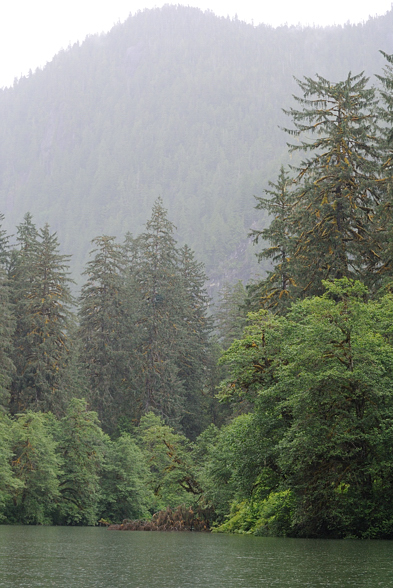 Then it started to rain.

Stopping at the avalanche chute a couple kilometers down the lake.

The rock bags were ready to go; we just had to move them onto the boat. That was my chore in exchange for getting the tour of the lake. We passed them along like a chain and loaded them up in good time. 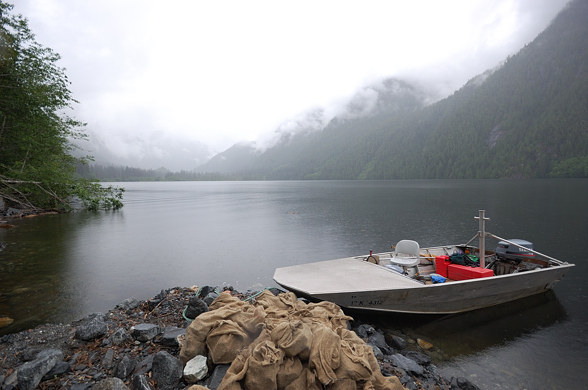 The weight was a little lopsided on the way back.

Evening light, looking down the lake from the camp. 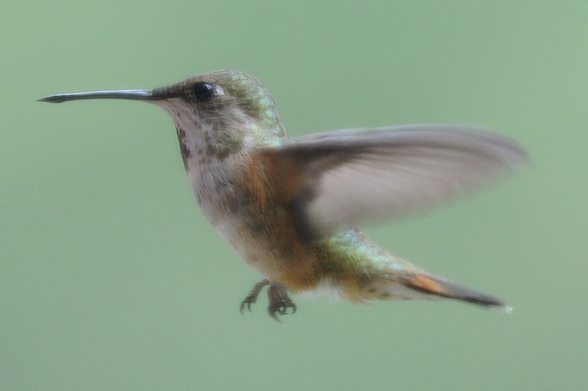 There was a hummingbird feeder outside the kitchen window, and there were usually about four of them buzzing around at any given time. I decided to get some shots but the window screen was taped on and I didn’t want to remove it. So I had to shoot through it. And the autofocus didn’t work because of that. All things considered, not a bad shot!

The seals chase the salmon up against the fence, where they sometimes get pinned due to the water flow. Then the seals pick them off. The fish eventually die there so they are collected and sent back to the local native band for traditional uses.

More salmon than we could eat. In this day and age, an increasingly rare occurrence.

Looking down at salmon swimming through the open gate. The walkway down below is a very dangerous place to be because if you fall in you will get pinned up against the fence and end up dead like a salmon, so people have to be latched onto a harness and guyline to prevent such a similar fate.

There were some poachers at the mouth of Wyclese Lagoon taking the sockeye.  So the DFO guys made a trip out on the 6 p.m. tide to go talk to them and get their info. They would pass along the info, but they had no authority to arrest them.

Ahh … resource wars. This run is pretty big, especially this year. They estimated at least 100,000 fish. If their counts verify this then it will probably be attracting more attention from DFO as a real fishery. Because you know, in this day and age of resource scarcity, you can’t have any excess fish anywhere that aren’t caught… all excess must be directed to the giant human mouth… to consumers half a world away who believe that sockeye salmon come from a can. But apparently we’re not facing a Malthusian collapse, there are lots of resources for everyone…

I had been talking to the guys earlier about living out here all summer. They are out for two months at a time, with a short break until they return again. They said it’s nice but it can get a little uneventful out here for so long. The other end of the lake is where all the action is. I wondered how I’d handle it. I think I could handle it okay because I find the littlest things in nature interesting. Nothing ever happens in cities in my opinion. Riots after the Stanley Cup finals? Whatever. Salmon running up a river with grizzly bears? Yeah, that’s exciting. The only thing I don’t like about being in the wilderness is the of lack of internet; I have to keep in touch with what’s going on in the rest of the world. But they have satellite internet here so I think I could easily spend a whole summer up here.

I thought about how unique it must be in the world to have your very own wilderness lake right at your doorstep. It’s only at about 4 meters elevation, and it’s 25 km long. How many other places have that? Maybe way up north or on top of a mountain somewhere, but a low elevation wilderness lake like this in highly productive ecosystems? Pretty rare. This is another special place on our coast. 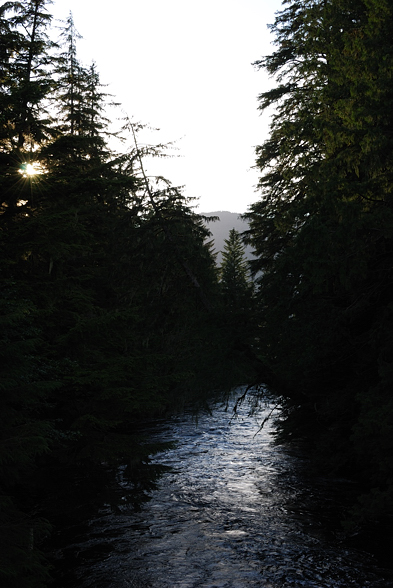 Looking downriver from the fence towards Wyclese Lagoon

I made Himalayan lentils and rice and had a relatively early night.

This entry was posted on July 31, 2011 by markbc. It was filed under Uncategorized .