It was a chilly night, because it was clear!

It was a beautiful morning and I lolled around for a few hours on the dock in the partial sun, charging my batteries, organizing stuff and drying out all the food in my waterproof food bags. The bags not only keep the moisture out, but they also keep it in if it does somehow enter, for example hypothetically if you’re on a kayak trip in the rainforest and over days of non-stop rain you have to open them up several times to get food out… I had to keep the food dry or it could go bad.

A salmon bag that was lying around. Perfect for my tripod! I’ll take it, thanks! 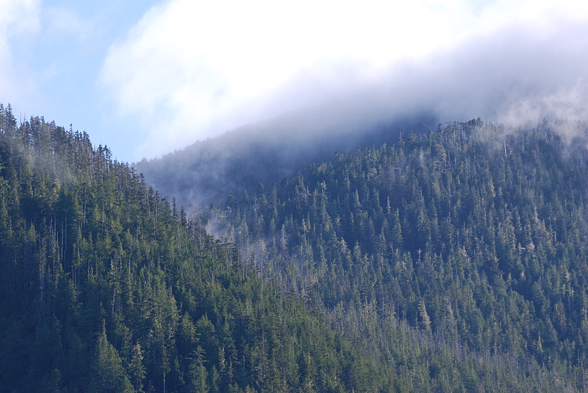 I spent a couple hours working on making a mount for my underwater GoPro housing to hang off the front of the boat and record underwater footage as I paddle. The issue was that there was no way I was going to go up to the front of the boat to secure it every time I wanted to use the UW camera. So it would have to be at the end of a long stick that I would put in place between two brackets at the front of the boat, and then wedge it in further back towards me so that it is held sturdily. I got that finished and I was getting ready to get on the water to try it out…

But at that moment I heard a quad coming down the road. It was John and Patti, two natives who worked for the Department of Fisheries and Oceans up at the fish camp at the lake. They said I could stay up at the camp! 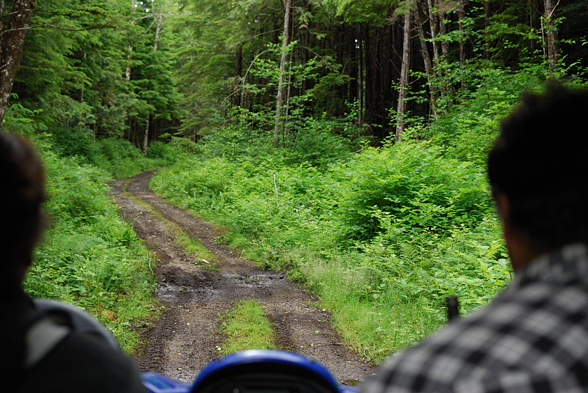 Then they drove me and my stuff up to the camp.

Seeing Long Lake for the first time — behind some smoking sockeye salmon.

This camp has been here a long time, originally built by loggers who worked some of the shores of Long Lake (you can see above how the forest down near the opposite shore is younger than the old growth further up the hill). There is a large sockeye run that comes up the river into the lake in the early summer and the camp operates a fish fence which allows the fish to be counted. The adults hang out in the lake until the end of the summer and then go up the rivers at the other end to spawn in the fall. That is where the bears and wolves catch them. Sockeye fry require a lake in which to mature for a year before heading out to the ocean, after which they return about four years later as adults to complete the cycle of life. So only river systems with lakes support sockeye.

There was another DFO boat coming in on the 6 pm tide (you have to wait until the tide is high to get through the narrows into Wyclese Lagoon). I also realized that I could possibly do the other portage I was thinking about — from half way down Long Lake there is an old forestry road that goes 7 km north up to Smith Inlet. At this point I was really kicking myself for leaving my wheels at the other end of the lagoon. So I decided to hoof it back to get them before the end of the day.

The boat was pretty light but it seemed to take forever to get back there. I was worried about a bear eating the tires since they really stunk of rubber, and apparently bears like to eat rubber. That would be a bummer. But that’s the thing about kayaking, you have to be patient. The boat only goes a certain speed and you can’t go faster than that. You have to be out there for the present, not the future, or you will go crazy. It took two hours, from 2:30 to 4:30. I also had a headwind, but I wasn’t cursing that because if it kept up it meant I would have a tailwind for coming back, which was more important.

I finally got to the end and no bears had come by. But unfortunately one of the wheels was flat! I hadn’t planned on that and my boat inflator pumps wouldn’t work on the bicycle valve. I’m lucky it didn’t go flat on the portage. Oh well, I would see if I could fix it at the fish camp, since they had a compressor, and ironically, the exact same box dolly with tires that weren’t flat!

I had a nice tailwind on the way back and I played a bit with my new underwater housing mount as I went along the shore of the lagoon. I also saw the DFO boat race across right on time.

When I got back at 6:30 I started walking up the road and I heard banging coming down towards me. Then two guys in the quad came around the corner holding a shotgun… apparently it’s DFO policy that you always carry a shotgun in bear country. They were Wayne, the boss, and Etienne, another exchange student, this time from Paris, France, on a summer program working in the hatcheries at Bella Coola.

They graciously invited me to stay at the camp even though I don’t think it was officially allowed. I set my tent up in the storage room. Then they fed me sockeye and rice and salad, gave me beer, I got on the satellite internet, and had power to charge all my batteries! Wow! I think they were a little taken aback by my presence, this guy just showing up out of the wilderness, although they have had kayakers visit before, very infrequently. Imagine if I had made it across the bushwhack to Long Lake and shown up from the LAKE side! That would have really freaked them out!

I was in bed by midnight and then they turned the generator off.

This entry was posted on July 30, 2011 by markbc. It was filed under Uncategorized .