I didn’t sleep well last night with all the waves and presumably a cougar walking around. Once the light returned I felt safer though and got some more zzzz’s. The tide was down at this point which also helped.

Around 9 a.m. I heard some logs being thrown around the beach in the next cove over where the creek was. I assumed it was a bear.

I was feeling quite frightened with all this animal activity around me. Wolves, I’d like to hang around with. Black bears aren’t too much of a worry. Grizzlies are a cause for concern. But cougars normally take off. When they hang around humans that is a bit frightening. If you are with a few people you can watch out for each other. But while alone you can’t. You are vulnerable when you crouch down because you appear small. You need to stand tall and act aggressively. At least I was safe in my tent but I couldn’t stay there all day. I went for a stroll up the trail from the campsite into the forest, which was pretty but there was bear scat everywhere. I returned and started a fire on the beach to make me feel better. I made it in the lee created by a couple of big logs. But then they caught fire after a while and I had to bucket up sea water to put it out.

I also attended to some more chores today. I sewed up my frayed sleeping bag using dental floss. That is the best thing to use when you are camping. It is very strong and you use it for your teeth anyways.

I also wanted another water bottle and just as requested, the high tide left a 1 gallon water jug on the beach for me. I tasted the water inside and it was a little salty so I dumped it out.

I also found a piece of half inch plastic pipe half buried in the sand. I cut this to length and heated it up in the fire. Then I bent it into the shape of my head and attached my headlamp to it. Now I had a head brace for my video camera! It was still a little shaky but better than before.

Also, the previous people had left a jackknife on a log after slicing up an apple (they left the little plastic sticker which I burned). This was a nice knife and I’ll have a use for that I’m sure. Also nearby was a model 4X4 in the sand which I pulled out. This place is full of surprises! I got all the provisions I needed! 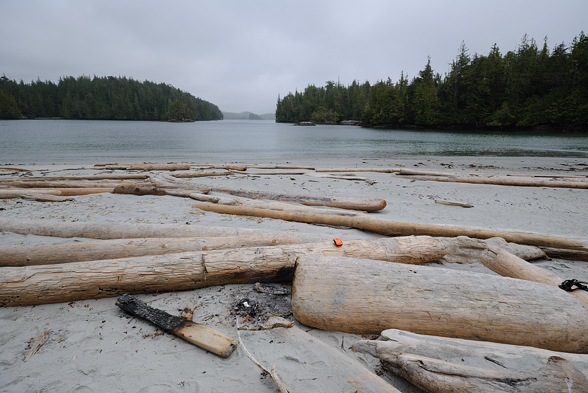 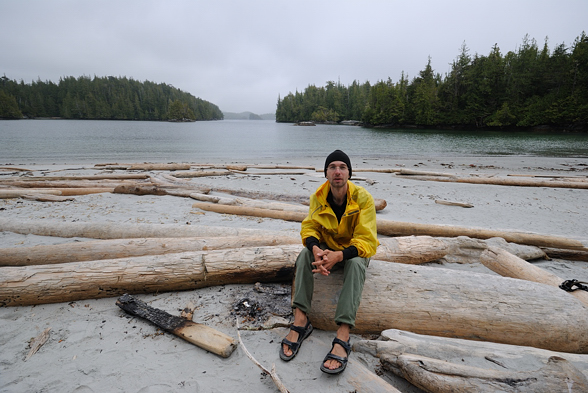 I made a trip to the creek and I had to hike up through downed logs about 15 meters to a point where it was dripping off some rocks. There was just a little trickle. I had to wait several minutes for all my containers to fill up and I felt vulnerable because I was crouched in a ravine. I had my bear spray ready.

Also on this little water trip I saw the log that got thrown around before. It wasn’t too big but I could see the claw marks in the sand. For some reason I assumed it was a bear but now thinking back, obviously it was a cougar sharpening his claws on the log just like our cats do. The paw prints weren’t very large and the ones that were from swiping had big claw marks. 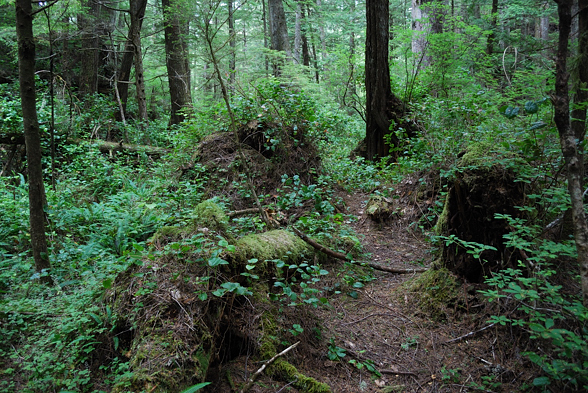 This entry was posted on September 20, 2010 by markbc. It was filed under Uncategorized .