I quickly packed up in the morning and started hiking my stuff down to the sandy flats way out at the head of the cove.

There was a six inch deep pool separated from the open water by a sandbar. I set up my kayak there and then had to drag it 30 meters through shallow water with the skeg dragging to where it was deep enough to get in.

I had to fight a few breaking waves on the way out but it wasn’t too bad. I got out and was again on my way. The sky was gloomy and the winds were light.

I went along the coastline for a while without much happening. It was just steady paddling. It’s good that I decided to call it quits at my last campsite because there weren’t any suitable locations further up along this coastline. I could see the beginnings of Blunden Harbour which was to be my destination for the day. 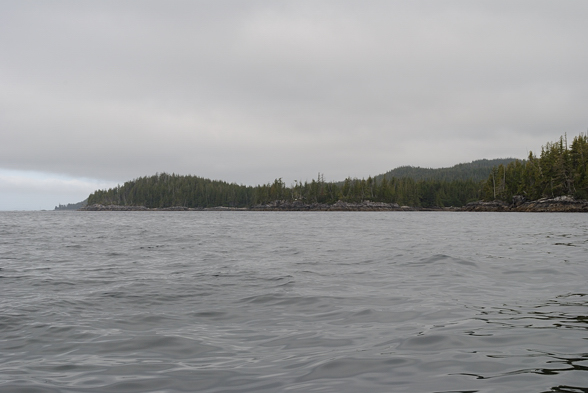 As I was approaching the first island which would provide some shelter, there was a sailboat coming my way. I thought I might talk to them, but then I noticed something large and black on the rocky beach – it was a bear!

I immediately headed over and got out my camera. By the time I got to it, it was in a different spot, right by the water, flipping up hundred pound rocks as if they were nothing, and eating the shore crabs underneath. I took several photographs and the sailboat came over too. I decided to see how close I could get and when I got about 30 feet away he decided he’d had enough and turned away. Then I backed off and continued on my way. 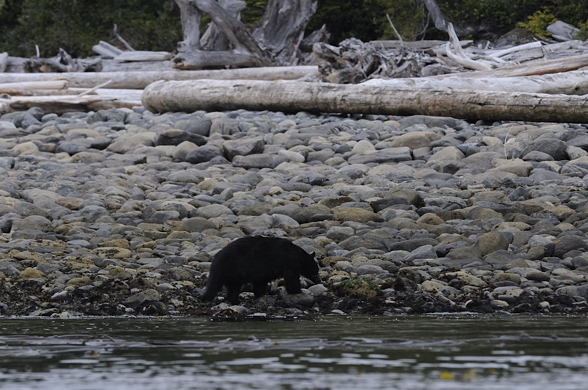 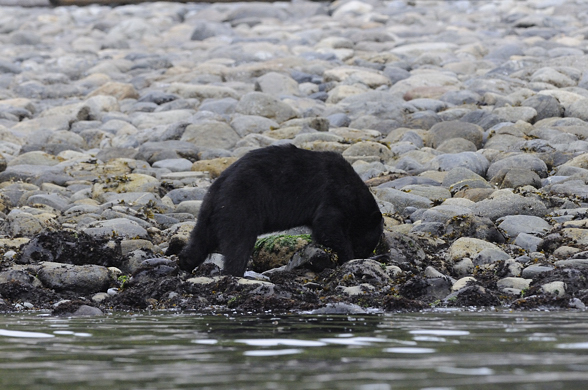 The winds were starting to pick up now and I headed to the little island across the bay which would provide some shelter. Along the way I saw another kayaker coming my way. We waved and I headed over. He was in an inflatable kayak! We rafted together to talk a bit. His name was Mikhail and he had just paddled across from Port Hardy. He’d had a difficult time in the winds in his inflatable kayak. He had just spent the night on a grassy patch in Blunden Harbour and was heading down the coast to finish his trip in Telegraph Cove. He said there were a lot of bear signs around his campsite and he did not sleep well! 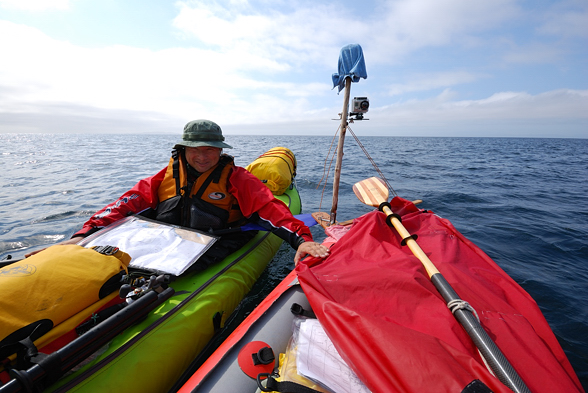 Where you are looking is where he came from yesterday

By the time we separated we had drifted a ways back and I had to fight really hard to get to the island I was originally heading for. I made it and did not see any obvious nice campsite except a rocky beach on the south west lee side. I went up through the kelp beds to the northern end and tried to cross over to the next island but it was almost impossible in this wind. It would have taken me a half hour of full out exertion to just go a half kilometer.

So I went back to the first rocky beach I saw and checked it out. It was actually a half decent spot. The rocks were large and smooth, since this spot obviously gets pounded during south-easterlies. They also had few barnacles on them so I waited around in the kelp for a half hour until the tide rose above the few barnacles there were. I then landed and got on shore without too much difficulty. I knew I was going to have problems in the morning though because the tide would be out and I could see that the rocks extended way down and they were covered with slippery intertidal life. But I had no choice.

I was in the lee where I was standing. Around that log sticking in the air, the wind was howling.

It was still fairly early, not much after lunch time, so I would have lots of time today to relax a bit. This was also a nice spot because I assumed there would be no bears on this small island. However, as suspected, there were no suitable tent sites because the whole beach was either large cobble or logs. Right above the logs was thick salal bush. So I figured I’d have to make my own tent site. 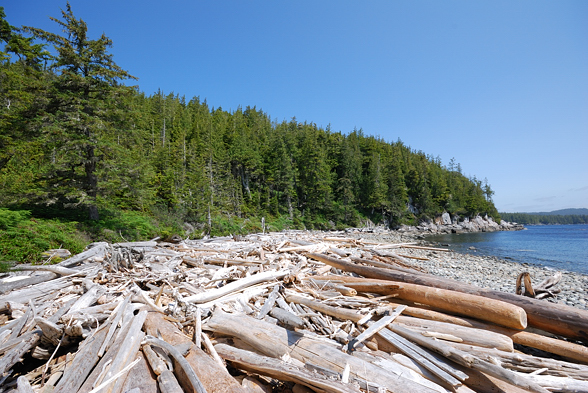 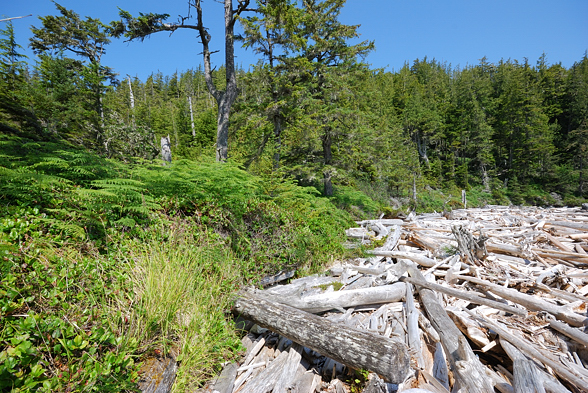 Thankfully, I soon found a piece of plywood washed up, which would be perfect!

I set it up at the very western edge of the beach, which happened to be the calmest. But only 20 feet away the wind was howling. It was blowing down the west wide of the island which is exposed to the open water. But the trees shelter this one little spot.

As the tide came in it also created a nice bathtub against the bedrock at the edge of the beach. I love this spot! 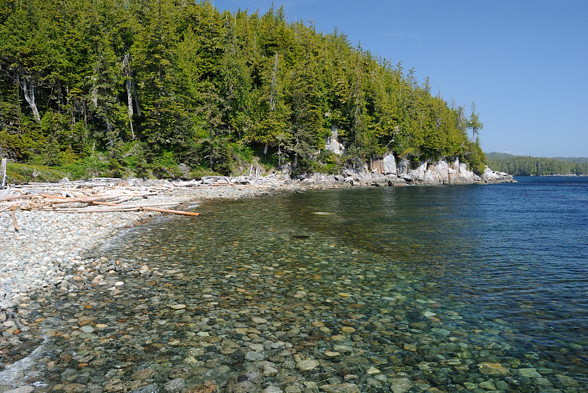 Plus, there was a hummingbird that kept buzzing me. I hoped to get a photo but I didn’t manage to succeed.  I also found a washed up old fishing lure container. These were home-made flies, and most were too far gone but a few were usable. 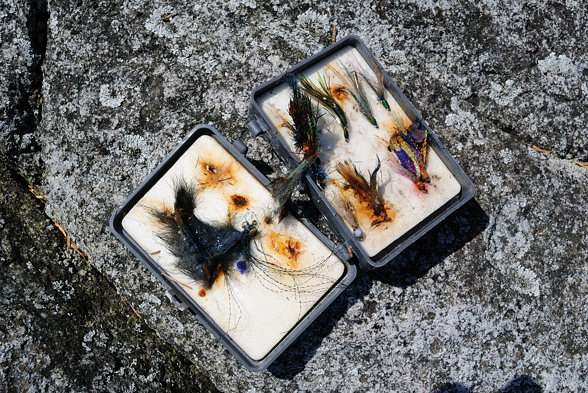 I had a nice snooze for an hour. I also charged more of my batteries but to charge my GoPro batteries you have to plug the power straight into the camera; there is no external battery charger. This probably works fine on a desk, but out here it is a pain. Of course I caught the cord while walking around and pulled the camera across the rocks. This scratched the lens! I was not happy, but the damage seemed to be minimal.

I also tried fishing off the steep rocks on the western side, only 30 feet from my tent. I got a few casts in but then my lure got stuck in the barnacles under the rock. I just left it there and planned to return later when the tide was out to see if I could loosen it. Sometimes I get really frustrated with fishing.

I again mustered the courage to try to fix my water filter. The glue I used was indeed strong so the only way I could re-separate the two pieces would be to cut them. So I got out my file on my Leatherman and started cutting around the shaft where it attaches to the handle bracket.

Once done I was ready to go. I again set up on a big log. I glued it back together and held it for a few seconds. Then I realized that I hadn’t put it through the red piece! Duh! I quickly pulled it apart and then shoved it through, covered in glue. In doing so the sharp edge cut off a bit of the gasket lining the hole.

You might also notice that there is a spring and ball inside that shaft. This is the pressure relief valve which is needed to maintain pressure; otherwise it won’t pump. When I cut the shaft this spring sprung out and the ball fell out. I was on a log above big round rocks. Of course the ball went down into the rocks. I carefully removed rocks one by one until I found the ball. I then added more glue and managed to hold everything together against the spring tension until it set. Finally, it was fixed. But what a gong show. I think I am getting more absent minded and short as I age.  When I was younger I used to do a lot of work on my bikes, including bearing maintenance. I had little ball bearings around all over the place and I managed to manage it all. This repair job should have been a 5 minute piece of cake, all I had to do was do a dry run and keep everything organized in a safe place, then glue it all together. The filter would have been as good as new, with all the strong glue literally melting and fusing the acrylic back together. But because I have become more impatient and disorganized, I just jumped into it without rehearsing exactly what I needed to do, and on top of that I was playing around with tiny little parts on a log on a rocky beach! Why didn’t I do this in my tent? And in the end the filter now squirts water when I pump it because I damaged the gasket.

So I think I need to pay more attention to these little things and not let myself get too old and absent minded. It is amazing I haven’t ruined a camera yet, with four of them sitting in my lap. So I guess I’m not too absent minded. I guess these kinds of experiences make certain things more obvious, when such critical outcomes can depend on doing things properly, and when you don’t get a second chance if you screw up. Luckily my water filter now worked again. I am going to filter all my water now. The only exception is groundwater seepage, and I won’t be seeing any of that in this dry weather. 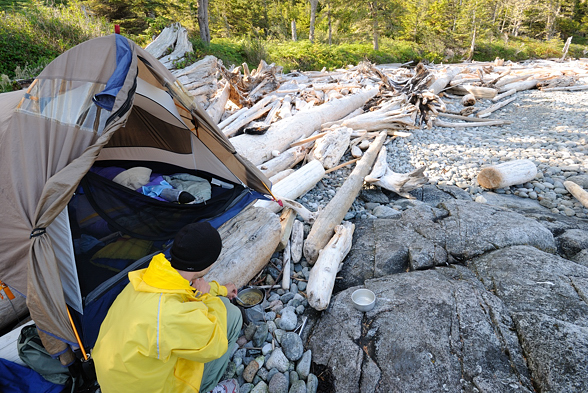 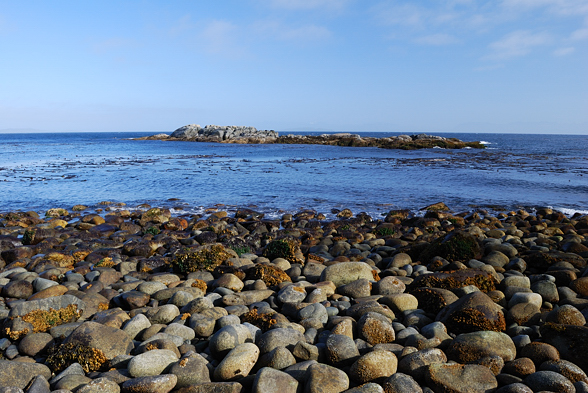 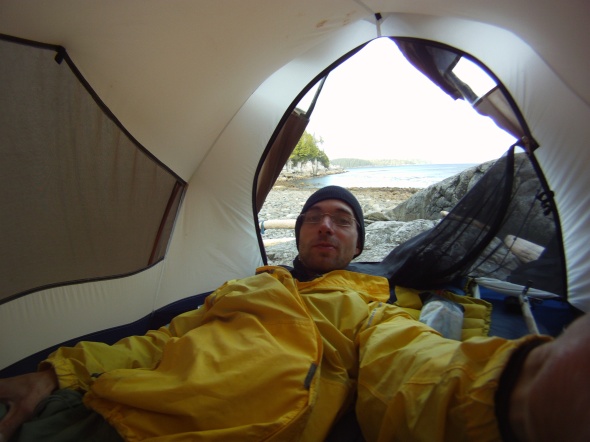 I also retrieved my fishing lure after the tide went out by using a long stick to push the line away from the rock which loosened the lure.

That’s a long piece of driftwood

I bet that rock has a few stories to tell

This entry was posted on September 20, 2010 by markbc. It was filed under Uncategorized .