I got up early the next morning to dead calm water and winds. I tried paddling without the skeg on the boat to see if it would work but no, it was almost uncontrollable. So I had to immediately come back to shore, unload, put the skeg back on, and load up again. Not a big deal, and I was still on the water by about 8:30 am.

I passed the point leading into Sechelt but kept on going straight towards some islands along my path. I called my mom on my cell phone.

These islands are really neat, despite having houses on them. There were tons of eagles, and nests. I got lots of photos.

Just past the main islands were some small rocks only exposed at low tide and I pulled into one, with my kayak held in place by the Sargassum seaweed, and had a great time taking videos and photos. It was warm and sunny and I spent about an hour there. 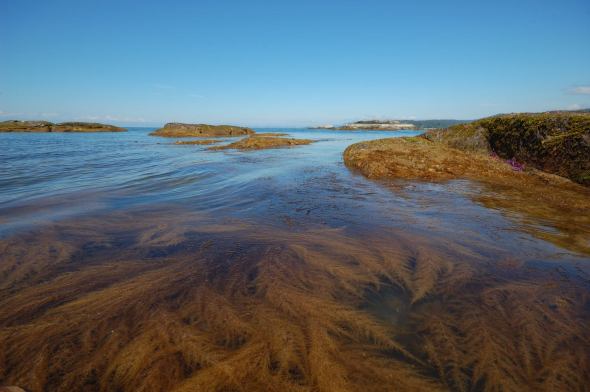 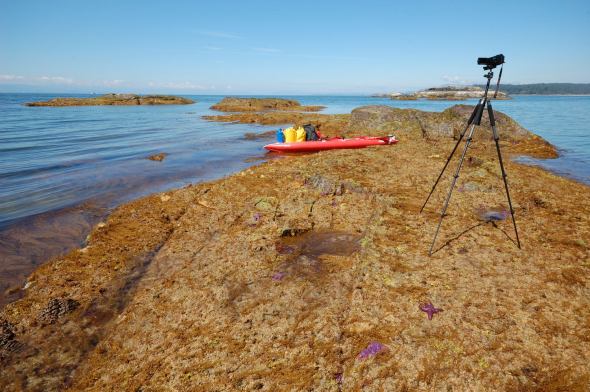 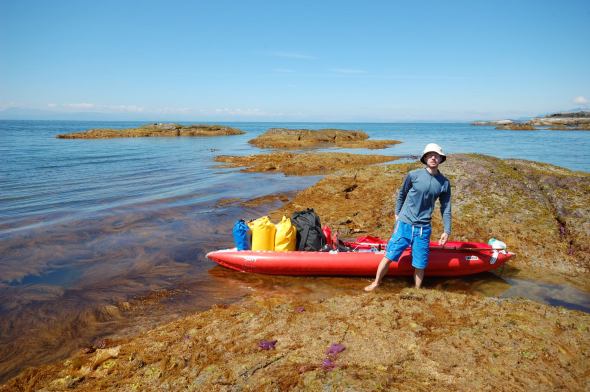 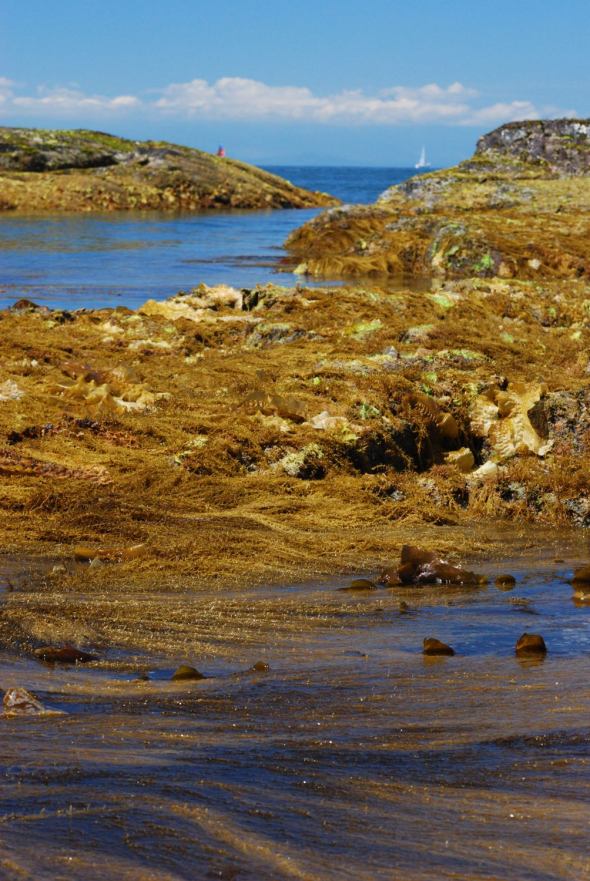 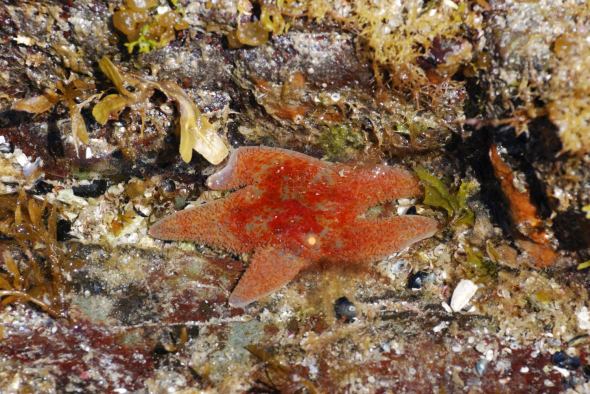 When I continued on I startled some basking seals and sea lions who jumped into the water. 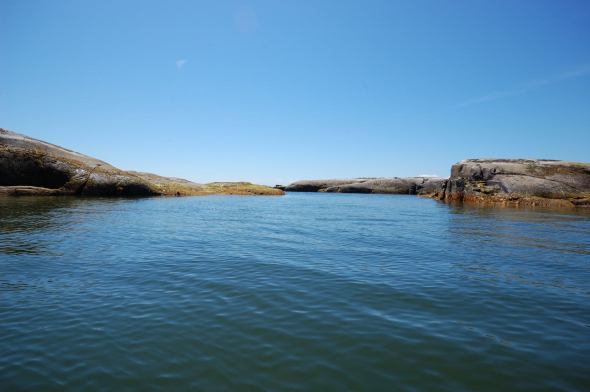 My arms were feeling much better today. This alternating rest day strategy seems to be working. I continued past Sargeant Bay, a small coastal provincial park. 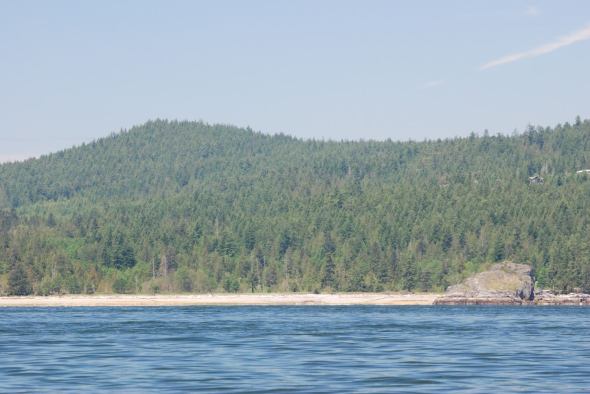 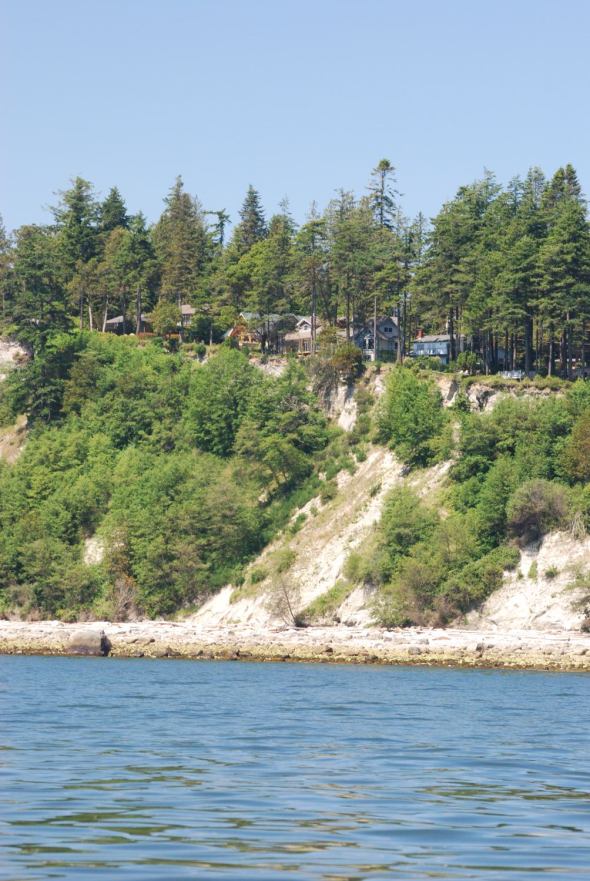 My destination was a small cove on the southeast tip of Thormanby Island. Most of the east side of Thormanby Island is a provincial park. It is a sizeable park. But it’s an island, and therefore doesn’t have quite the same degree of biodiversity as an equivalent sized park on the mainland would, as island ecological studies say that smaller areas have less capacity to support a wider range of ecosystem types and stable populations of land based apex predators. 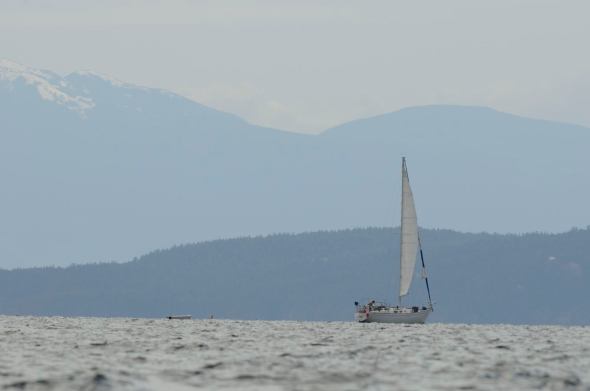 The wind blew me over to my destination and there was another sailboat in the cove. I said hello and asked if he minded me staying at the other side of the cove. It turns out I could have gone to any other of the coves up the island in solitude since there were not other boats there, but I didn’t know that. This cove is very nice and I didn’t mind the company. This boat had one man and several kids. Then a couple other boats came with more kids. It was a noisy evening but I didn’t mind. There were also a lot of fishing boats outside the cove and around the nearby light station. I guess it’s good fishing here. 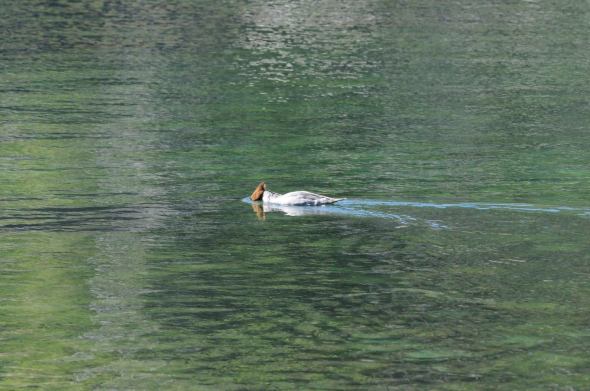 This is a beautiful spot. With the wind as a tailwind from the southeast, it gets kind of hammered here from the waves funnelling into the cove from the open Georgia Strait to the south. There is tons of wood and styrofoam washed up. And all the trees are quite windswept. It must howl in here during storms. There is a wet draw in the middle with water-loving alder trees and sedge grasses and ferns. This leads back to a lake apparently but I didn’t go back that far. On either side of the draw are dry rocky knolls with arbutus and douglas fir. These knolls are covered in lichens and mosses. Since no one walks around on them they are in great shape. This pattern is typical for east Thormanby Island. You can look on Google Earth and see a maze of more verdant greens from the alders in the wet draws, separated by the dry rocky knolls. 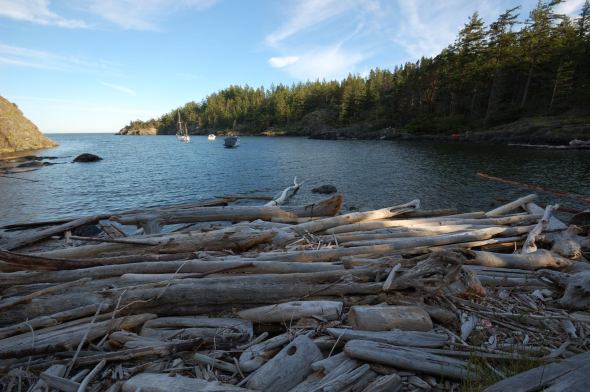 I went looking for water up the draw and despite it having rained hard a couple days earlier I found no obvious running water, just a muddy spot with an inch of water over it. I’d have to filter that. But afterwards in camp I noticed a seepage spot in the rock face underneath the arbutus. It was dripping about one drop per second onto a perfect ledge where I could put my pot. So I would have a nice supply of water there. It tasted a bit grassy though.

There was the usual assortment of coastal birds I have seen – gulls, ravens, eagles, hummingbirds, swallows, a few types of thrushes, especially the haunting call of the Swainson’s thrush echoing through the forest. I love that sound. I went to sleep with the weather forecast calling for rain and it came again overnight. The next morning saw a shift in the winds from the northwest. This left the cove in the lee and it quieted down to like a glassy lake, while I could hear the wind blowing the other way overhead in the trees on the knolls. The rain also brought out the grass pollen and I had a major bout of hay fever with itchy eyes. Today was another rest day.

Around lunch time the tide was really low and got down to a nice sandy area, exposing a little eelgrass bed. This was great. And the water was really warm too. I got my underwater housing ready and started filming and taking photos. I was really impressed with the diversity here. There were at least a dozen types of fish I saw, and there were lots of them everywhere. I tried doing a beach seine but I only managed to catch some pipefish and jellies. All the other fish swam away because the net is white. I will have to dye it darker in Telegraph Cove when I meet my mom in a few weeks.

Eelgrass beds are an important habitat because they act as nurseries for baby fish. I saw several rockfish hanging out. There were a lot of black eyed gobies on the bottom and tons of different types of sculpins. And penpoint gunnels were all over the place. These guys are intertidal eel like fishes, typically bright green. Some were pretty small but there were a few that were about 25 cm long. I thought I took some nice photos but it turns out I wasn’t holding the button down for long enough, at least two seconds, so I’ll have to return tomorrow at the same time.

I then set out to climb around the rocky bluffs to the north of the cove. These are really nice and give nice views of the surrounding area. There wasn’t as much wildflower diversity up there as I was expecting; the highest concentration seemed to be right next to my campsite. My knee has healed well and I was hiking around no problem. I think those single stressful events like falling on the log on Bowen Island actually help my tendonitis and stimulate the tissue to regenerate. I just have to give it a couple days’ rest afterwards. 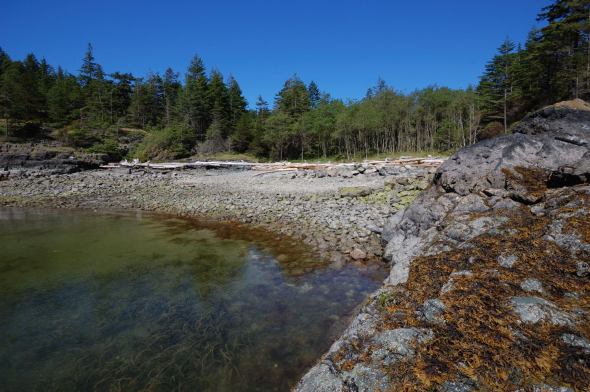 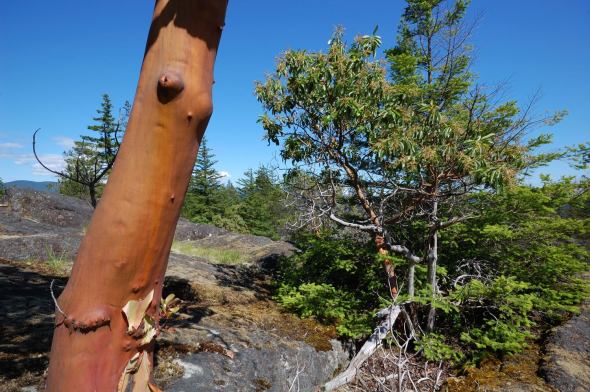 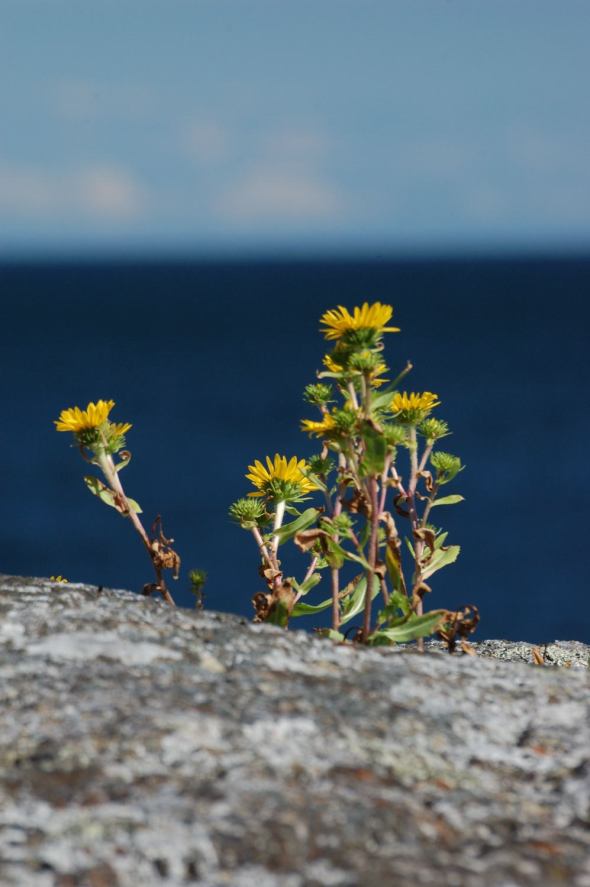 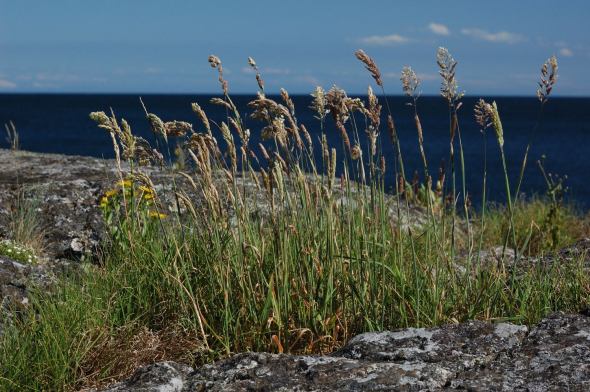 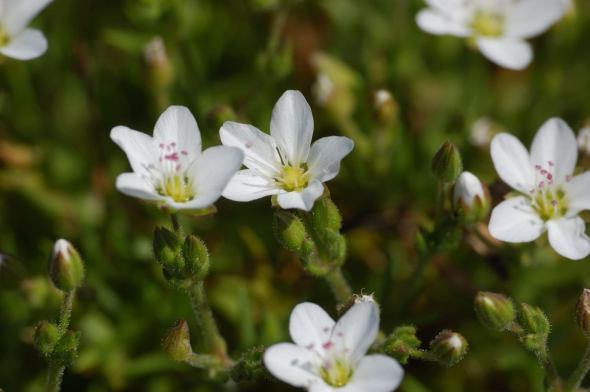 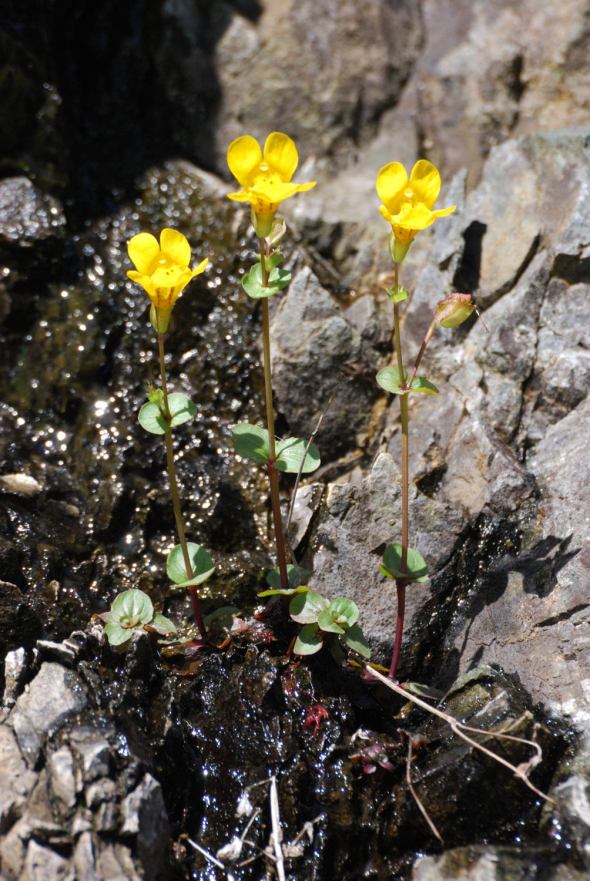 I returned to camp and the boats had all left. That night I was alone. The next morning the wind had shifted to southeast, exactly what I wanted. I have had incredible luck with the wind. It seems to alternate between a headwind and tailwind every other day, which coincides perfectly with my alternating paddling schedule. 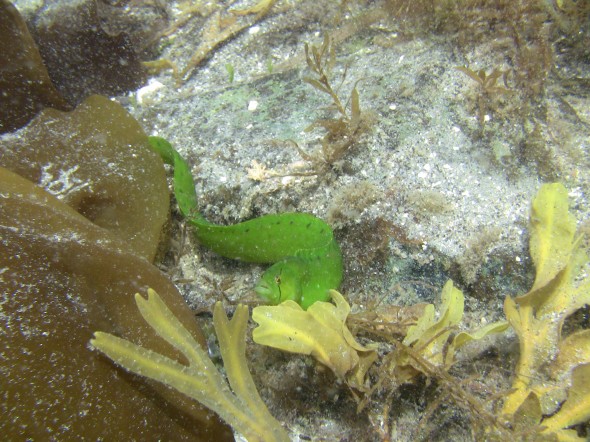 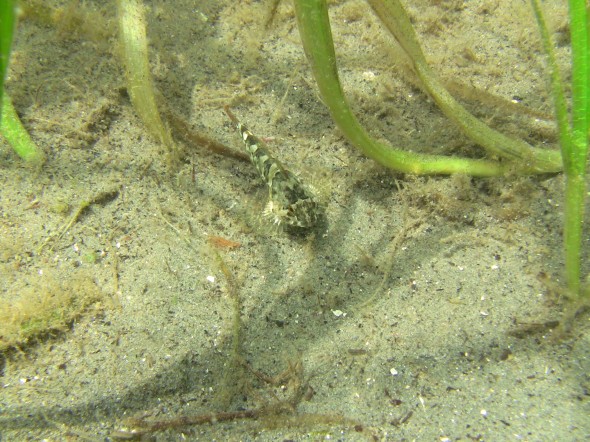 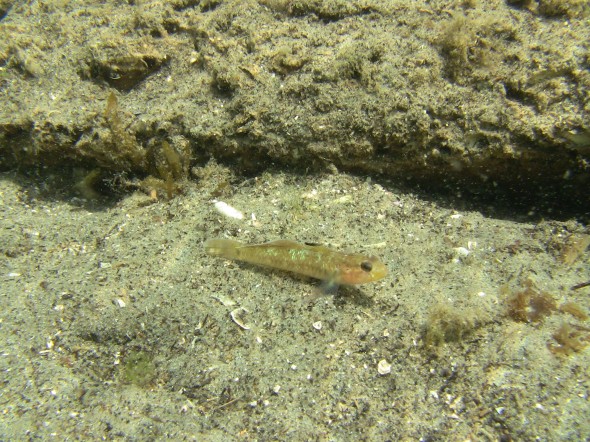 This entry was posted on June 23, 2010 by markbc. It was filed under Uncategorized .