The winds the next morning had shifted to a nice southeast tailwind so I rushed to get out and take advantage of it. 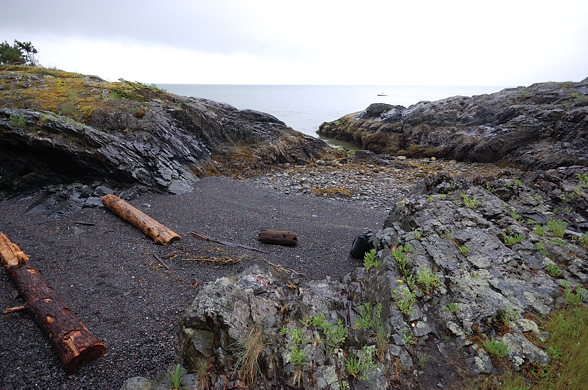 It was now low tide, however, and the nice sheltered gravel beach had retreated to a slippery, narrow surge channel.

I didn’t want to miss the winds so I put in anyways, and it was difficult. With this boat you can’t drag it in to the water full of stuff. It is a great boat in most respects except for going in and out of the water. You have to pick it up and carry it in unloaded, then anchor it and wade in with your stuff and load it while it’s floating. Every boat has its advantages and disadvantages and I chose this one for its versatility and ability to be easily hiked through the forest, and I am paying for this versatility with the difficulty of putting in and pulling out. But it’s worth it IMO. I managed to get off with quite a bit of difficulty but not too much damage.

The weather was cloudy with a bit of drizzle. I quickly drifted in the direction of my destination and saw a couple porpoises a few hundred feet off. I weaved my way through the barrier islands at the entrance to Howe Sound and made my way across the open water to the mainland Sunshine Coast. I was not looking forward to this next section since there are very few opportunities for camping. There are houses along an almost unbroken stretch of about 30 km of coastline here.

I just wanted some Camp – Ing

My plan was to go to Roberts Creek today, about 20 km, where there is a tiny provincial park on the water. You aren’t supposed to camp there, with camping being a kilometre inland in the forest, but I figure they make the rules for the 99.99% of the people who arrive by land, not sea.

By lunchtime my arms were getting very sore. And so was my butt. Every so often I would break to take photos and stretch and when I do this I take my gloves off and stuff them behind the side of the seat. One time, when I pulled them out to put them back on, I accidentally snagged the inflator plug to the seat and pulled it out. Immediately the seat deflated quite a bit and by the time I put the plug back in it had become much more comfortable. Problem solved!

The tailwind stayed with me all day and diminished to near calm by about 5 p.m. when I reached Roberts Creek. The actual park is a couple kilometres past the jetty in Roberts Creek and I just pushed on with weaker and weaker strokes until I finally got there. 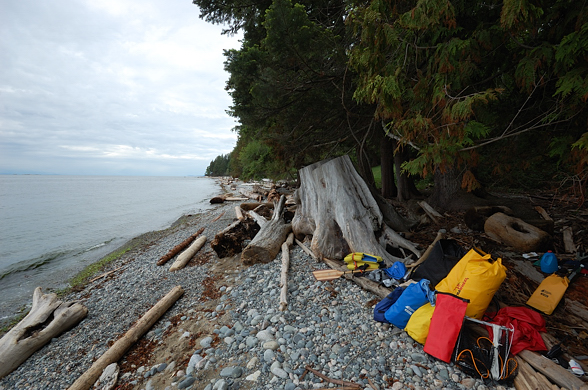 There were moderate waves crashing on the gravelly beach on the high tide which made unloading a bit of a chore, but not too unwieldy.

There were quite a few people going in and out of the water in kayaks and walking around. I can see why, with this being the only accessible waterfront park around, all 300 feet of shoreline of it, except for the pier in the middle of Roberts Creek “village”. I found the most secluded spot I could under the trees, about 100 feet from the neighbours’ house. I waited until it started getting dark and then set up my tent. I was not looking forward to spending a whole day here tomorrow, but I had no choice since my arms were so sore. I needed to take it one day on / one day off for the first while until I got stronger. Finally around 10 pm the last people left.

I woke up early to a falling tide and planned my day.

I was going to do some things to the boat and beyond that, just  sit around and take pictures. 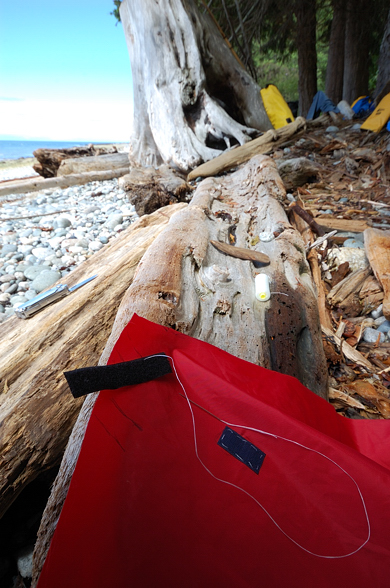 There was a good northwest headwind so it was fortunate that I took today off. It turns out that sometimes being forced to stay put and contemplate things opens up observations you would have otherwise missed. 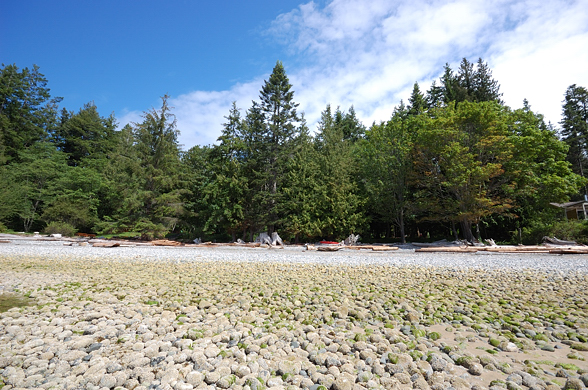 This beach took on a new character at low tide.

Below the rocky sloped beach was a flat sandy beach 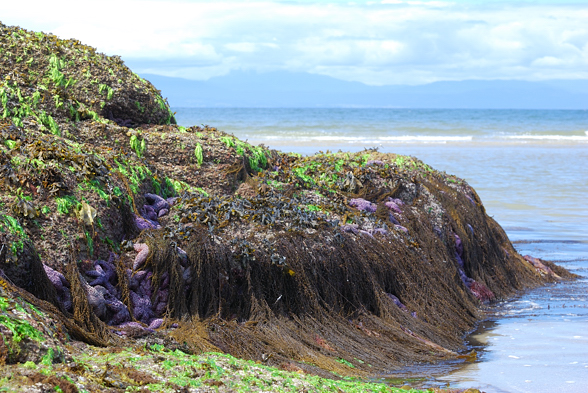 with a few large rock outcrops. 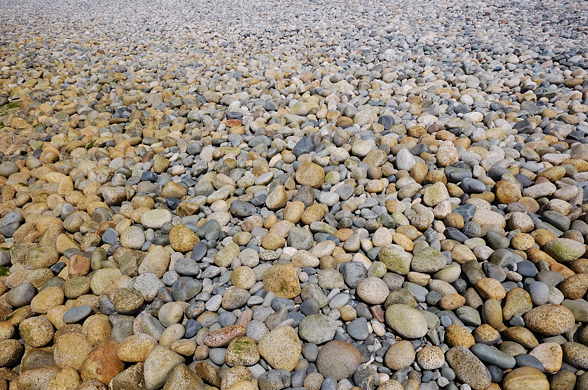 This attracted a whole new set of bird life. An eagle was sitting on one outcrop in the distance.

I watched ravens search for whelks.

and then fly them up to the rocky part of the beach and drop them.

Somehow they follow where they go because they always seem find and eat them. They must have good eyes.

They did this for quite a while and I imagine they cleaned out most of the whelks from that rocky outcrop. Birds on this coast certainly don’t have a bad life, at least this time of year. These guys get treated to escargot every day. A seagull even tried dropping a shell but it landed on the sand. This served as a reminder that not only do the tides increase the biodiversity due to the increased habitat zones they create, but they also provide a way for nutrients to flow from the sea to the land as non-diving birds and other animals descend for the bounty. I even saw a garter snake way down in the intertidal zone too, probably looking for little shore crabs. 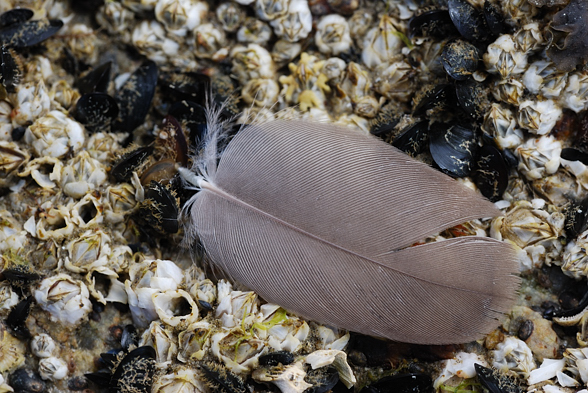 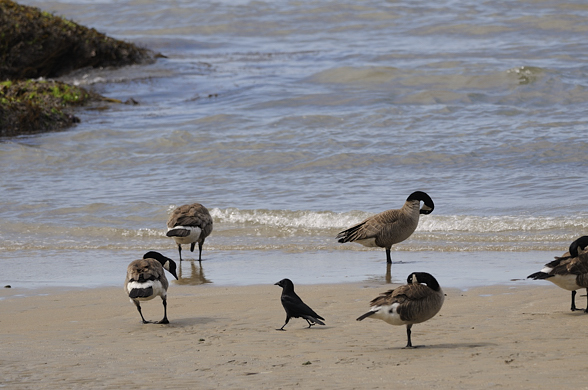 Then the tide came up and everyone took off, with only the geese left to pick off sea lettuce (Ulva) from the high tide line. 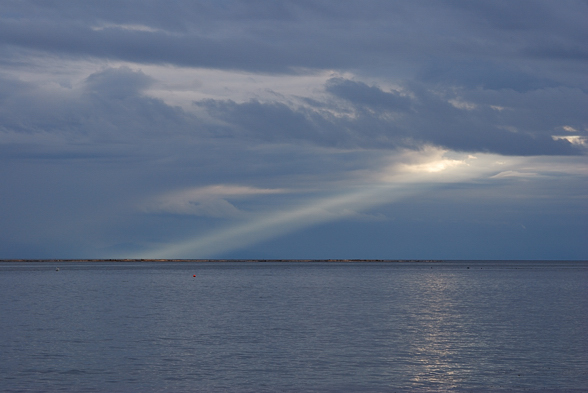 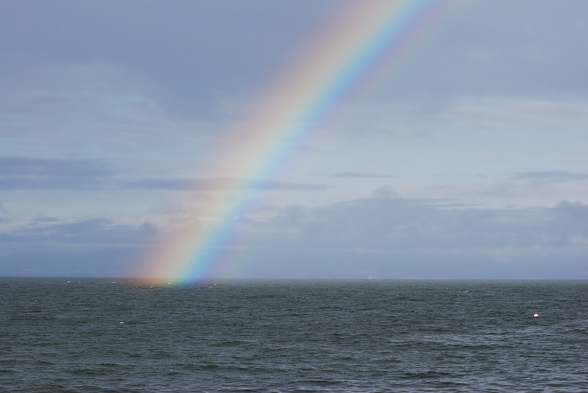 Such a nice rainbow deserves another shot.

I prepared for another night and around 9 p.m. the teenagers showed up with their loud trucks. I didn’t mind too much and the party raged on until midnight, and a few of them stumbled onto me in my tent. Finally after a few broken beer bottles they left. I will be glad to hit the seas again tomorrow.

This entry was posted on June 23, 2010 by markbc. It was filed under Uncategorized .