You can see how high the tide came up, from the tideline to the right. Now just imagine me, standing in the dark, at midnight, with all my gear up on that green grassy / rocky area, cursing the tide. It’s kind of funny thinking back to it and I should have taken the opportunity to commune with nature under the moonlight. But all the frustrations from the last few days just came out. I felt much better by morning!

This is one of those times when I wish I had some time lapse video to show this starfish moving along that rock. 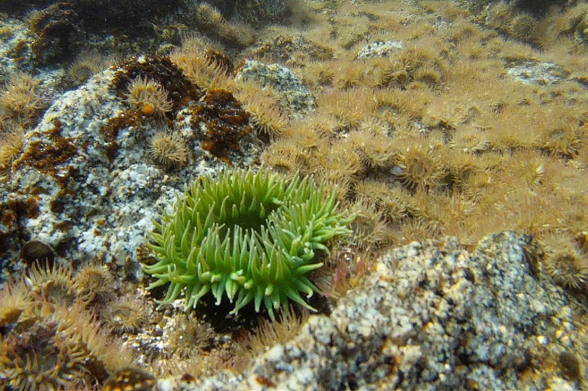 One of these anemones is not like the others… but they are of the same genus, Anthopleura.

It was the season when the kelp starts to fall apart and calls it quits for the year. 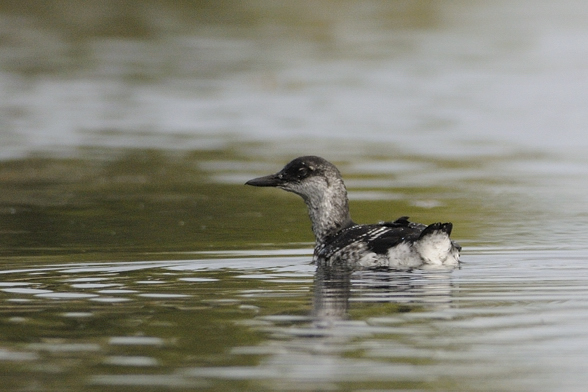 More calm skies. I lazily followed the shoreline up all day in the sunshine. What a nice way to end the trip. But, just like last year, the nice weather didn’t seem to arrive until the last day!

I think this is a solitary sandpiper. Definitely not on sand.

I was kicking myself for not checking the ferry schedule back at Hakai Beach Institute. I had no cell phone reception so I couldn’t get on the internet. At least I knew the ferry went north today. But would it head south tonight? Tomorrow? Three days from now? I wouldn’t know until I got into town unfortunately. I may have spent another night out if I had known, and I passed by an interesting crushed shell campsite that apparently has petroglyphs, because I didn’t want to miss the ferry.

This fishing boat was trawling and was just offshore from my campsite when I set off in the morning. They kept pace with me all day into Bella Bella. 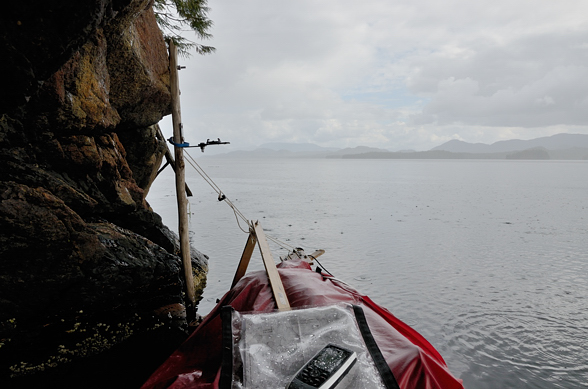 As I was crossing a big bay the stormclouds brewed above me. I wasn’t in my drysuit. They soon burst and I raced to the other side to take shelter under this cliff and was almost totally out of the rain for about a half hour.

One of the last points before reaching Bella Bella.

Hah, and we were back to jumping salmon. The closer I got to town, the more frequent they became.

Nice! There is a hatchery on a creek right by the ferry terminal and they were all back for that. It seemed everyone and his dog was out in his boat trying to catch them but they didn’t seem to be biting much.

I came ashore at the ferry terminal and called my mom on the payphone to get the ferry schedule — tomorrow evening the red-eye came through. OK, that was settled. I wouldn’t fly back.

I wasn’t sure where to camp so I paddled another few kilometers into town. It was getting late and when I got to that public wharf it was really busy so I decided to head back to the ferry terminal and camp there. 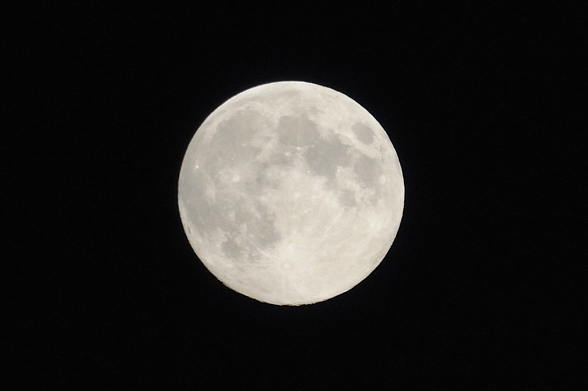 I guess that’s why the tide was so high last night! The ferry terminal wasn’t the best place to camp because it’s at the end of one of the few roads on the island so anyone who has a car drives out there to see what’s going on, and they also came to see the salmon. So I had lots of cars drive by me, and a few people stopped to say hi. One lady warned me about a black bear in the area.

This entry was posted on November 14, 2012 by markbc. It was filed under Uncategorized .