The weather was decent.

The dogs had been barking most of the night and they came over to say hi while I loaded up. I felt like I should give something back. I tried offering a peanut butter covered date but it wasn’t a hit.

I headed up the river to the estuary and went by this gull that seemed to follow me. It got quite close. 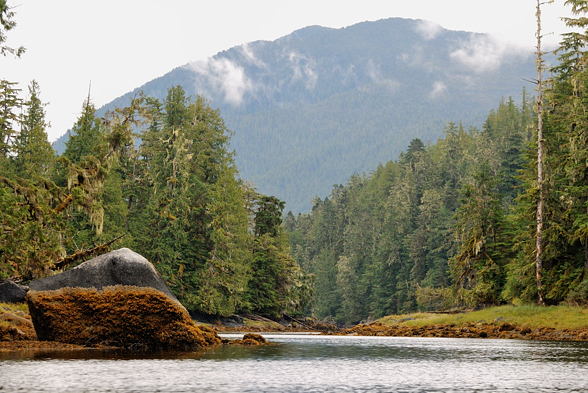 The tide was way down. And the water was brown due to all the tannin runoff from the rain. The salmon were gone. Overnight, the seasons had changed.

It was the season of plenty with berries everywhere and salmon in the rivers.

There was a noisy pair of eagles near here. 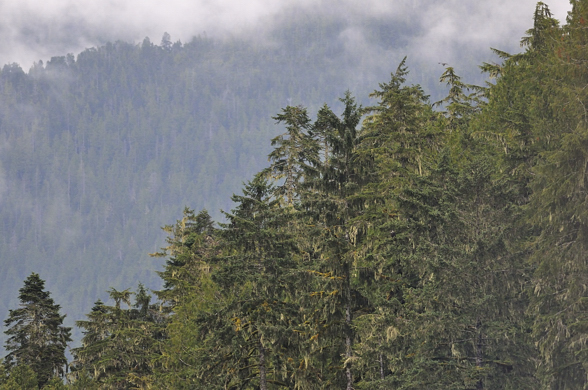 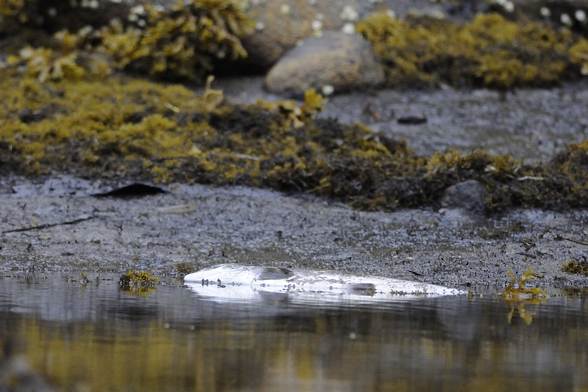 Ahh, there must be something going on upriver…

I passed a family of river otters and there was a funny noise coming from a half submerged tree on the bank. It took a while to find the source which was a baby otter and mother. It was super cute but I couldn’t get a shot of it in time.

As the meadow came into view I saw a black blob moving along the shore.

The river was getting shallow and I had to get out and start walking up. These headless salmon are from wolves. They only eat the heads, some think it’s due to parasites in the meat they want to avoid. We have an advantage because we can cook our food. 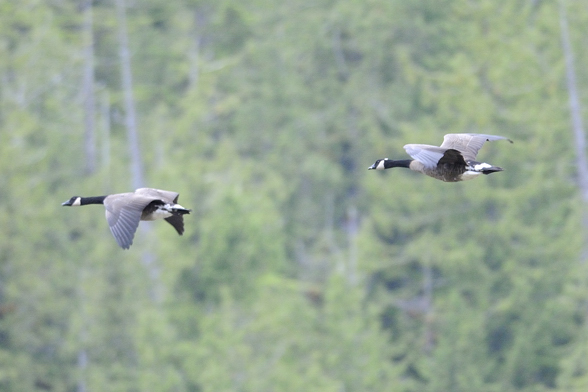 The place was noisy too with some Canada Geese. 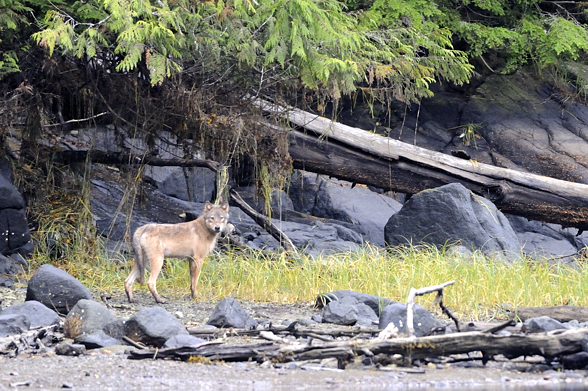 It wasn’t long before I saw the wolves on the opposite bank, near where a branch tributary of the main river was joining and forcing the salmon to go through shallow water. The bear that was wandering down the shore joined them. 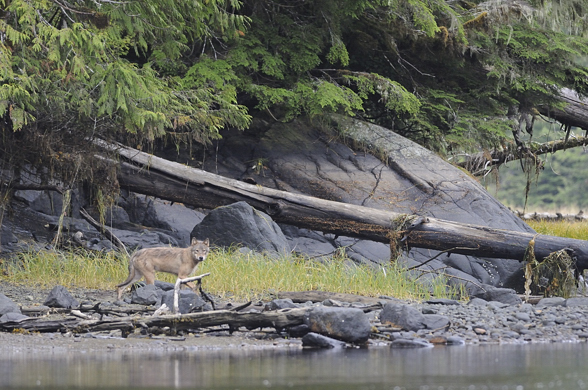 It turns out I was pretty lucky to see the wolves. They normally only come out at night and they avoid people. Considering that there there’s usually a person or two coming up to the estuary every day for various reasons, I’m surprised I saw them. The timing of the low tide helped with that. I was pretty far away but the clicking of my camera sent them off. Damn you Nikon!!! Time for a new body. Maybe the D400 when it comes out. 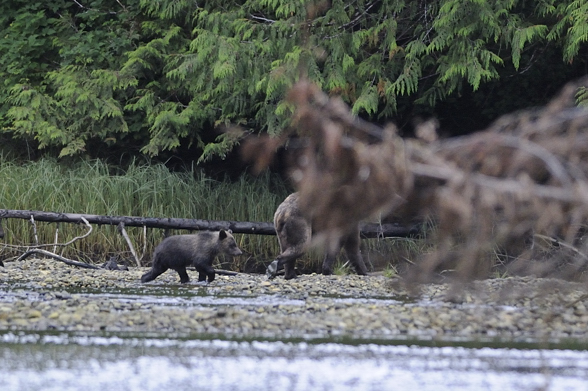 I went further up to a main junction where there were some salmon making their way up the shallows. They are really hard to get close to, I’m impressed the animals can catch them. I contemplated going up the side channel a bit to see what was there but the water was too shallow. Good thing too, because a few minutes later I looked up that channel to see a mother and cub come wander around. Too bad there was a tree in the way! 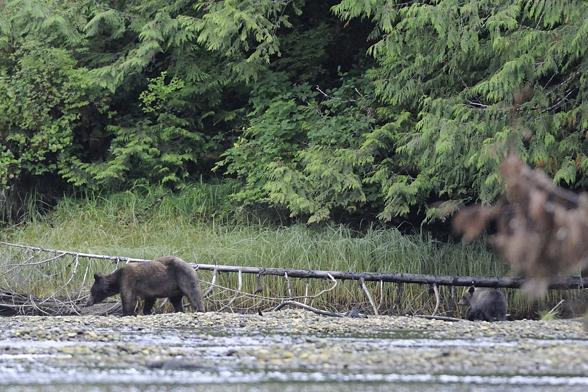 I never did actually get a good shot of the two together. Then they ambled off again. 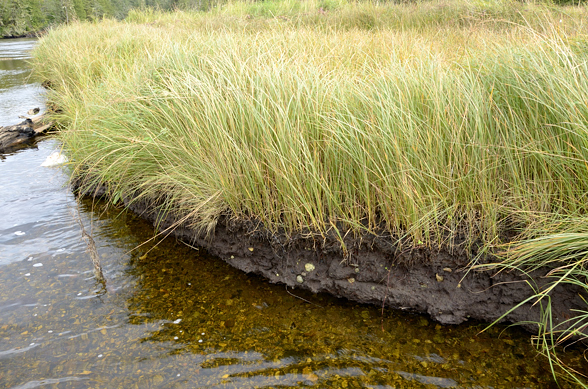 The meadow seems to consist of sticky organic mud matted together with grass roots.

The forest here is very beautiful. It is old growth and has never been logged. There is something magical about being in it.

Biological oils from all the productivity going on here were getting caught up in the downed logs. These licorice ferns were making one last dash for life. 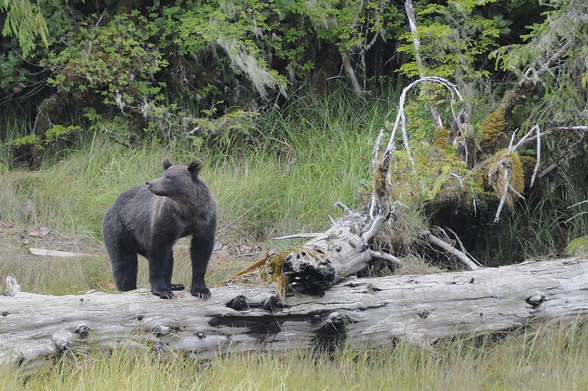 I spent over half a day up the estuary, and the time went by really fast. As I was heading back out with the tide the bear was back at the salmon spot, but the tide was high so he wasn’t catching any salmon.

I find that my kayak is somewhat limiting in some respects. I’d like to be able to ditch a lot of my gear sometimes and just go up the river for a few days and camp out. I would love to camp in the forest overlooking this feeding spot and get up with the break of dawn to see the wolves. That way I wouldn’t disturb them, I could remain in the forest. But what would I do with my stuff and food? Without a sailboat or something similar to store my food and excess gear in out at the bay, I can’t do that. Oh well, the kayak provides other advantages. 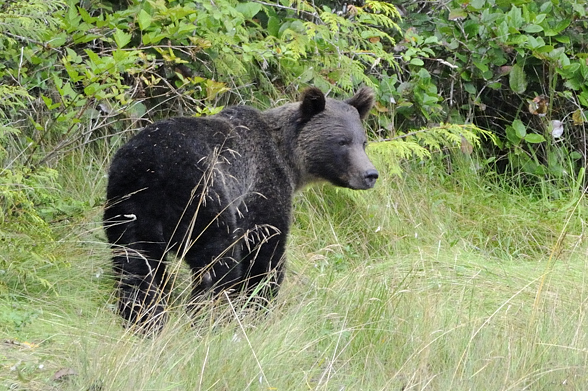 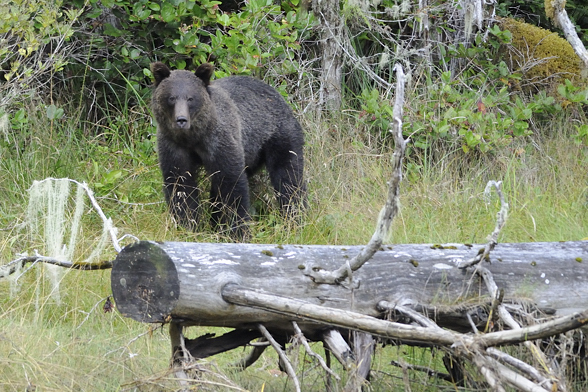 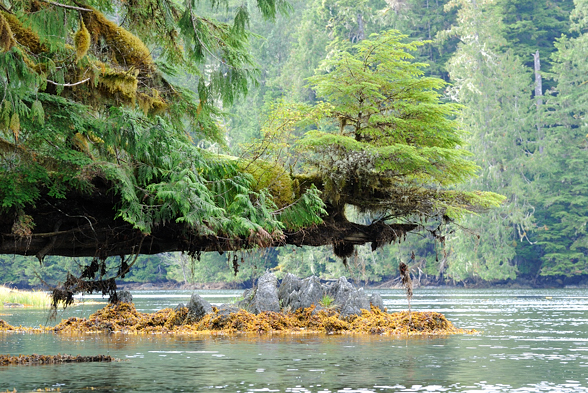 Everything is covered with growth here. 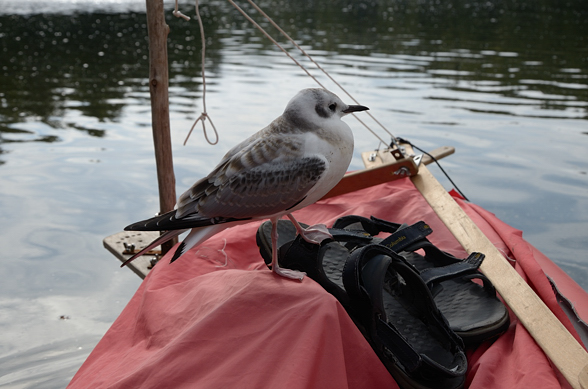 I came back to that friendly gull. He was sitting on some rocks and wasn’t at all afraid of me. I put my paddle up to him and he climbed on board. I thought I could have a new pet. But then I realized he might be sick, who knows, maybe with avian flu or something. So I put him back.

As I rounded the bend into the bay I looked out to the ocean and saw the big triangular mouth of a humpback shooting out of the water right at the entrance to the bay. I couldn’t believe how much life there is here. I went out and tied up to the kelp but he had left.

I went up to the construction site because there was apparently a keeper there minding the place with everyone gone back to Bella Bella. I wanted to camp up there because I’d had enough with grizzlies wandering around my tent. The keeper was the quiet foreman from before and he said I could camp there, but he wanted to be left alone. He came here to have his privacy. I obliged and set up camp on the outskirts. I tried to dry out a lot of my gear in the last rays of sunshine, and then I downloaded photos to my computer.

The dogs kept me company. They have a great life here. It might end up being cut short though because the wolves will probably get them at some point, with them chasing bears way up the valley. I guess that’s their life, short but exciting. I’ve found that I feel the most alive when I’m in the moment, when decisions you make could mean the difference between life and death, and you have to rely on yourself and your own capabilities. That’s what many of us urbanites tend to yearn for, to escape the drudgery of the 9 to 5 where everything is predetermined and “safe”. But is it really any more dangerous out here than in a city? I can walk down the sidewalk downtown and at any point just take two wrong steps and get run over by a truck. What’s the difference? It’s just that out here there’s no one to save you (at least immediately). In the city we get a sense of security from all the people everywhere.

It seems like everything comes together to make the Koeye a special place. The barrier islands open up right across the Sound, just enough to let the big open ocean waves through. The bay is a little sandy jewel hidden behind a headland. There is a lake up the river that I didn’t get a chance to see unfortunately, even though there is a trail leading up to it (I couldn’t find it).

In my very short time here I sensed a different vibe, the First Nations presence seems to be more “in tune with nature”. I know that sounds cliche but I get a different feeling here than in mainstream society. Even our official parks are an extension of mainstream society, at least their administration, as we tend to visit them to “consume” the wilderness as an antidote to our urban lives. I guess I’m no different in what I’m doing.

The white man outposts along the coast seem to be just extensions of the city with people flying in from Toronto to get in a weekend of fishing where they bag as many fish as possible from their noisy powerful speedboats that can get them from A to B in mere minutes. Their fish are prepared for them by the staff, and then they fly back out. All the while, satellite radio and TV keeps everyone entertained with the creature comforts of home. They never actually have to leave the city; it comes with them. I guess it’s tempting for me to develop a holier-than-thou attitude, and a little unfair, as I make my living from consuming the natural world just like everyone else does.

These aren’t simple issues because this area has to “produce” economically in order for our politicians to leave it semi-wild. If the fishing lodges didn’t bring in the money and if the people on the cruise boats didn’t want to see beautiful vistas of unbroken forests then the whole coast would have been logged instead. Get away from the more frequently visited places like the Inside Passage, and it pretty much all has been, except what was lucky enough to be locked up in parks.

And most people can’t get in a kayak for two weeks to experience the coast; the cruise boats are their only opportunity. Are they being any more “consumptive” than I am? Hell, I bring pre-packaged plastic satchets of ready-to-go food to power my journey. Where did those come from? Most of my gear is made of plastic. Plastic comes from oil. And I flew in on a noisy gas-guzzling plane.

It wouldn’t be a nice place here with thousands of kayakers everywhere experiencing it up close and personally, and the grizzly bears up the Koeye River sure wouldn’t appreciate it either. So I hope that people can experience being immersed in the wild through my accounts here, without actually having to go through all the motions themselves. Then maybe my impact on the wildlife will be somewhat mitigated.

This entry was posted on October 26, 2012 by markbc. It was filed under Uncategorized .