Well the guys were up early so so was I. Again they fed me breakfast. They were going to fly out in the afternoon so all morning they would be getting their stuff together and cleaning up. A new crew would then be coming in. They also gave me a map of the road and terrain I would be going through which showed cutblocks and forest cover. They had just hiked the road the other day so he wrote down certain hazards and landmarks for me to use as a guide.

I got my boat inflated in the parking lot and started trying to attach the wheels. I really should have practised more at home. No problem because I was in a forestry camp and there was wood and supplies everywhere!

The problem was that when I filled my kayak with all my gear, the weight made the wheels rub the underside of the boat. So what I did was get strips of cedar bark from the slash piles and wedge this in between the boat and the wheel assembly, which lifted the boat a few inches to give it clearance. This worked.

Then I tried to get as much weight as possible behind the wheels so the boat would ideally balance on the wheels without me needing to lift the front end with a lot of force. This was mildly successful as there was only so much room behind the wheels.

I said goodbye to the guys and started heading up the road. 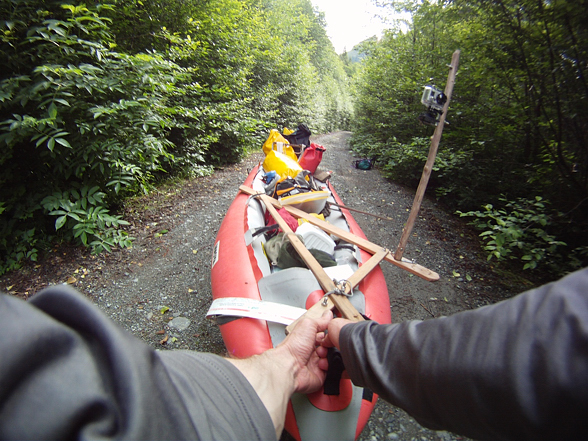 Things were great for the first hundred meters, then the road turned left and went up a steep hill.

I had to take out my heavy food bag and backpack and hike these up first because with that weight in in the boat I just couldn’t move it up the hill. I wasn’t heavy enough and my feet skidded on the gravel. 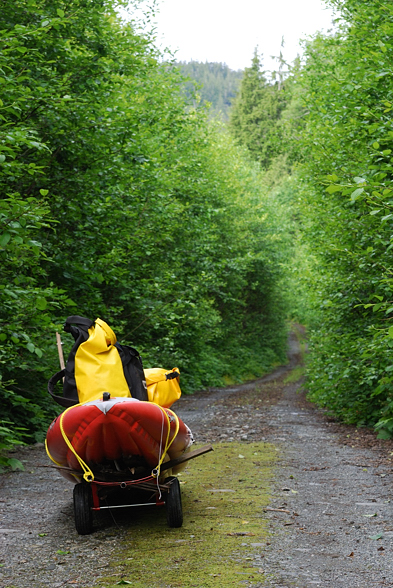 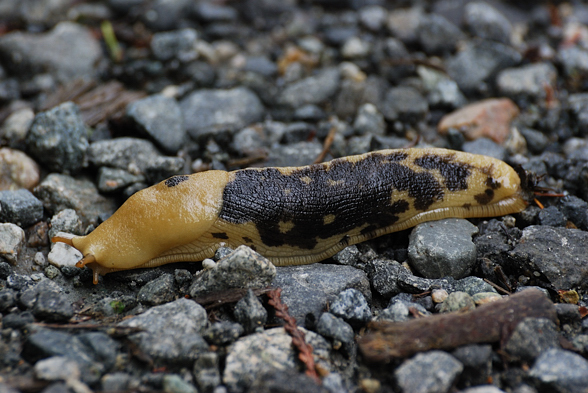 At one level spot I heard a lot of bird noise so I stopped to take it in. There were hummingbirds, and these always seemed to be around. They would come come check out all my bright colours, it must be like bling to them. I was also still above the inlet and I could hear ducks flying overhead since they seemed to fly inland sometimes. I’m not sure why, if they are going over to the next inlet or maybe a lake or pond. But at this spot there was also a Swainson’s thrush bathing me with its enchanting call that echoes through the forest, one of my favourite sounds. And then there was a couple of ospreys circling above. What a bird spot!

I continued on after recording some of the sounds, which I will put up later when I get that option enabled (I know I always say I’ll do this but I will at some point). I could only go maybe 50 or 100 meters at a time, after which I’d have to take a break and switch arms and body positions. The boat was heavy and I was lifting a lot of weight. And the road started going down a bit too, which was nice. So far so good.

Oops. Sometimes if a wheel hit a rock the setup could be unstable. At this point I decided to filter some water from the adjacent ditch. It was brown but drinkable. 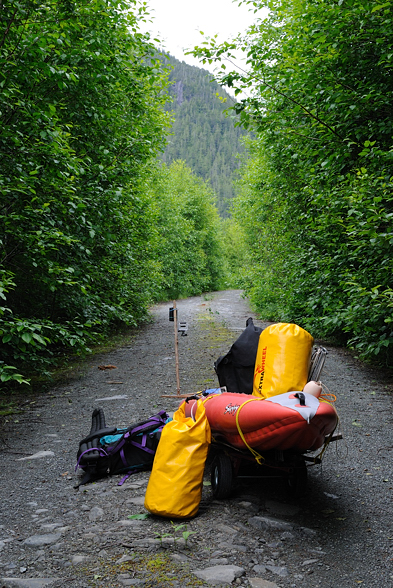 I came upon some interesting mushrooms growing in the middle of the road. I stopped to take some photos and then I was startled by some strange animal noises just ahead on the road.

Soon I saw that it was a grouse. 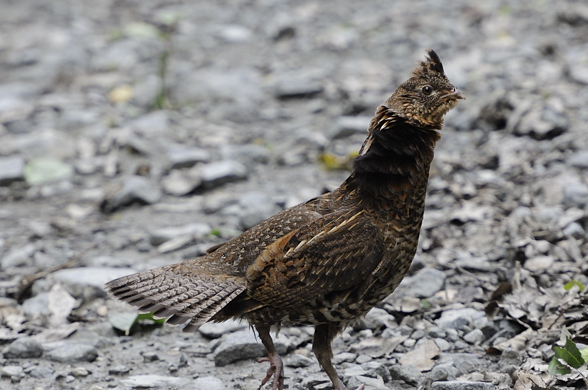 It was acting strangely. If I tried to walk by on the road it would run out in front of me and cross over. It must have been trying to divert me away from its nest. I spent about 10 minutes trying to get photos of it. 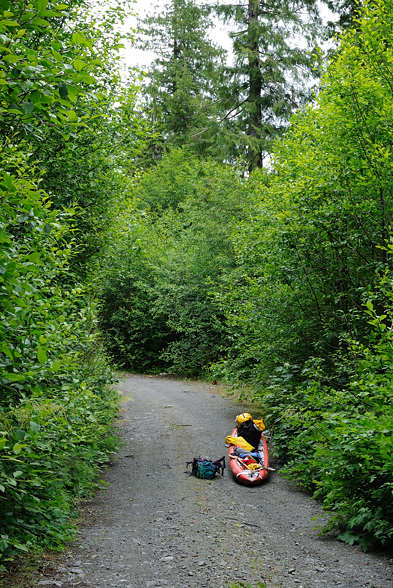 I continued on for a while and then got a bit tired; it was early afternoon – sleepy time. And it was starting to rain. So I lay down in the middle of the road with my kayak drip skirt over me as I snoozed in the light rain and wind, and munched on dried mangos. I must have been there for an hour. I watched a bird come to drink from the puddle beside me, which I also did afterwards but I filtered it.

The road was flat and I was making good time. 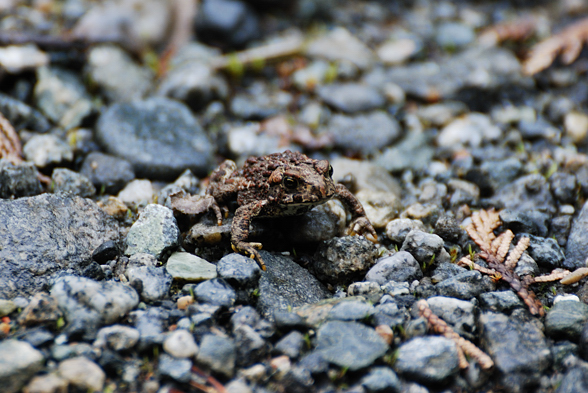 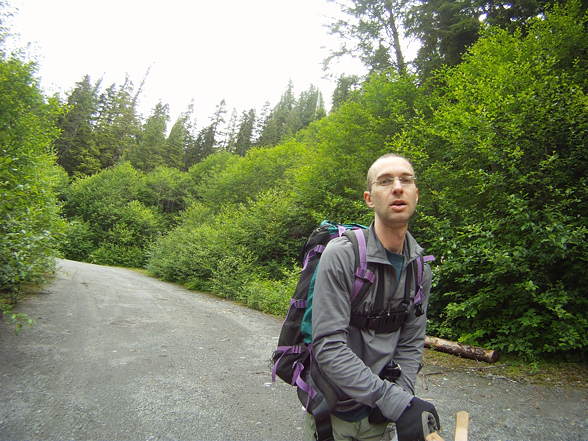 I stopped at the first cutblock and ate more mangos. There was a steep little hill up from here. I made a video of me pulling my kayak up the hill.

My destination for the day was the big cutblock not far ahead. The weather looked like it would start closing in so I hoofed it. This is the view looking west from it.

My timing was good since as soon as I set my tent up it started raining fairly hard, at around 5 p.m. I waited out the rain for an hour and a half, snoozing of course.

I had a 15 minute break to get out my GPS, organize, and brush my teeth. I only ate dates for dinner as I wasn’t too hungry. I listened to the weather report and then the batteries were pretty much dead. I hoped I’d see some sun soon because that was the only way to charge them.

More hummingbirds came to visit me every 10 minutes. I love those guys.

I was a little worried about bears, with all the sign around. Fortunately though there wasn’t too much in this cutblock, and it was on high ground so there wasn’t too much to attract bears here anyways. My concern was that with the wind I wouldn’t be able to hear one until it was on me. But I took security in my little house on wheels. My stuff gives me security. When I lose control of my stuff, I get frazzled.

I reviewed my photos from the last few days. I noted that I use all four lenses (each on its own body – from wide angle to telephoto) roughly equally, so that was validation of my lens choices for the trip.

I could hear frequent planes off in the distance. This was a nice campsite with long views across the shallow valley to the “mountains” on the other side. I could see the weather as it came in and swept through.

And there was a beautiful fragrance permeating the air, the smell of sitka alder. This is a shrub / small tree that lives in higher elevation or cooler coastal areas. It has a wonderful scent. The olfactory sense is amazing at bringing back memories. I think there is actually a neural connection in your brain between scents and memories. Whenever I smell sitka alder it brings me right back to hiking the Joffre Lakes trail many years ago, along the Duffy Lake Road into BC’s interior.

This was the last fresh cutblock on the map, and I was figuring that the road quality would quickly degrade immediately afterwards since it wouldn’t have been maintained recently. That’s also one reason why I decided to set up camp here.

This entry was posted on July 25, 2011 by markbc. It was filed under Uncategorized .