Luckily for me the wind stopped later in the evening and I had a really nice sleep… up until I was awoken early by some breaking branches and the thud of big footsteps right near my tent. I freaked out and woke up really fast. Thankfully I soon realized it was only a squirrel up a tree dropping pine cones to the ground. I’m a little jumpy. I lay there until it was bright enough that I could see colours and then decided to get up. I have to get up really early to put in any decent miles before the wind picks up.

I felt bloated from all the rice dal I ate the night before – just like way back on West Redondo Island. I made my breakfast and then went to finish topping up all my water vessels with freshly filtered water. I didn’t finish before my water filter broke! The piston is acrylic which is brittle and the constant cycles of tension from pumping just cracked it right off. Great. Now what was I going to do. I did not want to risk intestinal infections with this stagnant water. And I did not want to have to boil all my water. Oh well, maybe I could fix it.

I tasted the water in my drybag. It was disgusting and tasted like bitter plastic. I weighed the prospects of potentially running out of water or drinking plasticky water and decided the latter was more appealing. I may regret that in a few years if I start developing female characteristics or worse, come down with cancer. Anyways, I had a whole gallon of water that wasn’t in my drybag which I could drink. 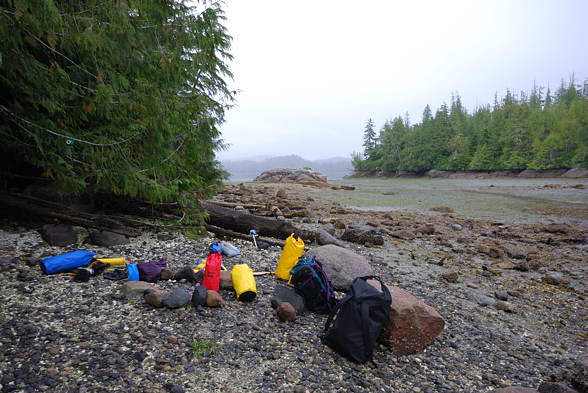 The tide was out way past that distant rock

The weather was perfectly calm and foggy. What a difference a night makes. The place looked totally unlike the day before. The tide was way out, and I mean way. I had to hike my gear a few hundred meters along the shore to get to the beginning of the mudflat where I was going to put in. 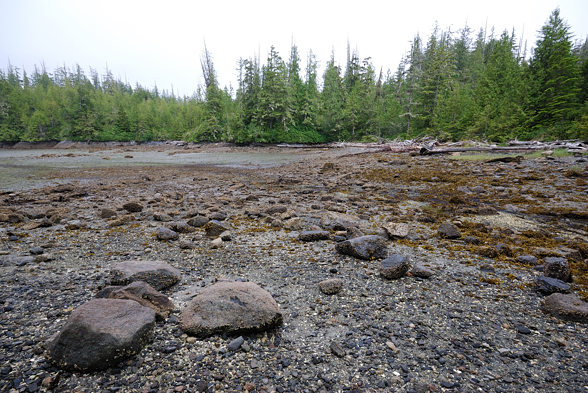 The head of the inlet by the campsite was totally dry.

I then had to hike another hundred meters across the mud to where the water was knee deep, enough to throw the boat in safely. That whole affair probably took the better part of an hour and then I was off.

Halfway there. Now I had to hike my stuff out to the water

Only missing ingredient: me

The water was dead calm. Soon I came across more porpoises. They took off. As I rounded the point which then led up the southwest side of Eden Island, I could see the tiny remnants of the open ocean swell that had made it all the way down here. You couldn’t see it out on the water but when you were close to shore there was about a 1 foot slow swell that lapped the shoreline.

Looking east up the southern shoreline of Eden Island 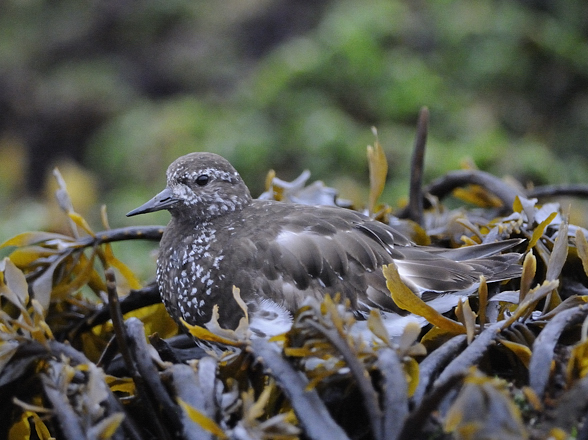 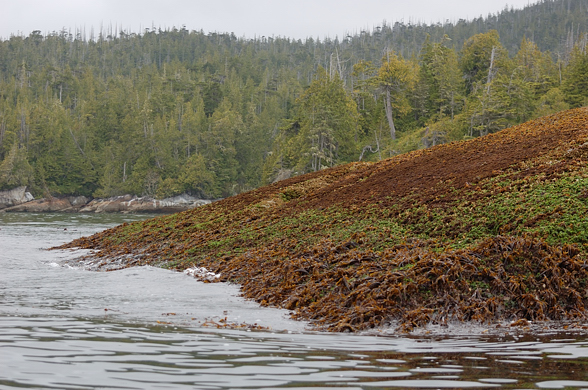 This is where the above bird was frolicking, in the closest seaweed just above the water. You can also see the minor swell

When I got to the westernmost point of Eden Island before I crossed over to Broughton, I came across a colony of California sea lions. I did not want to get too close because I didn’t want a big male taking a bite out of my boat. I got some photos from a distance and continued on my merry way across the channel to Broughton Island. 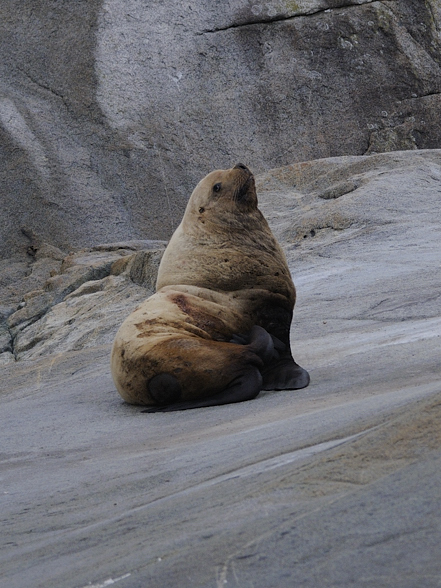 I got distracted for a moment by this rhinoceros auklet

Midway across, the sun started poking through. I was wondering what this meant for winds. 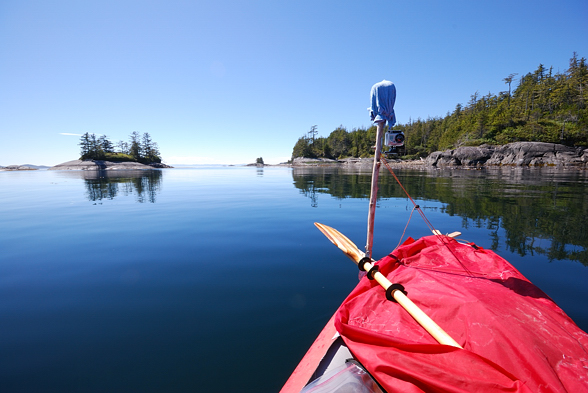 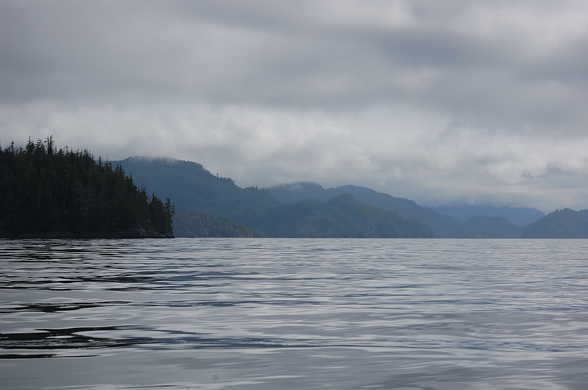 Looking up the channel separating Broughton Island from the mainland

I kept going as the day went by and the wind didn’t pick up. The sun was shining and I was blown away not by the wind but by the beautiful pastels of light green forest against the deep blue sky and dark green ocean. They call this the “Emerald Sea”. And I had tail currents for most of the way too. 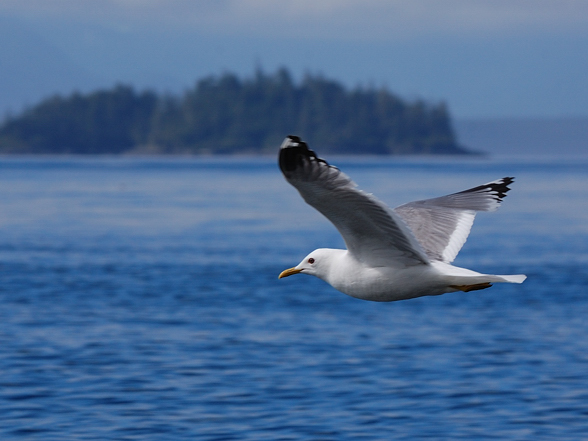 Looking back along Broughton Island towards Vancouver Island 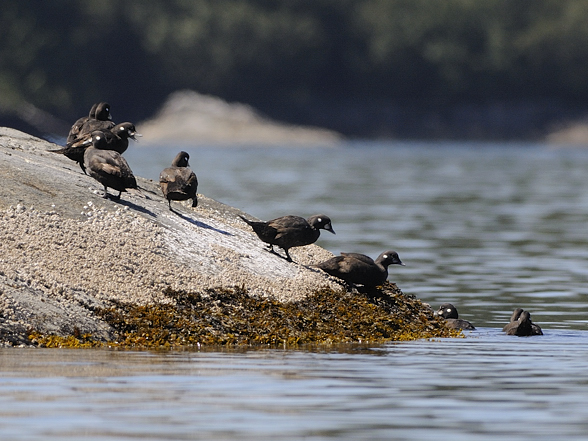 Eventually I had to take a break for lunch and I tied off on some kelp in a little bay and had more dates and peanut butter. I soon got moving again because I wanted to take advantage of these great conditions. I would frequently see large comb jellies, or ctenophores, which glisten with rainbow cilia along their bodies as the sunlight is refracted like a prism. I had seen millions of them back in Desolation Sound and the southern portion of my trip, but none up here. These were a different type, much larger at 5 to 10 cm long and solitary. I only saw a few and was wanting to take video footage of them since the colours are so beautiful. But I decided not to in order to save time. I figured I would see them again.

The forest here was becoming noticeably different – more windswept and “hypermaritime”. There were a few old veteran Douglas-firs, which is a tree more typical of southern drier climates. This should be about the limit of their range up the coast. But they were also growing alongside yellow cypress, which are more indicative of subalpine habitats. Sometimes when ecoregions meet you get strange mixes of species. This is another reason why parks are important, because they allow for the dynamic movements of species to continue between different ecosystem types, especially within a changing climate. One of the big conservation efforts today is the Flathead River Valley in south eastern BC which is the meeting place for several different ecosystems from all sides. As a result it has the highest biodiversity in BC.

For hours I continued my paddle with very light winds and the currents behind me for most of the way. I was making huge time. Eventually I reached the end of Broughton Island and crossed over the bay leading to some more smaller islands separating it from the mainland further north. I was on the video camera talking about something and I heard a float plane coming up. It got closer and louder and he buzzed me! He was only a few hundred feet up. That was pretty funny and I wish I could have seen what I looked like from up there. I wish I had a PICTURE of what I looked like from up there, to show you. They must have thought I was pretty crazy. 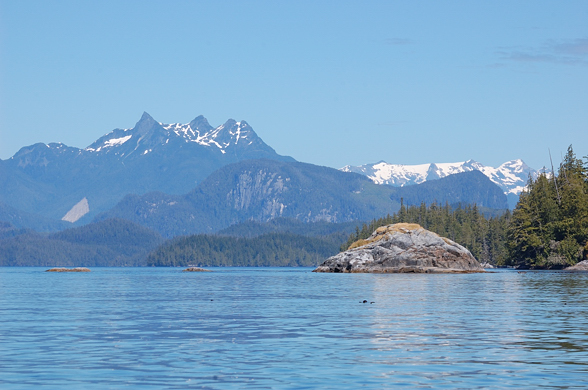 I continued along to cross the channel over to the mainland and midway across I went past a kelp patch which was obviously growing on a reef. This is the opening to Kingcome Inlet and the current was just ripping. I tied off to the kelp since it was such a neat spot to take a break, in the middle of the inlet. I took video footage of the jellies whipping by and the kelp flapping in the current. There were a couple sport fishing boats a little farther down going for halibut. They would drift, then the current would take them too far and then they would motor back up. They did this several times. It was so quiet that I could hear everything that was going on. They were several hundred meters away but I could hear everything. The sound out on the water is so much different when the wind isn’t blowing.

Chilling in the kelp. Notice how it’s horizontal from the current

They caught some halibut and I yelled out, “Nice one!” but they didn’t respond. I think they wanted to be alone. I’m sure they heard me and I’m sure everyone within several kilometers heard me since the sound traveled so well. 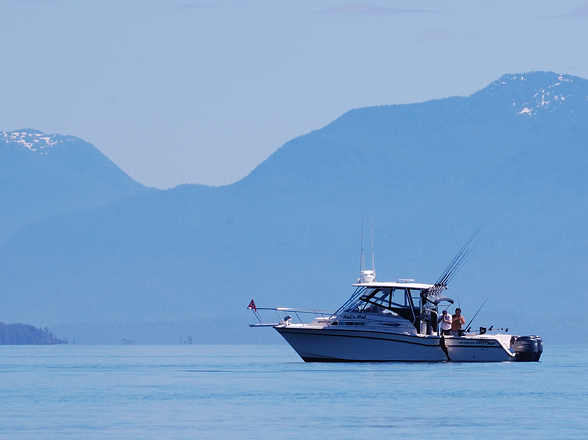 I whipped by them on the currents and was aiming for a south facing protected sandy cove to camp for the night. When I got there it was mid afternoon but the weather was still perfect. I was faced with the choice: should I risk it and push on further up the exposed coastline to look for another camping spot or be safe and call it a day? 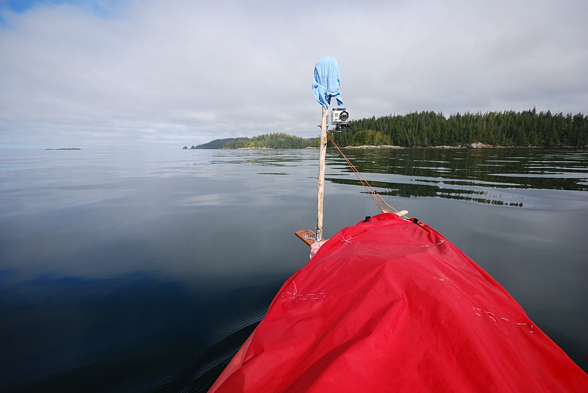 Looking forward into the unknown mid afternoon along an exposed section, without a map.

Of course I pushed on, foolishly, because I didn’t have a map of this stretch!

Looking back across Queen Charlotte Strait to Vancouver Island 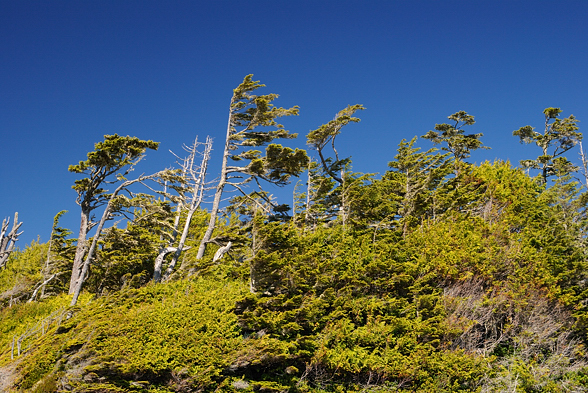 The understorey is becoming impenetrable salal and heather 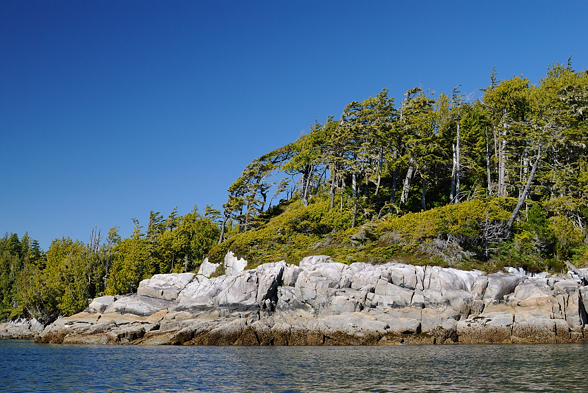 Which way do you think the wind normally blows?

Feather, probably from above loon

I went several more kilometers and when I decided that I had finally had enough I rounded a corner and the perfect camping cove was staring right at me! Right at this point I came across a large lion’s mane jelly stuck on the surface,entrapped  full of bubbles. I played with it for a while with my paddle to whack the bubbles out. It probably got them from all the wind yesterday and would surely end up on the beach if I didn’t clear them out. Well, with the jelly successfully swimming down to the bottom, that was one good deed done for the day. 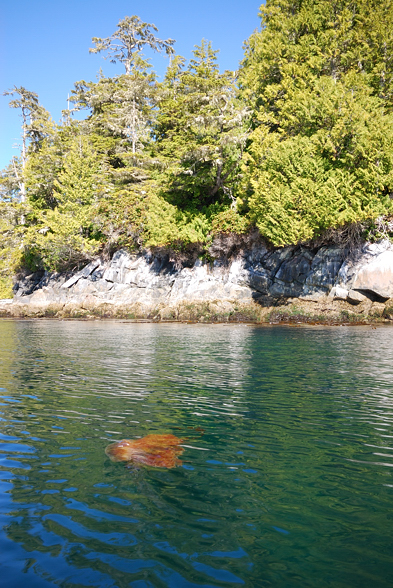 And amazingly, just as I entered the cove, the winds started to pick up! Within a few minutes it was blowing hard again and I would not want to be out on the water! What an incredible day. I had been out there in my boat non stop for 9 hours. Where does all the time go? What am I thinking about? I am learning that I don’t mind my own company.

The cove had a nice sandy spot up near the top as well as a creek! It was gorgeous! I set up camp and listened to the radio and they called for a chance of showers overnight and wind all tomorrow so I decided to take a day off after my epic paddle today, about 35 km. That would also give me a chance to fix my water filter. 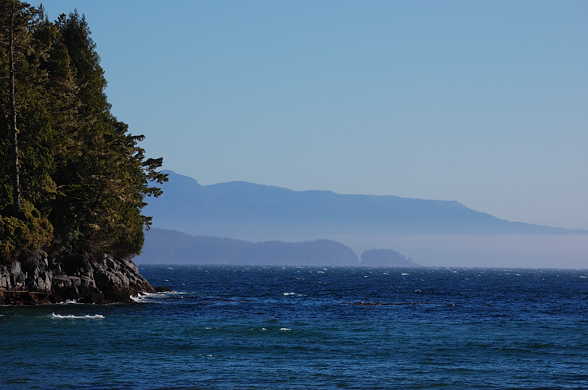 Dinner was Mediterranean pasta with brown things that seemed like chunks of meat. I had filled up my 16 GB card on my GoPro camera so that would need to be changed.

The sand here is really fine and stuck to everything. I was being paranoid with my cameras and shaking everything off anytime I touched them. The sand inevitably got everywhere. I had more brilliant insightful thoughts that evening about the sand and how many grains there are on that beach, and how that’s probably like around how many stars there are in the universe. No one’s ever considered that before… I wonder what all those other planets are like and what the life is like on them. That’s another unique thought I’m sure. 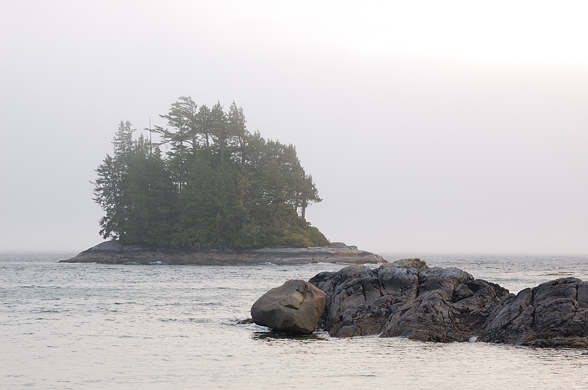 The wind combined with fog that evening 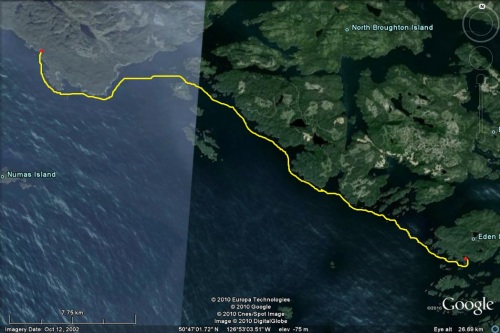 This entry was posted on September 16, 2010 by markbc. It was filed under Uncategorized .