In the morning we headed out at 9 am to catch the beginnings of the ebb tide, which we would ride for the next six hours.

morning traffic heading for the rapids at slack tide 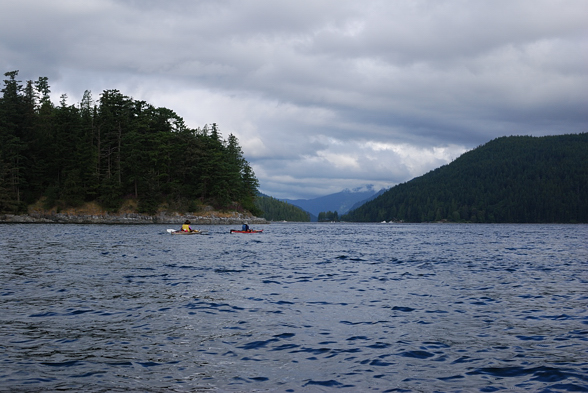 heading for the rapids

We had a strong headwind, which would end up lasting all day. We went through the little side cheater route around the next set of rapids and it was like a 50 meter long river, I could see the gradiant on the water. 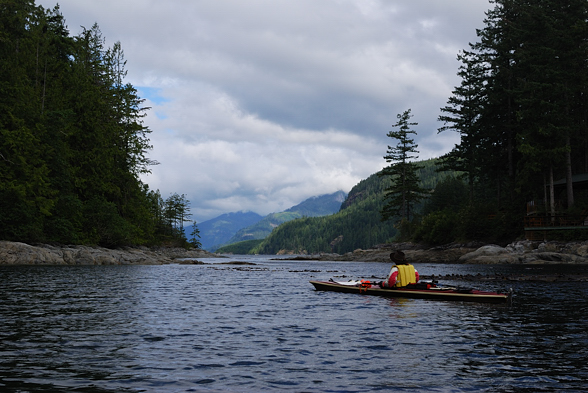 there they are …. ooh scary

Then we were back out into the main channel again with chaotic currents going everywhere.

Brian fishing after the rapids where we saw salmon jumping

back into the main channel after the rapids

You just look around for a current going your way and paddle over to it. I got caught in a few whirlpools which were fun. 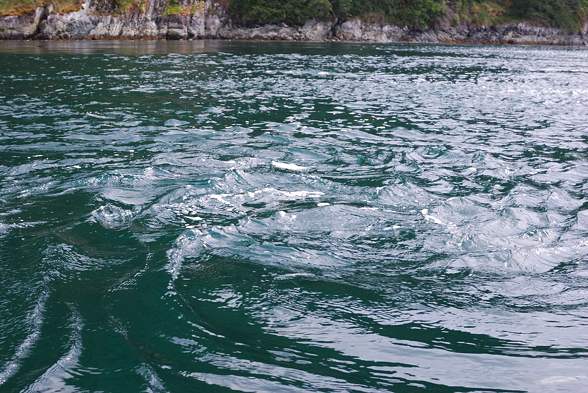 The main current was going our way but in the bays it goes the other way because you get back eddies. So I would just ride the main current a bit offshore and get slingshot from one point to the next. The headwind was strong and judging by the water it didn’t appear like I was moving. It was frustrating paddling but all I would have to do is look to the trees to see that yes, I was indeed moving.

motoring along with the currents 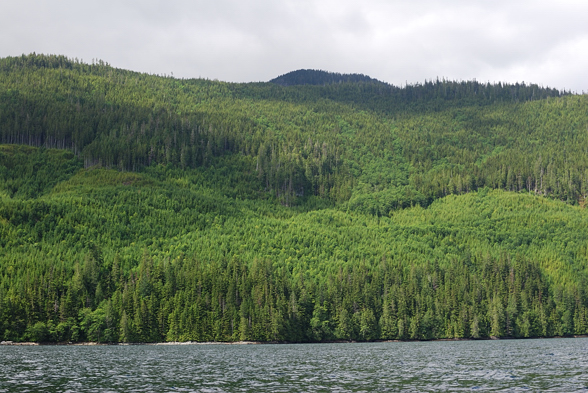 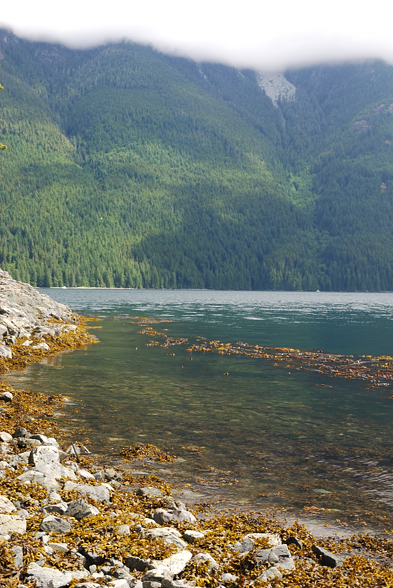 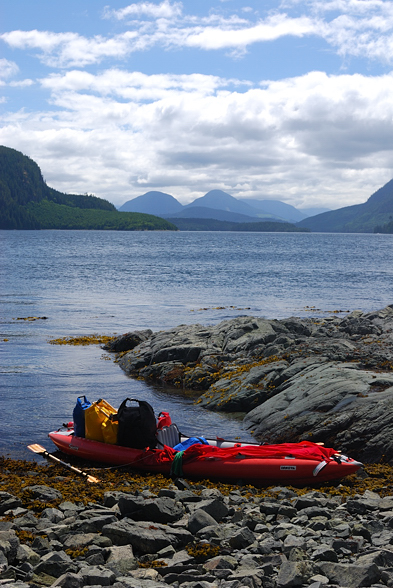 looking back towards Stuart Island

We made it to Shoal Bay after a day of constant headwinds.

It is at the northern tip of East Thurlow Island and faces up to the mainland up Philips Arm and the Philips River. I had stayed in Shoal Bay many years before when I worked in forestry up the Philips River. It is major grizzly country up Philips Arm and a couple of the people at Shoal Bay had seen one that day at the estuary at the head of the inlet. They got pretty close and the motor on their boat wouldn’t start either after many pulls. Luckily grizzlies don’t seem to be bothered by boats. Apparently what they don’t like is bipedal movement, so all the observation places around have cover from the waist down so the bears can’t see your legs. A guy at the grizzly tour place in Telegraph Cove told me he always tries to ford rivers up to his waist. The bears apparently just see boats as part of the scenery. So I am thinking maybe I should have bought a dress to bring along with me after Telegraph Cove, to avoid a confrontation with a grizzly. Oh well, too late now.

Shoal Bay was like paradise. We arrived just as someone finished mowing the large lawn and let us camp for free. There were about ten boats in the bay, mostly Americans, and it offered a really friendly “pub” which was more like a cottage they allow guests to come in and socialize. And they had free internet! And I remembered from when I was here before seeing lots of Dungeness crab in the sandy bay so I set the trap again and we got lots of crabs too! This place is awesome!

the pub at Shoal Bay 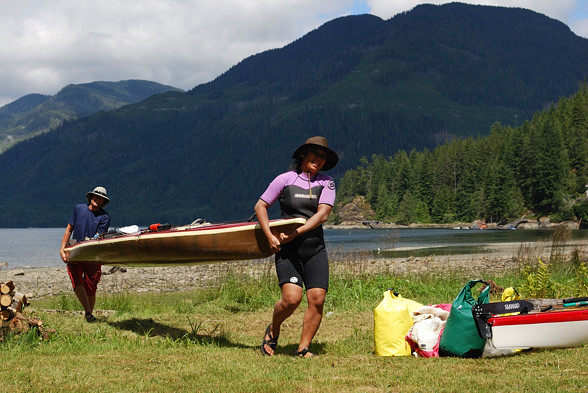 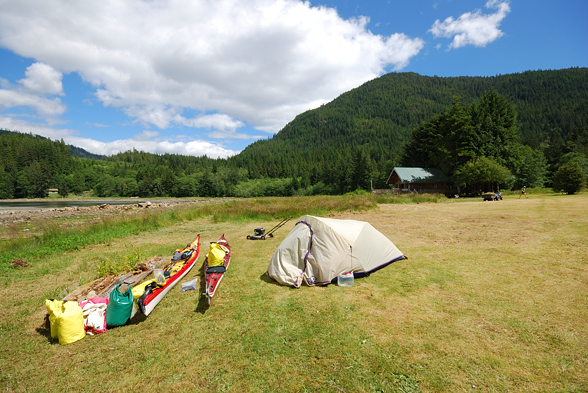 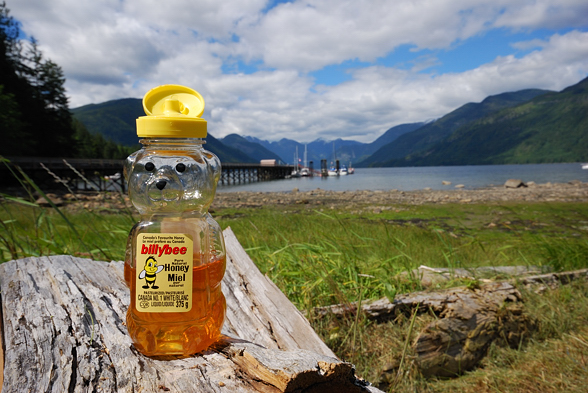 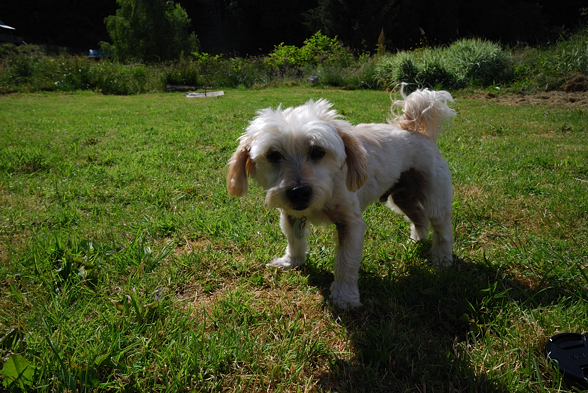 Shoal Bay as seen from the wharf

crabs ready to be sorted. Most were small or female to be thrown back.

salmonberries. Not sure if they’re called this because of their colour, timing, or habitat. Maybe all three. 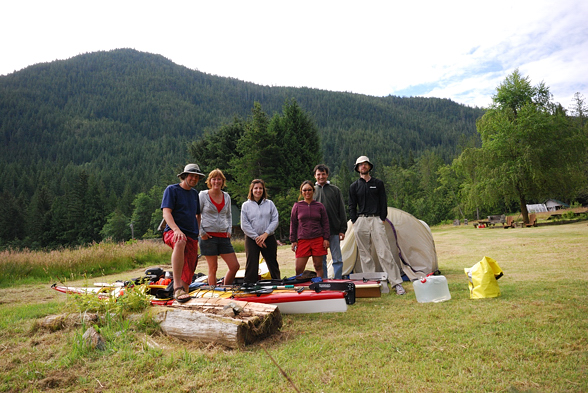 And Shoal Bay has an interesting history. At one point in the distant past it had the largest population north of San Francisco! This was due to the gold mine just up the hill. Now the population is about five. There were mostly Americans on their boats there and we were invited onto a beautiful trimaran built and owned by Howard and his wife, from around Tacoma. They were going to circumnavigate Vancouver Island but the nut on the bolt holding his mast up came loose and the mast fell down so now he is motoring back. It is a very nice boat and Brian wants to someday move to Australia and build a trimaran. The advantage of trimarans and catamarans is their shallow draft which allows you to get into small coves and just beach it during low tide. You can’t do that with a sailboat. Plus I have heard of reports of ocean-going sailboats ramming into whales sleeping just below the surface. I wouldn’t want to do that, it’s not too good for the whale. In a trimaran you’d just whack it and glide over, not cut it in half with your keel. This tour of his boat rekindled my interest in sailing across the Pacific one day.

Earlier in the evening two Americans, they had obviously known each other for a while, got into a heated left versus right political argument about the deteriorating state of the American economy. Americans certainly have some strong opinions these days, and I can see why with the state of their economy, and it will affect Canada too since we mostly service the US, and we haven’t had our bubble burst yet.

Reluctantly, we left Shoal Bay the next morning and rode the tides along to the next set of rapids, but not before first stopping at a fishing lodge which reportedly has great German food.

Unfortunately you have to order several hours in advance but we had some great apple strudel with ice cream. I managed to send off one email. Also here was a hummingbird feeder which at any given moment had about five of them buzzing around. I regret not taking video of it. I also realized that I forgot in Shoal Bay the cable I use to run my computer off AA batteries, but I decided that it would be easier to make a new one in Telegraph Cove than try to get the old cable sent up. And we arrived just in time to watch Spain beat another team in the World Cup, which Bryan was very happy to watch! Out in the middle of the wilderness!

We left a couple hours later and shot the rapids at slack tide which was nothing. We saw some porpoises but Bryan and Maggie seem to have much better luck seeing them up close than I do.

The headwinds again picked up and we crept along the shoreline to the campsite opposite Loughborough Inlet. It was a nice spot in open forest. I was so hungry and tired so I just cracked open the Chunky soup I brought from Big Bay and wolfed that down. As usual, Bryan went out and caught fish.

The next morning greeted us with strong headwinds, and they did not abate all day. Holy cow, was that wind strong. We fought it all day and managed to go eight kilometres. We crossed the channel and from there just inched our way up from bay to bay, powering around the howling points. Most of the time I couldn’t move, I was just paddling to stay in one spot, and then the gusts would lull a bit and I’d move forward some and repeat the procedure. It was actually a real waste of energy, but apparently these northwest winds blow all summer so we could have sat there for a week waiting for them to subside. We finally got to our campsite around a very windy point (I’d say we were going into 35 knot gusts for sure at times), with four foot waves, and my boat handled it fine. This point sported a lone arbutus tree, since we were heading more west towards the drier eastern side of Vancouver Island.

landing on the windy bear beach 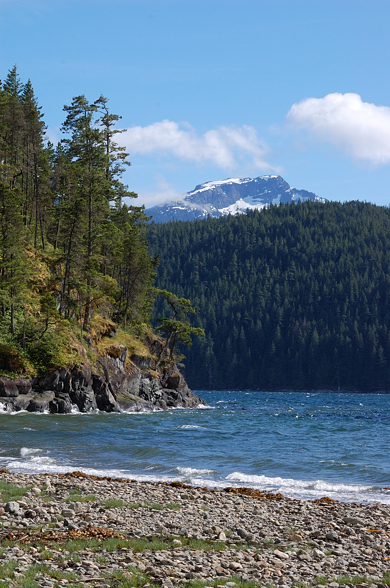 This campsite just screamed bear habitat — a wide grassy beach on a flat creek valley bottom. I was expecting to see one at any time.

But all we had was the howling wind which was really starting to bother me. I just went in my tent for half an hour to get out of it. It was a beautiful spot, just very windy at that time. It had lots of glasswort on the beach, an asparagus-like plant you can eat. You have to boil it lots because it is so salty but I had a lot of it for dinner with no problems. 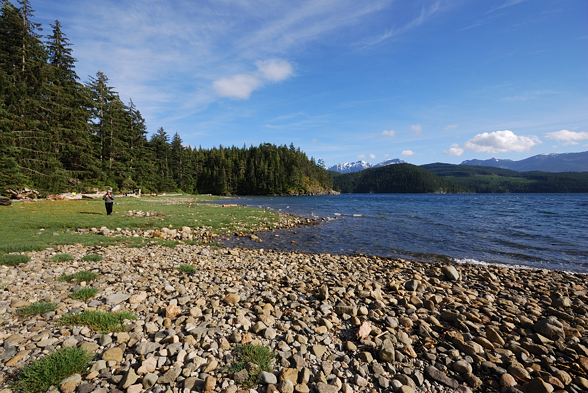 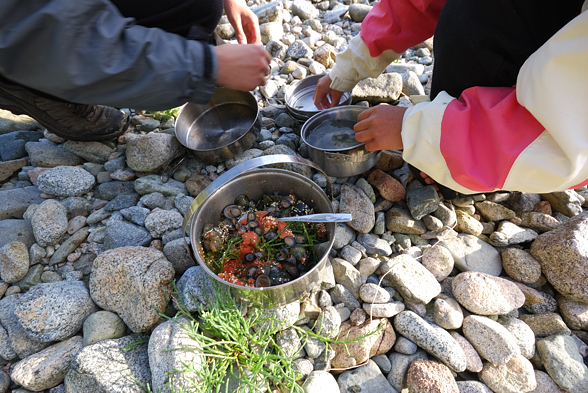 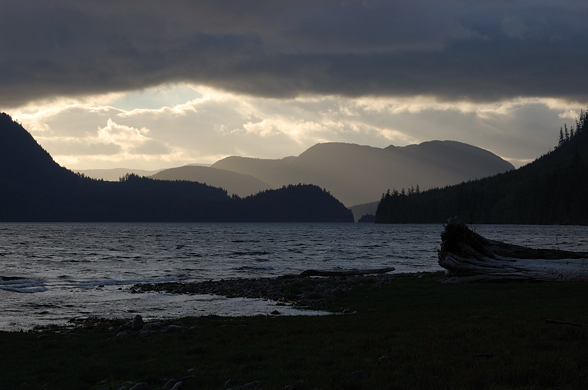 Bryan had wanted to take the route north up the channel separating Hardwicke Island from the mainland because there is a greater chance of seeing bears there. But we (I) also needed to resupply in Sayward, since if we were going to fight headwinds all the way to Telegraph Cove, I did not have enough food. So we decided to instead head for Johnstone Strait and Sayward. Almost immediately upon leaving our campsite after a convoy of yachts went by and soaked Brian as he was getting gin his kayak, he looked back to the beach and saw a black bear right near where we camped! So he got his wish and we continued on across the channel to a sheltered area where Brian beached and emptied his kayak of water

looking across Johnstone Strait to Vancouver Island from Hardwicke Island 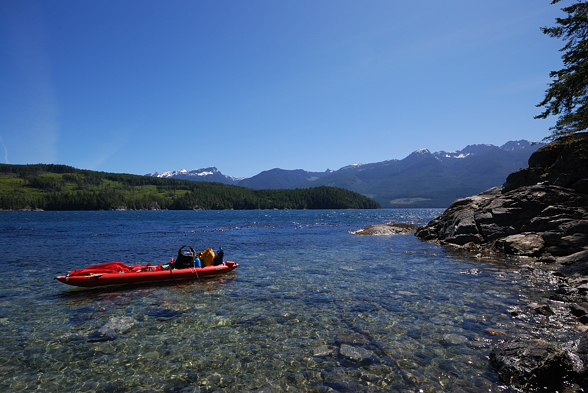 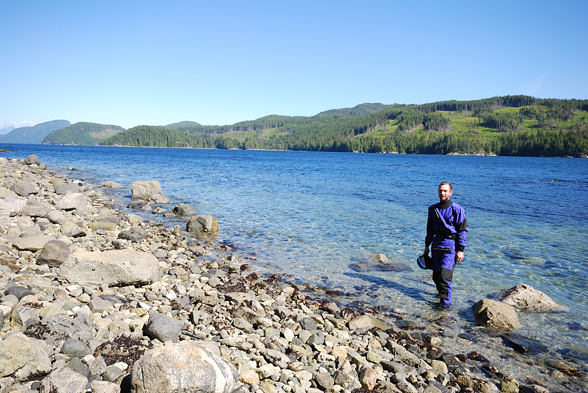 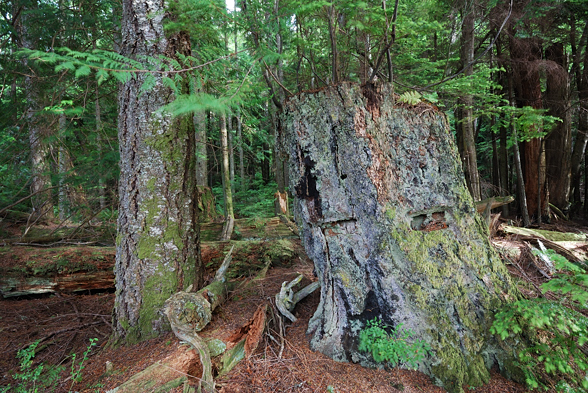 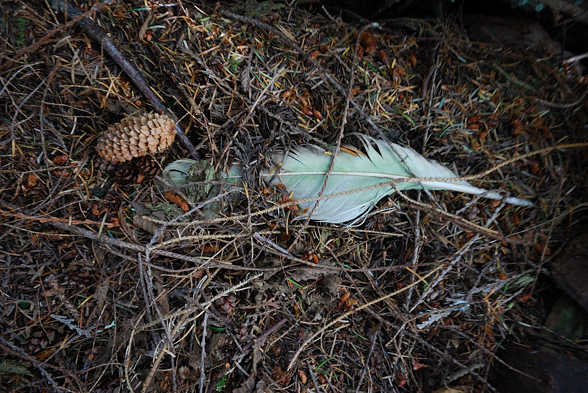 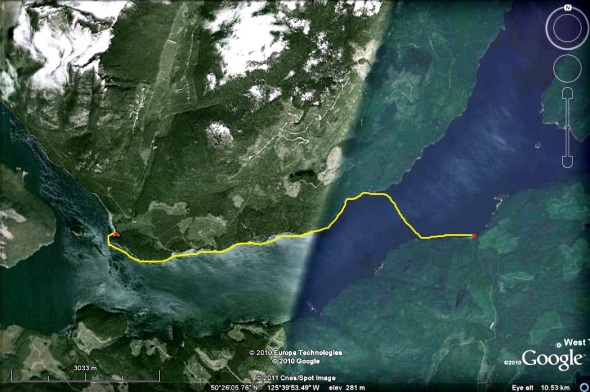 We crossed Johnstone Strait at Helmcken Island which was uneventful.

and fought the headwinds hard into Kelsey Bay. We had to cross the shallow bay to get to the dock and man were those waves big! What a way to end the day!

We were so hungry. We walked 15 minutes into Sayward and checked out the store which was a vision, and then walked a further 10 minutes up the road to the only restaurant / pub in town. We ordered probably the best hamburger I have ever had. I was so hungry, and we started with a beer on an empty stomach. We all ordered the deluxe with poutine, for like ten bucks! Oh man, we were in euphoria for an hour.

walking to the store in Sayward 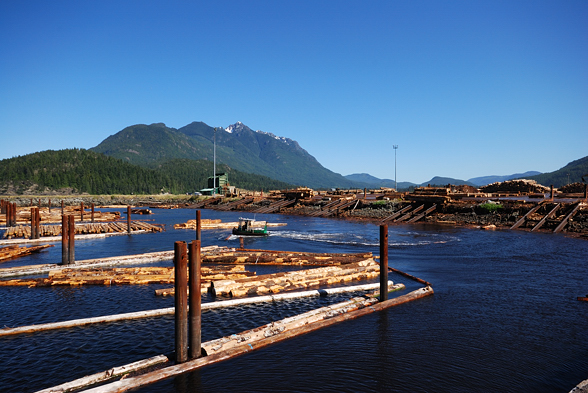 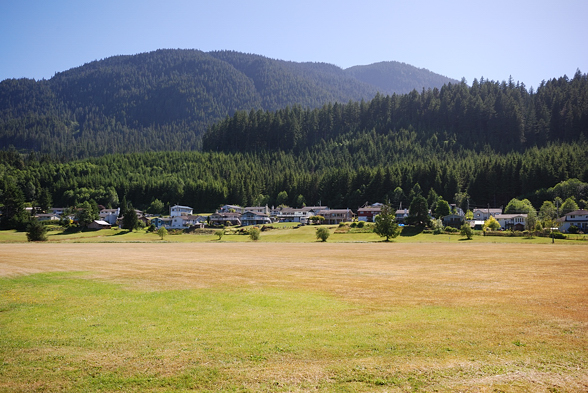 walking the highway to the only restaurant in town

there it is, the only restaurant in town

Then we resupplied with food at the store at very good prices, and got a ride back out to Kelsey Bay where we were camped. The winds continued all evening and a few cruise ships went by. 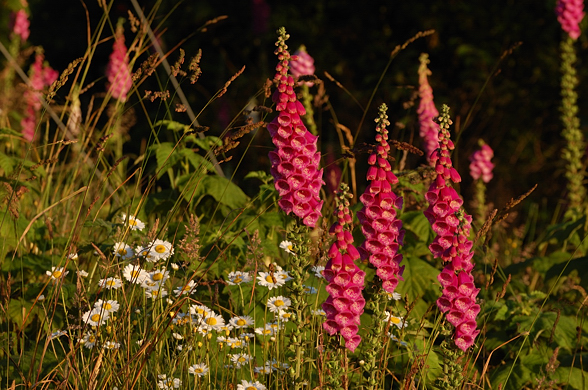 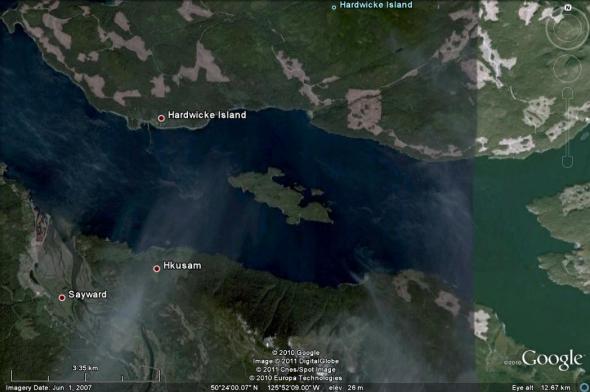 This entry was posted on July 18, 2010 by markbc. It was filed under Uncategorized .