I seem to have a knack for going kayaking on very windy days. I took the Canada Line skytrain to the 99 B line bus, and this along Broadway Ave. to where I pulled out on Day 1. It was a beautiful day, but very windy from the west. I set up on the beach and tried to put in, but my kayak got swamped by the waves. It would have been possible if necessary but I would have been sitting in a few inches of water, without a bailer. Although my kayak handles well in big waves, it doesn’t launch well in them. This makes me feel even better about my planned detour around Cape Caution north of Vancouver Island – a 30 km stretch battered by the open ocean. I’ll avoid the big seas by rerouting through the mountains inland, prime grizzly country…… just what I’m looking for.

So instead I packed my stuff a little farther down the beach to the lee side of the yacht club, which was pretty calm. Along the way I passed a beached sailboat in the exact spot which I pulled out from last time. The day after, a major record-breaking windstorm had hammered the coast all day, cancelling ferries and beaching many boats. 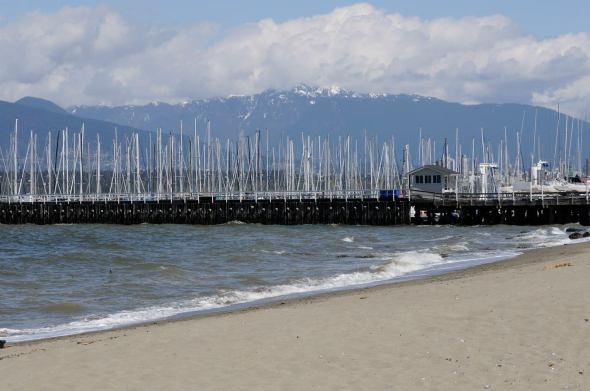 The sandy trail around the back of the yacht club 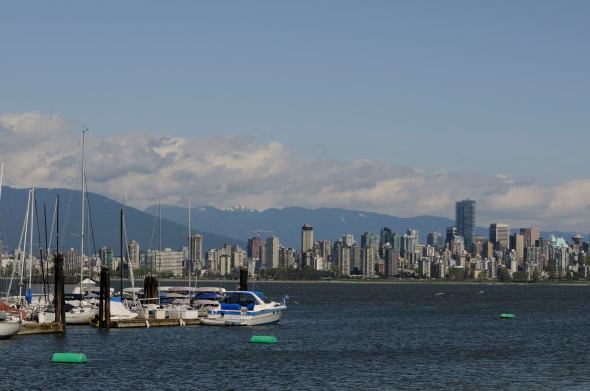 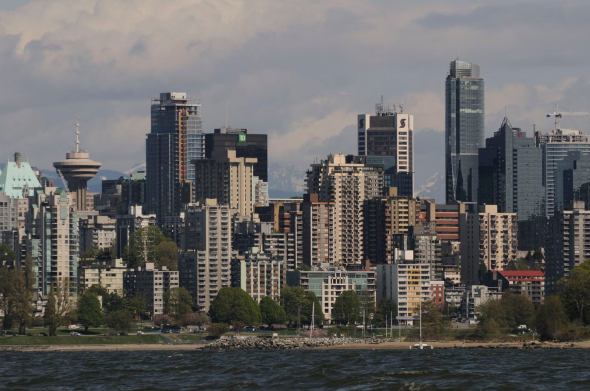 Unfortunately, when my kayak got swamped in the surf, my underwater camcorder housing hit the sand and it got in the controls, so most of the footage taken that day was not worthy since the video was stuck zoomed all the way in to my shirt. And I didn’t have the mike on properly so I got no audio. But I have a little bit of video, which I will upload later when I set it up with WordPress.

I quickly blew eastwards towards downtown. The waves were breaking. When I neared Kits Beach I could see more beached sailboats, but the wind died down a bit. I was having fun just bobbing around in the middle of the bay and I thought I made some videos but they unfortunately didn’t turn out. I’ll have to make a couple modifications to the system to make it easier, but it’s definitely beginning to produce some quality video ….. when I haven’t zoomed all the way in from sand in the controls ….. and there isn’t water on the viewing lens ….. and I have switched the mike on … and the mike is on the right channel ….  It all sounds very obvious but when you are out there in the elements with salt water spraying everywhere and it’s so bright in the sun that you can barely see what the camcorder’s viewscreen is doing, it’s easy to miss any one of the five things you need to do right in order to get the video to work. But the more I do it, the more I’ll figure it out. 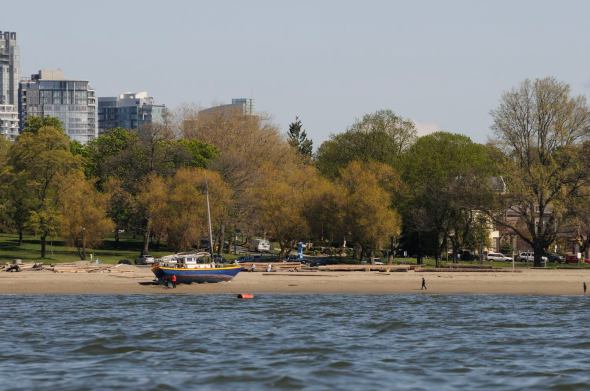 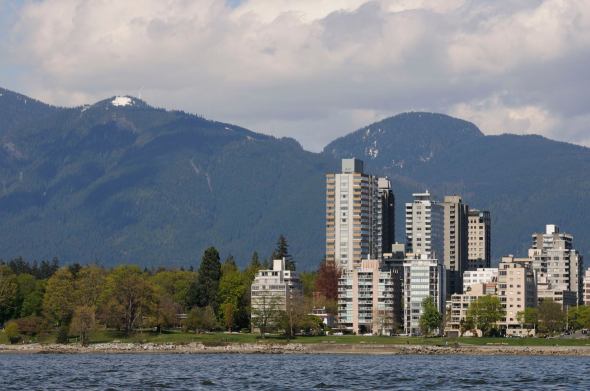 I crossed over towards Beach Avenue and had fun looking at all the cars and people. It seems kind of weird to see human civilization from this vantage point, almost out of place, with everyone crammed like sardines into the land, fighting over half million dollar tiny condos, right next to all this openness. Maybe the next step will be floating condos. Wait … wasn’t that a bad Kevin Costner movie? Waterworld. With the money everyone’s making off real estate development here, I wouldn’t be surprised by any scheme they come up with.

Grouse Mountain had its wind turbine going full speed, which doesn’t seem too fast with a full turn every 5 seconds or so. But then consider that the circle is the better part of 100 meters across. Those tips are moving really fast. That’s 150 meters in a couple seconds, which is near 200 kilometers an hour. This turbine is on top of one of the southernmost peaks of the Coast Range which I plan to encircle. From here on, I’ll generally head northwards with the mountains on my right. To the south, the range breaks up into more scattered volcanoes through the Seattle area. It kind of becomes the range known as “The Cascades”, but those mountains are further inland than the Coast Range is, which meets the ocean with a myriad of inlets of islands. 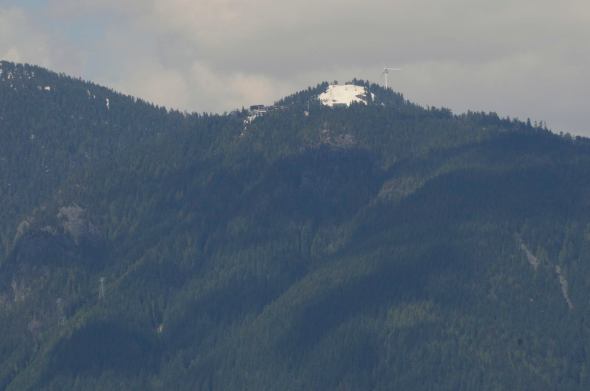 I used to hike up that mountain on the Grouse Grind, a trail that goes from the bottom left up to the building. For over a year I have been out of commission with nerve damage in my leg which led to atrophy of my quads, and then severe tendonitis in my knee after foolishly pushing it too hard when resuming activity after the nerve problem was fixed. I hope to be back in action in a few months, and I'll need it if I want to descend the Taku. 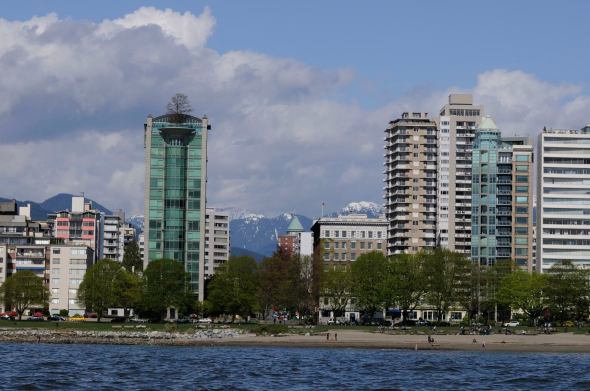 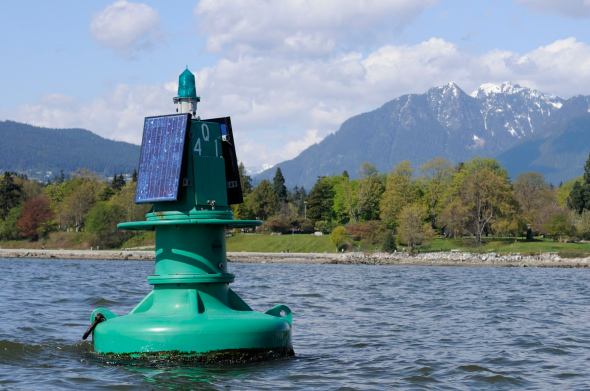 I turned left to head back west to round Stanley Park. Then, of course, the wind picked up again. And I’m not just imagining it simply because I turned into the wind, since the trees on shore were all confirming to me that, yes, it actually was blowing really hard with big waves. Every time I hit one I’d get sprayed with water, and I would have gotten quite cold if I wasn’t paddling so hard. Half the energy I expended all day was just to go that 1 km around Stanley Park. And I didn’t bring any warm weather clothing. But once I rounded the point in Stanley Park I could turn northwards and then had a cross wind to deal with, which made it faster going, but a few times I had to turn to avoid getting slammed sideways by large breaking waves.

I began crossing the entrance to Burrard Inlet, near the Lions Gate Bridge. The waves became choppy and unpredictable since the tidal flow into and out of the inlet was mixing with the wind-generated waves. There was an eerie lack of boat traffic here. It is one of the busiest ports on the coast of the continent, and I didn’t go by a boat of any kind the whole time around Stanley Park. I was expecting at least some sailboats to be out taking advantage of the wind.

I reached Ambleside Park in West Vancouver but the large waves would have made pulling out on the beach an unpleasant experience. Luckily there is a public wharf and dock nearby so I tied up to that, which was almost high and dry with such a low tide. I was getting cold but managed to pack up and then walk a few hundred feet to catch the 252 bus to Park Royal, then the 239 to Capilano Road, then the 246 Highland to get back home.

Mount Baker in Washington State, a dormant volcano, as seen from near the Lions Gate Bridge 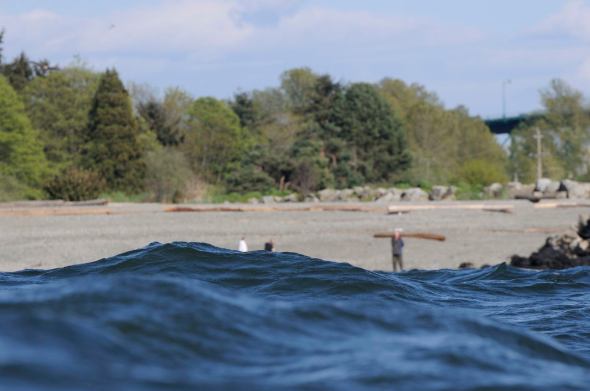 The view from the trough of a large wave

My wrist didn’t give me any trouble, even though it has been bothering me lately otherwise. It’s weird how small movements with the computer mouse can give you painful tendonitis, but strenuous paddling doesn’t. I use the same tendons on the upstroke. I was surprised by how strong I was. That is my biggest fear for this trip – being stopped in my tracks by tendonitis. Not bears, hypothermia, loneliness, starvation …. but tendonitis. Luckily, I will know within the first week if it’s going to be a problem and so far it doesn’t seem to be. I’ll just have to limit my computer time and thankfully I’ll have no choice in the matter given the battery limitations. Although, I managed to figure out how to run my computer off 14 AA’s for about half an hour, and these can be charged with my solar panel in a day. I don’t think I will have a lack of battery power on this trip.

This entry was posted on April 24, 2010 by markbc. It was filed under Uncategorized .